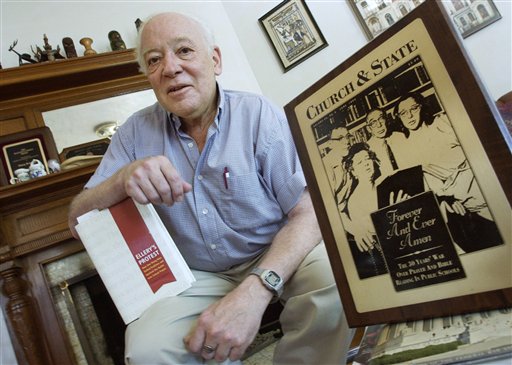 Ellery Schempp, the student involved in the landmark 1963 U.S. Supreme Court case Abington School District v. Schempp, poses in his home in 2007. Schempp's civil disobedience in 1956 leading to the Supreme Court striking down devotional exercises in schools is the subject of a book "Ellery's Protest" by New York University law professor Stephen Solomon. (AP Photo/Lisa Poole. Used with permission from The Associated Press.)

The Supreme Court decision in Abington School District v. Schempp, 374 U.S. 203 (1963), invalidated the reading of verses, without comment, from the Bible and the Lord’s Prayer in public school settings. These practices had been challenged by the Schempps, Unitarians from Pennsylvania.

Madalyn Murray and her young son William, both atheists, had challenged a similar practice in Maryland, leading to the companion case Murray v. Curlett (1963). The Schempp decision followed one year after the Court’s ruling in Engel v. Vitale (1962) striking down public prayer in schools.

Acknowledging that Americans were religious, Justice Tom C. Clark in the Court’s Abington opinion noted that they were also bound by the establishment clause of the First Amendment, which forbids the recognition of one religion over others and government recognition of religion in general.

The clause, he asserted, required government “neutrality” toward religion; although the practices in question might seem to be relatively minor encroachments, “the breach of neutrality that is today a trickling stream may all too soon become a raging torrent.” Clark held that the court was not attempting to establish a “religion of secularism.”

Although ending devotional exercises in public schools, the decision did not mean “that such study of the Bible or of religion, when presented objectively as part of a secular program of education” would violate the First Amendment. The “exalted” place of religion in American society was to be “achieved through a long tradition of reliance on the home, the church and the inviolable citadel of the individual heart and mind.”

Justice William O. Douglas wrote a concurring opinion, in which he asserted that the establishment clause not only precluded the state from “conducting religious exercises,” but also from employing “its facilities or funds in a way that gives any church, or all churches, greater strength in our society than it would have by relying on its members alone.”

In a concurring opinion, Justice William J. Brennan Jr. examined the relationship between the establishment and free exercise clauses, but he warned against “a too literal quest for the advice of the Founding Fathers upon the issues of these cases.” He made four observations:

Based on cases in which the Court had relied chiefly upon the establishment clause, Brennan concluded that the practices at issue could not be justified on the basis of secular purposes, being nonsectarian, or exempting students who did not want to participate.

He also offered that the decision would not require changes in the provision of chaplains in the military, invocational prayers in state legislatures, non-devotional teaching about religion in public schools, tax exemptions for religious institutions, religious considerations (for those, for example, who could not work on Saturday) in the granting of welfare, or activities with religious origins that had ceased to have religious meaning.