By Thomas R. McCoy
Other articles in General Legal Concepts and Theories 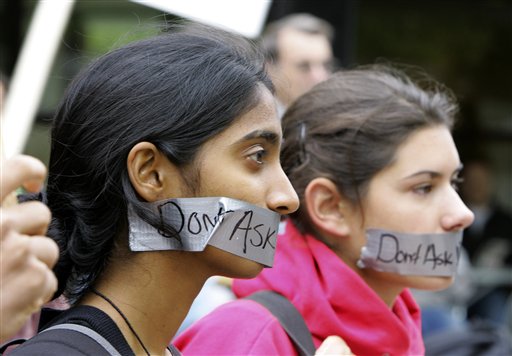 Harvard Law school was one of a group of law schools that challenged the Solomon Amendment, which said that if an institution denied military recruiters equal access to campus, the entire institution could lose certain grant funds. The law schools said the Solomon Amendment created an unconstitutional condition because it restricted their First Amendment-protected symbolic speech of refusing to allow recruiters on campus -- conditioning the receipt of grants on refraining from its symbolic speech. The Supreme Court disagreed, emphasizing the Solomon Amendment regulated what universities must do, not what they must or must not say. In this photo, Harvard Law School students Vaidya Gullapalli, left, and Kristin Small attend a protest against the U.S. military's "Don't Ask, Don't Tell" policy and the presence of military recruiters on campus, Wednesday, Oct. 12, 2005, in Cambridge, Mass. (AP Photo/Michael Dwyer, used with permission from The Associated Press.)

However, if a court establishes that a restriction is reasonably necessary for the effective performance of the contract, the unconstitutional conditions doctrine will not apply, and the court will uphold the contractual restriction on speech.

A position with the Central Intelligence Agency (a valuable government benefit) is an example of a job that is routinely conditioned on an individual’s acceptance of significant restrictions on the individual’s freedom to speak about classified information to which the individual will have access. Because such speech restrictions are essential to the effective performance of the CIA agent’s employment contract, the Supreme Court decided in Snepp v. United States (1980) that the unconstitutional conditions doctrine does not apply to the speech-restrictive condition in the CIA employment contract.

Similarly, the Court decided in Rust v. Sullivan (1991) that when an individual is employed by the government to engage in family counseling using government-specified speech, the individual contractually agrees to forego the advocacy of his or her own viewpoints during the counseling time for which the government is paying. The unconstitutional conditions doctrine imposes no barrier to such necessary conditions in government contracts.

In contrast, where a government employment or grant contract imposes a speech restriction that is not related to the effective performance of the contract, the contract condition will be found to be an unconstitutional. In effect, the government cannot use a financial incentive to discourage unfavorable speech if said speech is in no way related to the performance of the contract. For example, the Court decided in Elrod v. Burns (1976) that a city government cannot offer employment as a police officer on the condition that the employee refrain from making speeches in his or her spare time that are critical of the mayor’s political views.

It is important to note a direct corollary of the unconstitutional conditions doctrine: If the government can regulate a particular course of conduct without violating the Constitution, then the government may “condition” a grant of benefits on the recipient’s agreement to refrain from said conduct.

Pursuant to this corollary, the Court in Rumsfeld v. Forum for Academic and Institutional Rights (2006) rejected an unconstitutional conditions challenge to the Solomon Amendment, which withheld federal research grants from any university and its affiliated law school if they refused to host U.S. military recruiters on the same terms as nonmilitary employment recruiters.

In Rumsfeld, a group of university law schools asserted that by banning military recruiters they were expressing their opposition to the military’s policy on homosexuals, and they asserted that this exercise of symbolic speech was protected by the First Amendment. The law schools further argued that in withholding the benefit of university research grants as a penalty for their exercise of free speech, the government was violating the unconstitutional conditions doctrine.

The Court disagreed. In its view, Congress would not have violated the First Amendment if it had directly fined the law schools for their refusal to host military recruiters, because the law schools had many other ways to communicate their political views. Thus, the Court held that the unconstitutional conditions doctrine did not prevent Congress from indirectly penalizing the schools for their actions by withholding the benefit of substantial federal research grants.