By Brian Caterina
Other articles in Laws and Proposed Laws, 1900-1950, Freedom of the Press issues and topics 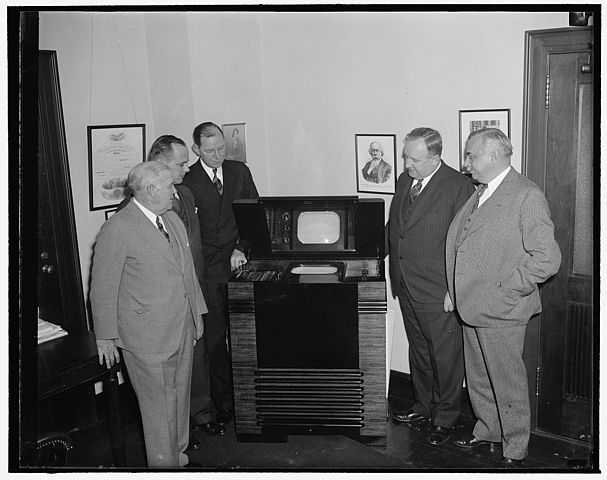 Members of the Federal Communications Commission inspect the latest in television, Washington, D.C., December 1, 1939. The FCC was established just a few years earlier by the Communications Act of 1934 and were then considering new regulations for commercial television. (Photo from the Harris & Ewing collection at the Library of Congress, public domain)

The Communications Act of 1934 set out the basic legal framework for governing communications in the United States, joining the regulation of common carriers and radio broadcasting, which previously had been treated separately.

Communications Act of 1934 established the FCC

It established the Federal Communications Commission (FCC) as an independent government agency to regulate nonfederal government use of the radio spectrum (including television) and interstate telecommunications (via wire and later satellite and cable).

Rather than establishing new regulations, the 1934 communications act largely incorporated existing legislation. In addressing the issue of common carriers, it drew upon regulations first applied to transportation services, such as railroads in 1889, and in particular the Mann Elkins Act of 1910, which had extended the authority of the Interstate Commerce Commission over communications.

Common carriers, classified as public utilities, are available to everyone at a reasonable price and are not originators of messages or content. The communications act thus treated telephone services as a utility providing a network of access to people independent of content.

The statute recognized in large measure a de facto, regulated monopoly that American Telephone and Telegraph (AT&T) had established as early as 1913, when it gained government approval to offer the majority of national telephone services. Congress viewed this particular monopoly as providing the necessary efficiency for the establishment of national and universal phone service.

Concerning radio, the 1934 law largely incorporated the regulations from the Radio Act of 1927, which primarily involved the regulation of frequencies. The new law granted licensees sole control over their frequencies, thus providing for the orderly development of the radio spectrum.

Radio communication itself was viewed as a content provider and thus exempted as a common carrier. Private corporations had responsibility for the communications’ content. The 1934 law made no provision for a public broadcasting service, and lawmakers rejected a proposal allocating 25 percent of the broadcast spectrum for the use of nonprofit and educational stations. In lieu of separate educational stations, the law required broadcasters to develop public interest programming and to provide a platform for discussion of controversial issues.

Although radio broadcasting is a commercial enterprise, certain of its aspects lend it a public character.

Congress therefore recognized the airways as public property, not to be owned, noting their “public interest necessity and convenience.”

The fairness doctrine evolved from the act as a public service by requiring broadcasters to air programming on controversial topics and to provide equal time to candidates for political office. Although the act did not permit the FCC to regulate broadcast content itself, it did allow the commission to ban obscene or indecent programming.

In 1941 the FCC asserted the power, affirmed by the Supreme Court in National Broadcasting Co. v. United States (1943), to regulate relations between networks and affiliates. Based on the need to maintain competition, and in the process promote a broader diversity of viewpoints, the FCC forced NBC to sell its noncommercial Blue Network and also limited broadcast hours.

The 1934 act designated broadcasters as speakers — thus granting them First Amendment rights — but the broadcast media were also treated as possessing a somewhat lesser claim to First Amendment protections than the print media. The Supreme Court’s decision in Red Lion Broadcasting Co. v. Federal Communications Commission (1969) upheld the principle that the scarcity of frequencies put broadcasters under public obligations to present multiple viewpoints, which therefore served as limits on their First Amendment rights.

Some critics of electronic media, including Newton Minow, who served as FCC chairman from 1961 to 1963, have argued that the broadcast media have failed to carry out their public service obligations especially in education.

In 1952, the FCC allocated 12 percent of frequencies to non-commercial educational television, but the frequencies were underused. The Educational Broadcasting Act of 1962 increased funding for educational television, but a major impetus was provided by the Carnegie Commission on Educational Television. Consistent with the report, President Lyndon B. Johnson supported legislation establishing the Corporation for Public Broadcasting, which was created in 1967. The rise of public broadcasting as a competitor to the networks has led to periodic allegations of a liberal bias, which served to limit its funding and development.

Tension continues between broadcasting as a for-profit enterprise driven by economic concerns and its public interest obligations of a noncommercial value.

During the New Deal, this tension was addressed through the creation of large corporate entities regulated and balanced by public obligations. By the mid-1970s, this tension had given rise to an anti-regulatory movement, which during the Reagan era emerged as an unusual coalition of technological radicals and free market neo-liberals.

Free marketers argued for viewing broadcasters not as community trustees, but solely as marketplace participants.The broadcasters’ First Amendment rights, through the lens of the market model, should be primary. The neo-liberals and the technological radicals mistrusted bureaucratic control because it threatened to block the emergence of new technologies. From the radicals’ perspective, deregulation would lead to the democratization of technology and communications. The Reagan administration moved to deregulate the telephone and broadcast industries. Rapid technological innovations continue in both.

This article was originally published in 2009. Brian Caterino is a writer living in Rochester, New York. He received a PhD in political science from the University of Toronto and taught for several years at SUNY-Brockport and the University of Rochester. He also worked in a public access channel for many years. A protest over the seizure of this public access channel was indirectly the spur for the Supreme Court case Town of Greece v. Galloway, for which he provided video materials. Among his academic work, he recently published The Decline of Public Access and Neo-Liberal Media Regimes (Palgrave Macmillan 2020) which deals in part with free speech issues in communications media.