By Margaret Tullai
Other articles in Laws and Proposed Laws, 1900-1950 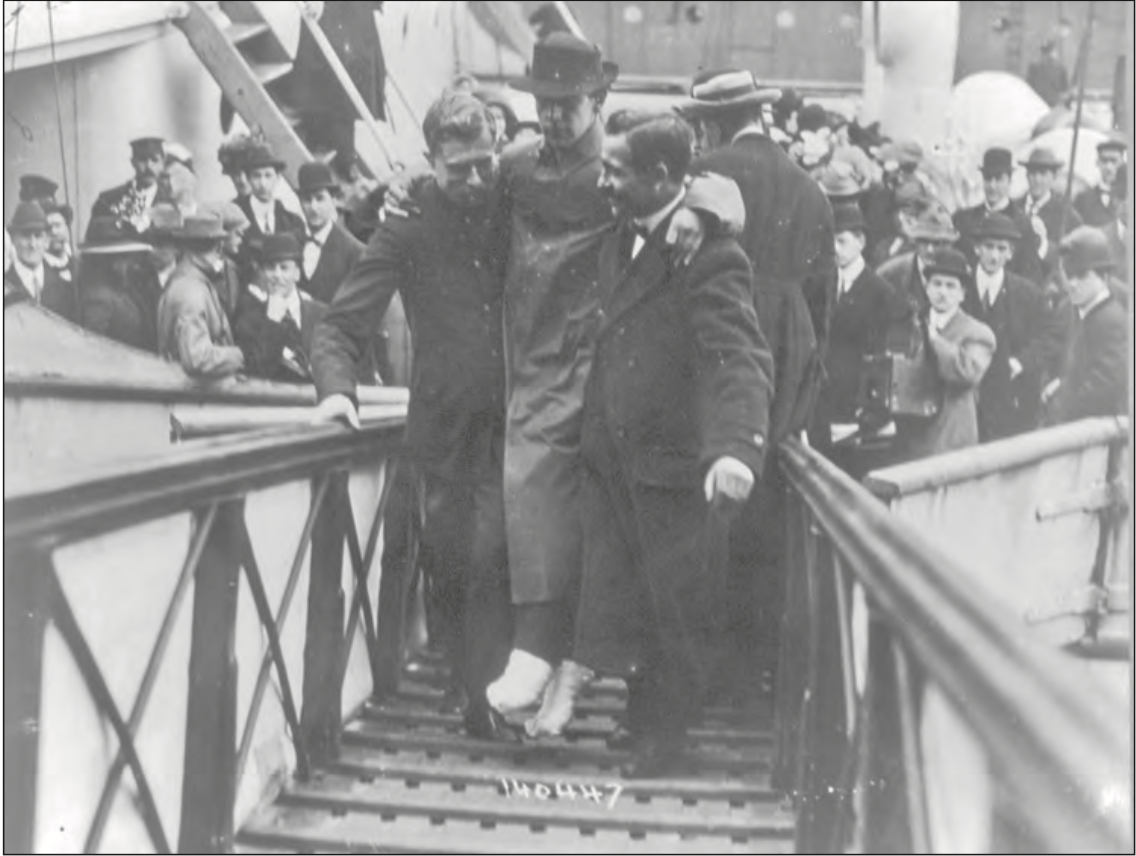 Harold Bride, a wireless operator who survived the sinking of the Titanic, is carried up the ramp of a ship in May 1912. Later investigations into radio traffic on the night the Titanic sank revealed flaws in the Wireless Ship Act of 1910, such as lack of priority for distress calls from sea and no requirements for ship radio operators to monitor radio transmissions at all times. Later laws addressed these issues, and laid the foundation for regulation of radio as a mass medium. (Photo via Library of Congress Prints and Photographs Division Washington, public domain.)

The act required cruise ships departing U.S. ports with 50 or more people and traveling 200 miles or more to have radio equipment and a skilled operator onboard. Additionally, to prevent a global monopoly in radio communications and to promote efficiency in radio transmissions, the law mandated that the equipment and operators be capable of exchanging messages regardless of the communication system employed.

The early twentieth century saw rapid advancements in wireless communications and growth in the popularity of cruise ship travel. The telegraph and telephone had facilitated long distance communication beginning in the nineteenth century, but these had been limited by the physicality of wires and its person-to-person modality, among other things.

The development of wireless communications overradio waves enabled more efficient long distance communication and was particularly useful for relaying messages for military purposes and in commercial ventures such as ocean travel. At the same time, wireless technology was creating a mass communication medium, as amateur radio operators broadcast voice and music.

Conflict emerged, however, as military, commercial, and amateur interests competed for radio frequencies over the limited, and still unregulated, airwaves. Additionally, the British and American Marconi companies, the largest wireless conglomerate in the industry, were increasingly reluctant to enable communications with ships or stations that used their competitors’ equipment.

The international community subsequently sought to bring order to the emerging medium, mainly to promote safe and efficient communication at sea.

Key provisions ratified by 33 nations at the Berlin International Radiotelegraphic Conventions of 1906 included requiring radio equipment and operators on ocean liners, standardizing radio protocols, opening wireless communications regardless of the corporate affiliation, and giving emergency messages priority over the airwaves.

Although active at the conference, the United States did not ratify the provisions, opting instead to statutorily recognize many of these issues through the Wireless Ship Act of 1910.

The act did not, however, allocate radio frequencies, and as a result, interference over the airwaves remained a major problem in wireless communications. It also did not mandate the priority of distress calls from sea, nor require that radio operators be licensed, and it failed to address the practical problem of how one radio operator on a ship could monitor radio transmissions at all times.

The flaws in the 1910 law spurred numerous bills in Congress between its enactment and the sinking of the Titanic in April 1912.

Investigations into the Titanic catastrophe revealed a tremendous amount of radio traffic the night of the disaster, including false reports about the safety of passengers, as well as apparent poor timing of the watches of operators on other ships in the area that left radios unattended.

The Radio Act of 1912 addressed these issues by mandating two radio operators per ship, requiring licensing for all radio operators, and assigning specific frequencies for specific purposes. Both the 1910 and 1912 laws, aimed at safety at sea, ultimately laid the foundation for the regulation of radio as a mass medium.