By Marcie K. Cowley
Other articles in Events 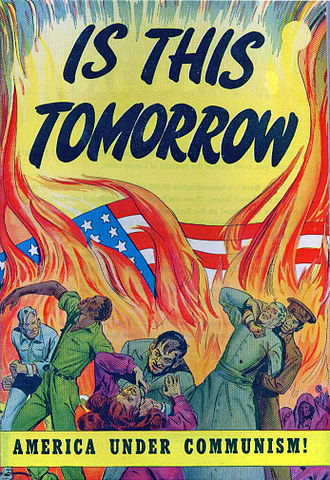 The first anti-Communist alarm, or Red Scare, in the United States occurred between 1917 and 1920, precipitated by the events of World War I and the Bolshevik revolution in Russia. A second Red Scare came with a revival of anti-Communist feeling after World War II that lasted into the 1950s. In both periods First Amendment rights providing for free expression and free association were endangered and put on trial. (Cover of a propaganda comic book from 1947, image via Wikimedia Commons, public domain)

The first anti-Communist alarm, or Red Scare, in the United States occurred between 1917 and 1920, precipitated by the events of World War I and the Bolshevik revolution in Russia. (The term "Red" came from the color of the flag used by Marxist and Communist groups.) Laws such as the Espionage Act of 1917 and the Sedition Act of 1918 criminalized many forms of speech. The Sedition Act was the broadest with its criminalization of any disloyal language, whether printed or spoken, about the government of the United States. A second Red Scare came with a revival of anti-Communist feeling after World War II that lasted into the 1950s. In both periods First Amendment rights providing for free expression and free association were endangered and put on trial.

The executive branch also played a part. Most notably, Attorney General A. Mitchell Palmer, in the so-called Palmer raids, authorized the arrests of several thousand suspected radicals, and many were deported to the Soviet Union. In the 1920s, prosecutions under state syndicalism statutes were upheld in favor of state curtailment of free speech in Gitlow v. New York (1925) and Whitney v. California (1927). Many years later Whitney was overruled by Brandenburg v. Ohio (1969).

The second Red Scare dealt with loyalty to US government

The post–World War II years precipitated a second Red Scare on the federal level, with the late 1940s and early 1950s the heyday. In Congress, the House Un-American Activities Committee (HUAC) was approved as a permanent committee in 1945. (It was abolished in 1975.) Congress also enacted the Subversive Activities Control Act of 1950 (the McCarran Act), which made it a crime to take actions that might contribute to a “totalitarian dictatorship” within the United States, and the Communist Control Act of 1954, which prohibited Communists from holding office in labor organizations.

Sen. Joseph McCarthy, chair of the Senate Committee on Government Operations, brought many people before his committee to question their loyalty to the United States and unsuccessfully investigated the armed services for Communist influences. President Harry S. Truman issued an executive order that provided for a federal loyalty program, and the FBI under J. Edgar Hoover compiled detailed information on suspected communists. In Dennis v. United States (1951), the judiciary sustained the administration’s prosecutions under the earlier Smith Act of 1940, which criminalized teaching or advocating the overthrow of government by force or being a member of an organization that engaged in such activity.

The broad power of the legislature to curtail First Amendment rights subsequently was limited in Yates v. United States (1957) and Scales v. United States (1961). Still, a requirement in the McCarran Act mandating that Communists register with the attorney general was sustained in Communist Party of the United States v. Subversive Activities Control Board (1961). However, in United States v. Robel (1967), a blanket prohibition against Communists working in defense industries was declared to violate the First Amendment right of association. Over time, the perception that those investigating Communism had engaged in excess led to the demise of most of their abuses. Fears eventually diminished as prophecies of imminent Communist takeover proved unfounded.

This article was originally published in 2009. Dr. Marcie Cowley was a professor at Michigan State University.