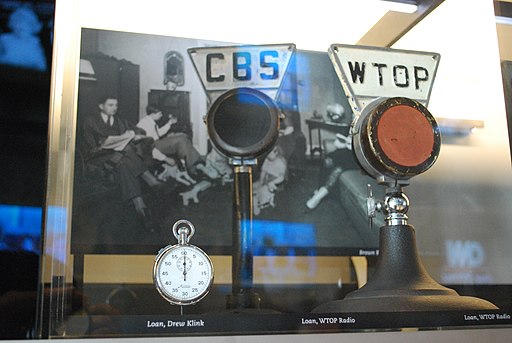 A CBS radio station WTOP in Washington, D.C., refusal to accept an anti-Vietnam War advertisement led to a Supreme Court ruling that the fairness doctrine does not require a broadcaster to accept all political adverstisements. (Photo via Flickr by n0nick showing CBS & WTOP microphones and stopwatch at the National Museum of American History, CC BY-SA 2.0).

The Supreme Court decision in Columbia Broadcasting System v. Democratic National Committee, 412 U.S. 94 (1973), held that a radio station did not violate the fairness doctrine or the First Amendment’s guarantee of a free press by selectively refusing to accept paid advertising on public policy issues.

WTOP, a Washington, D.C., affiliate of the Columbia Broadcasting System, had refused to sell advertising time to Business Executives’ Move for Vietnam Peace, which intended to express opposition to the Vietnam War. In response, the executives filed a complaint with the Federal Communications Commission (FCC), which held responsibility for enforcing the fairness doctrine, claiming that the regulation required broadcasters to air all paid public announcements.

In a separate filing, the Democratic National Committee (DNC) requested a declaratory ruling from the FCC affirming that according to the principles of the fairness doctrine and the First Amendment “a broadcaster may not, as a general principle, refuse to sell time to responsible entities ... for the solicitation of funds and for comment on public issues.”

FCC: Fairness doctrine does not require broadcaster to accept all advertising

The FCC found that the fairness doctrine does not require radio stations to sell time to any and all groups able to purchase airtime. Regarding the DNC request for a ruling, the FCC recognized a statutory, not a constitutional, right of political parties to buy time on the airwaves to solicit funds. The U.S. Court of Appeals for the District of Columbia, however, disagreed with the FCC’s position, holding that the First Amendment included a right to broadcast paid editorial advertisements. The DNC appealed the decision to the Supreme Court, which ruled 7-2 in favor of the FCC policy.

Conceding the necessity for governmental control of the broadcast media, Chief Justice Warren Burger focused on the problem of balancing public regulation with private ownership to ensure that the “public interest” be served.

Congress had rejected the “common carrier” approach, requiring “right of access for all persons wishing to speak out on public issues” in favor of the fairness doctrine. The doctrine “imposes two affirmative responsibilities on the broadcaster: coverage of issues of public importance must be adequate and must fairly reflect differing viewpoints.” In fulfilling these responsibilities, “the right to exercise editorial judgment was granted to the broadcaster.” The central issue is not that all voices are heard, but that every viewpoint is heard, a standard that also applies to the broadcaster’s policy for accepting or rejecting paid editorial advertisements.

Regarding the First Amendment argument that broadcasters must accept all paid editorial advertisements, Burger noted that this required a balancing of the “public interest” with universal access. Congress left this duty to the FCC, which decided that “the undesirable effects” of such a policy are outweighed by “the asserted benefits.”

Justice William O. Douglas concurred with the Court’s decision on the basis that the First Amendment prohibition on abridging the freedom of the press was absolute. Therefore, broadcasters should have the final decision regarding the issues and spokespersons it airs.