By Monica C. Bell (Updated by Encyclopedia staff in September 2019)
Other articles in Issues Related to Speech, Press, Assembly, or Petition 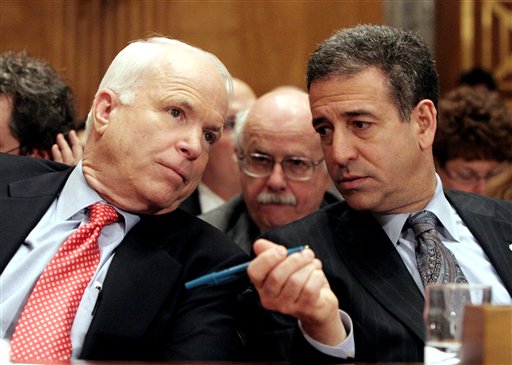 Electioneering involves actively advocating for or opposing a political candidate or party in an election. Electioneering through advertising has sparked numerous constitutional controversies. The most controversial law regulating electioneering was the Bipartisan Campaign Reform Act of 2002 (BCRA), sponsored by Sen. John McCain, left, and Sen. Russ Feingold. (AP Photo/Lauren Victoria Burke, used with permission from the Associated Press)

Electioneering involves actively advocating for or opposing a political candidate or party in an election. It ranges from canvassing to advertising nationally on television. Electioneering through advertising has sparked numerous constitutional controversies.

The most controversial law regulating electioneering was the Bipartisan Campaign Reform Act of 2002 (BCRA). One of its provisions barred corporations and unions from contributing or spending general treasury funds for “electioneering communications,” defined in the act as advertisements that refer to a specific candidate for federal office, are made within 60 days of a general election or 30 days of a primary election, and (for federal candidates other than the president or vice president) are targeted at the electorate.

The BCRA had amended the Federal Election Campaign Act of 1971 (FECA) in an effort to close loopholes. In Buckley v. Valeo (1976), the Supreme Court had interpreted FECA as regulating only “express advocacy” by corporations and unions, defined as the use of words such as "vote for", "elect", or "support" in political communications. Many organizations found it relatively easy to advocate for a candidate without using the "magic words." Thus, the BCRA narrowed the express advocacy standard with its new defnition of electioneering communications.

Court initially upholds most of BCRA against First Amendment challenges

Several interest groups challenged this regulation of political speech, arguing that many of the BCRA’s provisions, including its restrictions on electioneering, violate the First Amendment.

In 2003 in McConnell v. Federal Election Commission, the Supreme Court upheld most provisions of the BCRA, including limits on electioneering. Despite the Court’s decision, advocacy groups continued to challenge the constitutionality of the act as applied to their electioneering efforts.

In 2006 in Wisconsin Right to Life, Inc. v. Federal Election Commission, a three-judge panel of the federal district court in the District of Columbia held that a group’s proposed anti-filibuster advertisements asking listeners to contact specific senators running for reelection did not violate the BCRA because although the ads mentioned particular candidates, they did not endorse or oppose anyone.

The decision was appealed to the Supreme Court, which granted review in Federal Election Commission v. Wisconsin Right to Life, Inc. (2007). The Court ruled that the ad did not constitute express advocacy, and said, Section 203 of the BCRA as applied to the organization's ad was overly broad in banning protected First Amendment speech. The decision thus restored the "express advocacy" v. "issue advocacy" distinction established in Buckley.

Finally, in 2010, in the landmark case Citizens United v. Federal Election Commission, the Court in a 5-4 decision rejected its earlier reasoning that allowed restrictions on express advocacy by corporations, and said that a provision of BCRA that prohibited corporations and unions from using their general treasury funds for express advocacy or electioneering communications was an unconstitutional infringement on political speech – a violation of First Amendment rights.

“We find no basis for the proposition that, in the context of political speech, the Government may impose restrictions on certain disfavored speakers,” wrote Justice Anthony Kennedy, adding that “the First Amendment does not allow political speech restrictions based on a speaker’s corporate identity.”

This article was originally published in 2009. Monica C. Bell is an Associate Professor of Law and Sociology at Yale Law School. Her research focuses on law and inequality, policing and the criminal legal system, welfare and public benefits law, housing law and residential segregation, and race and the law. She also teaches first-year Constitutional Law.