By Ronald Kahn
Other articles in Issues Related to Speech, Press, Assembly, or Petition 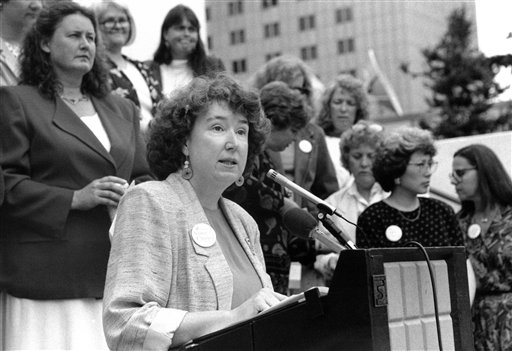 Donna Hurdle, executive director of Planned Parenthood of Alaska, speaks in 1991 at a rally called in downtown Anchorage to protest a court decision in Rust v. Sullivan (1991) that found barring abortion counseling at federally funded clinics to be constitutional. Generally, the Supreme Court has supported restrictions on federally funded activities. (AP Photo/Steven L. Nelson, used with permission from the Associated Press)

In appropriating money, governments sometimes attempt to limit the speech of those that they are funding. The Supreme Court has generally supported such restrictions on government funding, even when those restrictions may stop or have a chilling effect on the free speech rights of government employees, including artists, writers, and scholars.

Prohibiting federal funds for abortion counseling found to be constitutional

Rust v. Sullivan (1991) dealt with government funding of family planning services. The Court ruled, 5-4, that a prohibition on the use of federal funds under the Title X program for abortion counseling by doctors and other health care professionals was constitutional and did not violate the First or the Fifth Amendment. Title X fund recipients alleged that the regulation “impermissibly [imposed] viewpoint-discriminatory conditions on Government subsidies.”

But Chief Justice William H. Rehnquist concluded that the government was making a valid value judgment and simply choosing to fund one program (family planning with no abortion counseling) instead of another. Because doctors and other staff members may use abortion-related speech when such speech is kept separate from Title X–funded activities, the regulation cannot “be held to unconstitutionally condition the receipt of a benefit . . .on the relinquishment of a constitutional right.” In considering the Fifth Amendment concern that the regulation limited women’s right to choose abortion, Rehnquist concluded that women could still obtain abortion counseling through other services.

In National Endowment for the Arts v. Finley (1998), the Court again found that the government had wide latitude in determining how its money would be spent in cases where funding was linked to speech. Finley dealt with a change in the government’s funding procedures for grants provided through the National Endowment for the Arts (NEA). After the NEA funded the display of controversial photographs, Congress amended the 1990 funding bill for the NEA to require it to take into account “general standards of decency and respect for the diverse beliefs and values of the American public” when making grant determinations.

Justice Sandra Day O’Connor wrote the majority opinion, determining that the amendment was facially valid in that it was neither a violation of the First Amendment nor overly vague. O’Connor found that the decency and respect clause did not unconstitutionally interfere with free speech for a variety of reasons:

In United States v. American Library Association (2003), the Court upheld a provision in the Children’s Internet Protection Act of 2000 (CIPA) that required a library to filter out Internet material that may be objectionable for children, if the library used federal funds to purchase computers and Internet access.

Justice Rehnquist, joined by Justices O’Connor, Antonin Scalia, and Clarence Thomas, concluded that filtering software does not inappropriately infringe upon the First Amendment rights of library patrons or induce libraries to act unconstitutionally. The majority ruled that Internet access is not a public forum and that use of filtering software is analogous to librarians selecting books to put on the shelves. The Court did not find an unconstitutional condition on government funding in this case. Citing Rust v. Sullivan, Rehnquist said that Congress was not denying anyone benefits but “simply insisting that public funds be spent for the purpose for which they are authorized.”

In concurrence, Justice Anthony M. Kennedy argued that as long as librarians were willing and able to unblock specific sites at the request of users, the filtering requirement of CIPA was appropriate. In a separate concurrence, Justice Stephen G. Breyer, arguing for the use of a balancing test using “heightened” scrutiny, wrote that patrons would be insufficiently burdened by the filters to outweigh the benefits.

Justices John Paul Stevens, David Souter, and Ruth Bader Ginsburg dissented. Stevens argued that placing filters on all library computers was an overly broad restriction on adult access to protected speech. Less restrictive means to protect children were available. The three dissenting justices saw the law as unconstitutional because it conditions government spending on the restriction of significant fundamental rights. Souter, also in dissent, believed that the law would deny adults access to a substantial amount of material harmful to children, but lawful for adult examination, and a substantial quantity of text and pictures harmful to no one.

Court majorities have recognized some limits to the conditions the government can place on the distribution of funds. In Legal Services Corp. v. Velazquez (2001), the Court dealt with the Legal Services Corporation Act of 1974 (LSCA), which funded free legal assistance to individuals seeking welfare benefits.The LSCA prohibited any organization receiving these funds from pursuing cases that challenge existing welfare law, even if such issues arose after a case was in progress. Justice Kennedy wrote the 5-4 opinion that struck down this funding requirement.

Kennedy distinguished Velazquez from Rust, writing that while Rust dealt with what was essentially government speech disseminated through private actors, Velazquez dealt instead with legal efforts to facilitate private speech itself. By limiting how lawyers may try cases under the funding scheme, the LSCA distorted the legal system, cutting off avenues of judicial oversight and review of congressional legislation. Kennedy thought the laws impermissibly sought “to insulate the Government’s laws from judicial inquiry.” Finally, unlike in Rust, clients likely would have nowhere to turn for further legal counsel since their attorneys would have to drop their cases if challenges to welfare law arose.

Court has to balance Congressional spending with First Amendment rights

These cases fall under the doctrine of unconstitutional conditions (also known as the doctrine of conditional spending). In each of these cases the Court had to balance the government’s interest in ensuring that funds were spent according to the will of Congress with any First Amendment rights that individuals implementing aid programs and aid recipients might have. The absence of an affirmative right for individuals to receive government aid has been central to this doctrine and these cases.

This article was originally published in 2009. Ronald Kahn is a Professor Emeritus in the Department of Politics at Oberlin College.