By Robert A. Kahn (Updated May 2017 by John R. Vile)
Other articles in Issues Related to Speech, Press, Assembly, or Petition 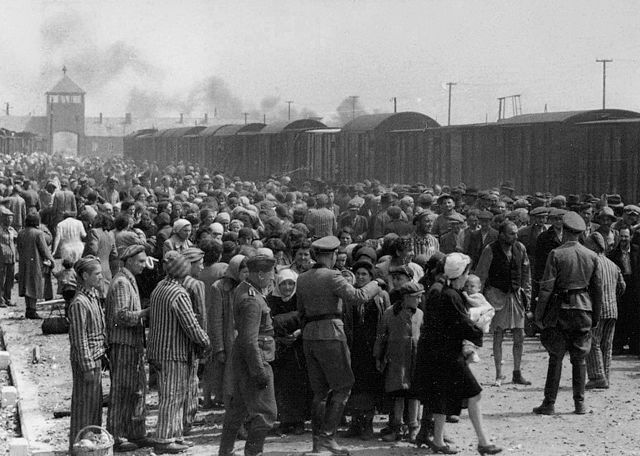 While other countries have created laws making it a crime to deny the Holocaust, the First Amendment's free speech clause has largely protected deniers in the United States. In this photo, a "selection" of Hungarian Jews on the ramp at the death camp Auschwitz-II (Birkenau) in Poland during German occupation in 1944. Jews were sent either to work or to the gas chamber. The photograph is part of the collection known as the Auschwitz Album. (Public domain via Wikimedia Commons)

Holocaust deniers assert that the slaughter of European Jews by the Nazis during World War II never happened. Holocaust denial is strongest in countries with direct experience with the Nazi past (such as Germany, France, and Austria), but deniers are also active in the United States, the United Kingdom, and Canada. Although the earliest examples of denial began immediately after World War II, Holocaust deniers emerged as a cultural phenomenon in the late 1970s. The official response of the United States to Holocaust denial has been significantly different from that in other countries, primarily because the U.S. Constitution’s First Amendment provides for freedom of expression.

Europe has responded to Holocaust deniers with legal prosecution

Canadian trial became a debate over the Holocaust

In 1985 the Ontario government in Canada prosecuted Ernst Zundel for distributing a pamphlet entitled Did Six Million Really Die? — a case that proved difficult for prosecutors. Zundel was tried under a law banning the knowing distribution of false news. Because the adversarial legal system derived from the British common law lets the defense make its own case, Zundel was able to present several witnesses who explained to the jury why his belief that the Holocaust never happened was sincere. The trial thus became a debate over the Holocaust itself. Although a jury twice found Zundel guilty, some media headlines conveyed the idea that the Holocaust was in doubt. Finally, in 1992 the Canadian Supreme Court held that the false news law was unconstitutional.

The United States has had no Holocaust denial prosecutions

There have been no prosecutions of Holocaust deniers in the United States, although Mel Mermelstein, a southern California businessman who was a Holocaust survivor, in 1980 sued the Institute for Historical Review for breach of contract, after the institute offered $50,000 for proof that any Jews were gassed at Auschwitz. He provided documents, but the institute had refused to pay him. After a state judge took judicial notice of the Holocaust as a fact beyond reasonable dispute, the case settled out of court in Mermelstein’s favor.

The main controversy posed by Holocaust denial in the United States arose in the early 1990s, when Holocaust deniers sent ads denying the Holocaust to college newspapers. Although most papers rejected the ads, a large minority ran them — including papers at the University of Michigan, Ohio State University, and Brandeis University. The students who ran the ads argued that the free expression clauses of the First Amendment compelled them to do so. Holocaust scholar Deborah Lipstadt accused the college newspapers of ignorance about both the Holocaust and the First Amendment. (The student newspapers at private universities had no obligation to run the ads, and the papers at state universities had to run them only if the school administration had direct oversight of the papers.)

Many of the papers that ran the ads also ran editorials explaining the importance of the Holocaust and decrying the deniers. These editorials also explained why the editors believed the First Amendment required them to run the ads. If the students were legally mistaken, they were moved by First Amendment values.

Northwestern University continued to employ electrical engineering professor Arthur Butz after he continued to deny the Holocaust, but he was careful not to espouse such views in the classroom. In similar circumstances, Florida Atlantic University eventually expelled James Tracy, a Professor of Communications, after he denied that a mass shooting had taken place at a Newtown, Connecticut elementary school in December 2012. However, it largely did so on the basis that he had missed a deadline that the university had issued to him in which he was supposed to indicate how he had distanced his views from the university.

Robert O’Neil has observed that private universities are not governmental actors and that some universities may give greater leeway for individuals to deny facts outside their own academic disciplines than within it (2017). He notes that President Trump tapped Myron Ebell to head the transition team for the Environmental Protection Agency (EPA) even though he was well known as a climate change denier, despite a consensus of scientific evidence to the contrary.