By John O. Omachonu and David Schultz
Other articles in Issues Related to Speech, Press, Assembly, or Petition, Media, Freedom of the Press issues and topics 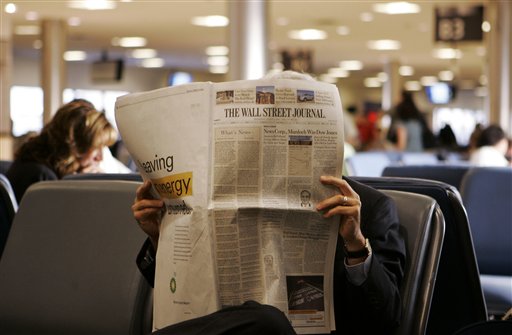 Media concentration is the ownership of the mass media by fewer individuals. Critics of this trend contend that media concentration threatens the marketplace of ideas and poses a threat to First Amendment freedoms. An example of media concentration is the acquisition of the Wall Street Journal for $5 billion by the media empire, News Corp, owned by Rupert Murdoch. In this photo, a commuter reads The Wall Street Journal while waiting for his flight in 2007 at Hartsfield-Jackson Atlanta International Airport in Atlanta. (AP Photo/Kiichiro Sato, used with permission from the Associated Press)

Media concentration is the ownership of the mass media by fewer individuals. Critics of this trend contend that media concentration threatens the marketplace of ideas and poses a threat to First Amendment freedoms.

When the Declaration of Independence (1776), the Constitution (1787), and the Bill of Rights (1789) were written, the mass media did not exist. The press referenced in the First Amendment consisted of pamphleteers and locally-owned newspapers.

After World War II and particularly through the 1960s and 1970s, local newspapers began to close or merge as readership declined and audiences gravitated to television news; as a result, ownership of newspapers consolidated.

A study by media analyst Ben Bagdikian has charted this consolidation over a 30-year period. Bagdikian’s 2004 analysis indicates that Americans are served by 1,468 daily newspapers, 6,000 assorted magazines, 10,000 radio stations, 2,700 television and cable stations, and 2,600 book publishers that are under the aegis of five major multinational corporations (16).

First Amendment expert C. Edwin Baker (2005) wrote, “The key goal, the key value, served by ownership dispersal is that it directly embodies a fairer, more democratic allocation of communicative power” (p.735). Bagdikian also maintains that the increasing concentration of control of information is a major threat to a nation’s desire to give its citizens a “broad choice” of media.

Critics of centralization argue also that it facilitates censorship. Some point to Internet censorship in China as one example, noting in particular how Google has cooperated with the government there to block access to some Web sites. Others worry that as the media become increasingly corporate and for-profit, other forms of self-censorship, such as covering only the news that brings in large audiences, will follow.

New forms of communication via the Internet could allow more diversity

The ubiquity of the Internet, blogs, and other new media has opened up many new forms of communication, which are credited with providing news that the mainstream media do not cover. In addition, new media and patterns of ownership make it profitable to provide a diversity of communication forums, thereby protecting the ability of many voices to speak.

The U.S. government has sought to regulate media ownership through antitrust laws. Legislators have also enacted laws to permit joint operating agreements of newspapers to prevent communities from being served by only one daily paper.

The Telecommunications Act of 1996 and rules issued by the Federal Communications Commission do permit media concentration, but Congress continues to scrutinize the FCC rules in an attempt to minimize the threat to the marketplace of ideas.

In 2017, the FCC relaxed limits on TV station ownership and reversed a rule that prevented a single company from owning a newspaper and television and radio stations in the same town.  The FCC chairman, Ajit Pai, argued that media organizations would have greater ability to compete against internet giants by combining resources in local markets.

This article was originally published in 2009. John Omachonu, Ph.D., is an educator, broadcast media practitioner, and teacher, who for more than two decades, taught college-level courses in mass media law and ethics. David Schultz is a professor in the Hamline University Departments of Political Science and Legal Studies, and a visiting professor of law at the University of Minnesota.