By David Schultz
Other articles in Issues Related to Speech, Press, Assembly, or Petition, Media, Freedom of the Press issues and topics 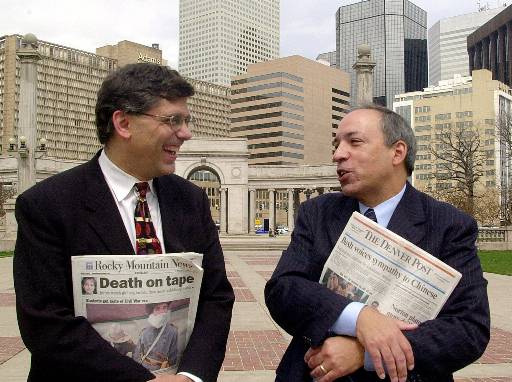 The U.S. news media are sometimes treated differently in the application of antitrust laws in order to promote a diverse marketplace of ideas under the First Amendment. One example of a law that exempted news media from antitrust rules was the Newspaper Preservation Act of 1970, allowing competing newspapers to enter into joint operating agreements. Here, John Temple, left, editor and president of the Rocky Mountain News and Glenn Guzzo, right, editor of The Denver Post, talk during a photo session in Denver, 2001, after an announcement of a JOA between the papers. (AP Photo/Ed Andrieski, used with permission from the Associated Press)

The U.S. news media are sometimes treated differently in the application of antitrust laws in order to promote a diverse marketplace of ideas under the First Amendment.

Thus in some situations the media receive specific legal exemptions from the normal application of antitrust laws to the ownership of news services such as television, radio, and newspapers.

Congress has attempted to discourage concentration of business ownership in US

Over the years, Congress has adopted legislation to discourage the concentration of business ownership in the United States. In 1890 that body passed the Sherman Antitrust Act, which made it illegal to monopolize or engage in practices that restrain trade. The Clayton Antitrust Act, adopted by Congress in 1914, made it illegal to engage in price fixing or discrimination, to bring about mergers of businesses or corporations that reduce competition, or to allow directors of one corporation to sit on the board of another.

These acts were intended to ensure that economic competition would prevent any business from using its economic power illegally to manipulate prices for its products or to prevent new competitors from entering the marketplace. Although a significant debate surrounds the wisdom, policy, and economics of the Sherman and Clayton acts, their application to the media has raised some particularly unique issues because of the media’s important function in a democratic society — providing citizens with the information they need to make informed decisions, as well as serving as a check on public officials.

Concentration of media ownership may reduce diversity of opinion

Since the days of the Revolutionary War, each community has often had more than one locally owned newspaper. During his travels around the United States, French political thinker Alexis de Tocqueville, whose now-famous Democracy in America was published in 1835 and 1840, noted that the diversity of opinion and democratic spirit of the United States rested in part on the many newspapers dotting the country. Thus a diversity of ownership is often considered a proxy for a diversity of opinion and, in turn, a vibrant marketplace of ideas.

According to First Amendment scholars such as C. Edwin Baker, should the ownership of the news services fall into the hands of a very small number of persons, freedom of speech and press might well be threatened. Thus, when the media become a big business, the issue is how to apply antitrust laws to promote both economic competition and a diversity of opinion in American society.

The Supreme Court first wrestled with the application of the antitrust laws to the media in Associated Press v. United States (1945) and Turner Broadcasting System, Inc. v. Federal Communications Commission (1994). In Associated Press, the Court upheld the application of the Sherman Act to a limit imposed by the Associated Press (AP) on new members joining its service and a prohibition on its members selling AP news to nonmembers. The majority, and Justice Felix Frankfurter in his concurrence, argued that the limits imposed by the AP on access to ideas endangered the marketplace of ideas.

However, in his dissent, Justice Owen J. Roberts expressed his fear that the application of antitrust laws to the media constituted an unjustified intervention of the government into the dissemination of ideas that could threaten freedom of the press.

At issue in Turner Broadcasting was the constitutionality of a provision of the 1992 Cable Act that contained a “must-carry” requirement.

Under this provision, cable operators with more than 300 subscribers and 12 channels had to set aside up to one-third of their channels for local commercial broadcast stations. In affirming the must-carry provisions, the Supreme Court ruled that these provisions furthered important government interests in promoting a diversity of opinions and ideas. Conversely, like the dissenters in Associated Press, the minority in Turner Broadcasting worried about the effects that government intervention into the media would have on the free flow of ideas. Both the Associated Press and Turner Broadcasting cases, then, raise important questions about what impact government regulation — more specifically, antitrust laws — can have on the media and the First Amendment.

To address issues of media concentration, Congress has adopted specific laws that often exempt or apply special rules to the news media industry. For example, media mergers are usually examined under section 7 of the Clayton Act, as amended in 1950 by the Celler-Kefauver Act.

This act prevents the stock purchase or acquisition of one business by another, even if they are not competitors. It would apply when, for example, a company that owns a newspaper in a community seeks to buy a local television channel. This application was made more specific to the media in 1975 when the Federal Communications Commission (FCC) issued its cross-ownership ban that precluded the joint ownership of newspapers and broadcast television stations in the same geographic markets and ordered the divestiture of certain “egregious” combinations already in existence. These rules were adopted to promote diversity of ownership of the media and presumably diversity of ideas. The Supreme Court upheld these rules in Federal Communications Commission v. National Citizens Committee for Broadcasting (1978).

Although government regulation of the news media industry is one tactic for promoting the marketplace of ideas, advocates of deregulation believe it also might increase competition.

A specific exemption to the antitrust rules for the media is the Newspaper Preservation Act of 1970. This act allows two or more newspapers to form a joint operating agreement (JOA) under circumstances of economic distress at all but one of the papers. Recognizing that it is often difficult for more than one newspaper to operate in a community because of declining readership and competition for advertising revenue with television and radio, the Newspaper Preservation Act makes it possible for two papers to merge some operations. However, in permitting the JOA the government is still required to examine the impact the merger would have on editorial content and diversity of opinions.

In addition, through the Telecommunications Act of 1996 Congress directed the FCC to reconsider its rule on cross-ownership. The FCC complied, and in 2002 it issued new rules that would have allowed more cross-ownership within specific markets and across the country. However, many members of Congress and citizens, already alarmed by the rise of large media corporations and mergers such as Clear Channel Communications and Time Warner, opposed the loosening of the rules. Eventually, a federal court voided the rules on technical grounds.

The problem of media ownership and antitrust laws remains vexing. Media analysts Dean Alger and Ben Bagdikian, among others, have noted how since the 1990s the number of independent news outlets has fallen as media corporations have continued to merge. They believe the application of antitrust laws is critical to preserving a marketplace of ideas.

Others, however, reach the opposite conclusion; granting the media exemptions to antitrust laws will preserve the economic health of news services. This economic health, they contend, is the best way to ensure a competitive marketplace of ideas. How the antitrust rules now apply to the new media, including the Internet, raises even more questions about the application of these rules to the news industry.

In 2017, the FCC relaxed limits on TV station ownership and reversed a rule that prevented a single company from owning a newspaper and television and radio stations in the same town.  The FCC chairman, Ajit Pai, argued that media organizations would have greater ability to compete against internet giants by combining resources in local markets.