By Elizabeth Beaumont
Other articles in Issues Related to Speech, Press, Assembly, or Petition 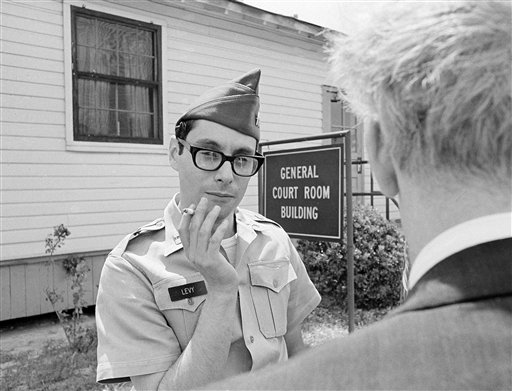 When the U.S. military is a party to cases centering on First Amendment rights to free speech, free press, and free exercise of religion, the Supreme Court generally defers to the government’s interest and discretion, permitting the military to restrict the rights of service personnel in ways it does not permit in civilian contexts. The U.S. military has always operated as a somewhat distinct society governed by its own criminal code. It is currently ruled by a special system of laws, primarily the Uniform Code of Military Justice (UCMJ),and has its own system for prosecuting violations of the code, including courts-martial. In this photo, Capt. Howard Levy of Brooklyn, N.Y., puffs on a cigarette outside the courtroom in Columbia, S.C., May 15, 1967, where his court martial resumed. Levy is ontrial for disobeying orders to train Green Beret medical aidmen. (AP Photo/Dave Martin, used with permission from the Associated Press)

When the U.S. military is a party to cases centering on First Amendment rights to free speech, free press, and free exercise of religion, the Supreme Court generally defers to the government’s interest and discretion, permitting the military to restrict the rights of service personnel in ways it does not permit in civilian contexts.

The U.S. military has always operated as a somewhat distinct society governed by its own criminal code. It is currently ruled by a special system of laws, primarily the Uniform Code of Military Justice (UCMJ),and has its own system for prosecuting violations of the code, including courts-martial. When responding to First Amendment challenges from military personnel, the Court consistently treats the military as a special and separate context or environment in which standard First Amendment protections do not apply, or do not apply to the same extent (other major categories of special contexts are schoolchildren, incarcerated prisoners, and public employees).

Warren said that while military members do not give up constitutional rights, the Court was traditionally "hands off"

Chief Justice Earl Warren once suggested that military personnel do not give up their constitutional rights—“our citizens in uniform may not be stripped of basic rights simply because they have doffed their civilian clothes” (Warren 1962:187)—but he did note that under the doctrine of military necessity, also known as the “Orloff Rule” from Orloff v. Willoughby (1953), the military can implement its regulations largely outside the purview of judicial review, because the Court’s attitude had historically been “hands off.”

He observed:“[I]t is indisputable that the tradition of our country, from the time of the revolution until now, has supported the military establishment’s broad power to deal with its own personnel. The most obvious reason is that Courts are ill-equipped to determine the impact upon discipline that any particular intrusion upon military authority might have” (Warren 1962:186–187).

In most cases involving the military, the Supreme Court seems to use lower levels of review or operates from the strong presumption that “military necessity” or the military interests in governing its unique, “separate society” tend to override or outweigh the speech and religious rights individuals ordinarily hold.

Indicative of the military’s special status, the Uniform Code of Military Justice prohibits military personnel from using “contemptuous speech” against the President and other leaders, from engaging in “conduct prejudicial to good order and discipline in the Armed Forces,” and from “conduct unbecoming an officer and a gentleman.” These regulations have been used to restrict political expression as well as other activities. Also under the code, military personnel can be severely punished—including dismissal, forfeiture of pay, and imprisonment—for participating in rallies that criticize war efforts, even if they are off duty and dressed as civilians, an issue addressed in United States v. Howe (1967).

During the Vietnam War era, several military speech restrictions were unsuccessfully challenged for overbreadth under the First Amendment in Parker v. Levy (1974) by an officer who was convicted by court-martial of criticizing the military and arguing that soldiers should refuse to serve in Vietnam. In Greer v. Spock (1976) and Brown v. Glines (1980), the Court upheld other military regulations that restricted or prohibited service personnel or civilians from distributing political materials on a military base.

The military also maintains restrictions on sexual expression and conduct. For example, since World War I U.S. military laws and regulations have prohibited homosexual conduct in the ranks; the UCMJ includes an anti-sodomy regulation. The “Don’t Ask, Don’t Tell” law passed by Congress in 1993, which replaced the Department of Defense’s former policy of discharging all homosexuals, was intended to permit gays to serve in the military so long as they did not reveal their sexual identities.

Several free speech challenges were launched against the policy in the 1990s, but district courts have upheld the law’s constitutionality, generally finding that the government’s interest in preventing homosexual conduct permits these restrictions—Holmes v. California Army National Guard (1997) is one example of such a case. Military personnel seeking to overturn judgments in their dismissals have met with relatively little success—examples are Thomasson v. Perry (1996), Philips v. Perry (1997), and Able v. United States (1998). Some observers believe the Don’t Ask, Don’t Tell policy will eventually be subject to an equal protection challenge like that for civilian sodomy laws in Lawrence v. Texas (2003).

One of the few areas related to the military in which the Court has, over time, shown its willingness to protect freedom of conscience is in the treatment of conscientious objectors. In Berman v. United States (1946), the Court initially rejected attempts to include political and moral grounds other than religion as a basis for conscientious objection, but later recognized personal faith and nontraditional religious variants of pacifism in United States v. Seeger (1965), and, finally, any deeply held or fervent belief, even if nonreligious in character, in Welsh v. United States (1970).

However, once a serviceman or woman has entered the military, the Court provides much less protection of free speech or free conscience than is accorded citizens in other contexts. For example, the military’s interest in maintaining a cohesive, homogeneous community outweighs an individual’s right to wear clothing that represents one’s religious observance. Thus in Goldman v. Weinberger (1986) the Court held that the air force could prohibit an Orthodox Jew from wearing a yarmulke in order to maintain uniformity in its dress code. Rather than evaluating the military’s claim that uniform appearance is essential to its functioning, the Court defers to the military’s judgment that this is in fact true.

This article was originally published in 2009. Elizabeth Beaumont is an Associate Professor and the Director of Legal Studies at the University of California, Santa Cruz.