By Hana M. Ryman and J. Mark Alcorn
Other articles in Issues Related to Speech, Press, Assembly, or Petition 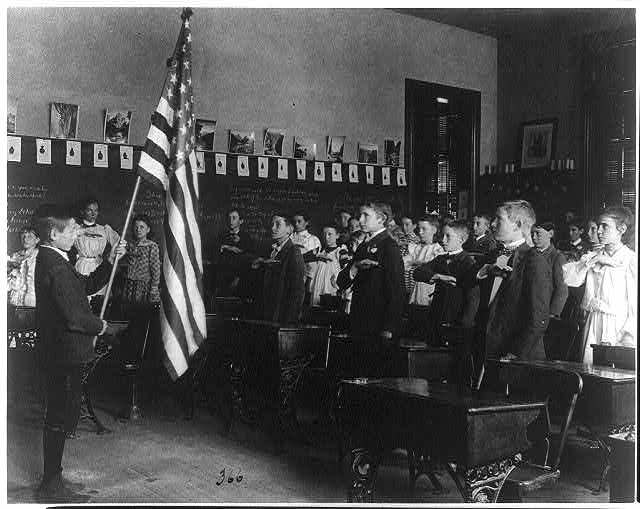 America’s most common form of paying respect to a national emblem or symbol, the flag salute with the Pledge of Allegiance, started as part of a nationwide public school observance in 1892 honoring the four-hundredth anniversary of Columbus’s discovery of America. Immediately it became popular and was widely used in schools in every state. By 1935, twenty-four states had statutes requiring instruction in flag respect; nine specifically required that the flag salute ceremony be conducted regularly in all public schools. The Supreme Court has ruled that compelling schoolchildren to recite the Pledge of Allegiance violates the First Amendment. The Court has not struck "under God" from the pledge.(Schoolchildren pledge allegiance to the flag, circa 1899, via Library of Congress, public domain)

America’s most common form of paying respect to a national emblem or symbol, the flag salute with the Pledge of Allegiance, started as part of a nationwide public school observance in 1892 honoring the four-hundredth anniversary of Columbus’s discovery of America. Immediately it became popular and was widely used in schools in every state. By 1935, twenty-four states had statutes requiring instruction in flag respect; nine specifically required that the flag salute ceremony be conducted regularly in all public schools. None explicitly demanded pupils participate in the ceremony as it was, at the time, almost inconceivable that anyone might refuse.

As early as 1918, the Mennonites, among others, refused the salute and pledge because they thought it implied a promise to bear arms, and for the most part, school officials chose to grant exemptions. This indulgence continued until the Jehovah’s Witnesses objected in the 1930s and 1940s.

The Witnesses were decidedly unpopular in the 1930s and 1940s because of their methods of aggressive proselytizing and their repeated and severe condemnations of other religions. Their status as conscientious objectors also contributed to their unpopularity during World War II. In the mid-1930s, a Witnesses leader endorsed nonsaluting and sparked a wave of refusals just as the flag salute became an issue again with war raging in Europe. School officials reacted with disciplinary action. Pennsylvania and Massachusetts alone expelled over two hundred Jehovah’s Witness children from school. In most instances these children still faced compulsory education laws, meaning they had to enroll in private schools or be liable to prosecution.

The Witnesses brought suits in six states to compel readmission of their children and lost each time. On four occasions in the 1930s the Supreme Court refused petitions for certiorari from these rulings. Finally, in April 1940, the Court heard a Jehovah’s Witness readmission case.

Walter Gobitas (his name was misspelled Gobitis, which became the official spelling in the Supreme Court case) had brought suit before a federal district judge in Philadelphia for an injunction compelling the readmission of his two expelled children to the Minersville, Pennsylvania, public schools. The district court held that the compulsory flag salute violated the religious freedom clause when enforced against the Jehovah’s Witnesses, and the circuit court of appeals affirmed this decision. The school board appealed to the Supreme Court which, to the surprise of many, reversed the lower courts.

The Court, in Minersville School District v. Gobitis (1940)—with Justice Felix Frankfurter writing for an 8-1 Court with Justice Harlan Fiske Stone dissenting—held that a child could constitutionally be expelled from public school for refusing to participate in the daily flag salute ceremony even though participation violates the child’s religious beliefs. Stone’s dissent stressed that the majority was upholding a law that coerced children to express a sentiment in violation of their deepest religious convictions.

Within two years Gobitis was under fire from all sides. The decision had ushered in a period of violence perpetrated against Jehovah’s Witnesses. In one week the Department of Justice received reports of hundreds of physical assaults on Jehovah’s Witnesses by citizens and public officials. Also as a result of the ruling, school districts in 31 states made the pledge compulsory and expelled over two thousand Witness children who refused to comply. Further complicating the situation was congressional passage of a joint resolution codifying the rules of flag etiquette. As the violence grew, so did unfavorable reaction to Gobitis.

Walter Barnette’s children, and others, had been expelled from school for insubordination. Barnette could not afford private schooling and faced potential fines or imprisonment for failing to adhere to compulsory education laws. The Jehovah’s Witnesses filed a class-action lawsuit in Charleston, West Virginia, in August 1942, and the case was heard by a three-judge panel, which decided unanimously in favor of the children, who were readmitted to school promptly.

The case, West Virginia State Board of Education v. Barnette (1943), reached the Supreme Court in March 1943, and the decision was announced on June 14 (Flag Day), 1943, upholding the lower court’s ruling by a 6-3 vote. Justice Robert H. Jackson wrote one of the more eloquent opinions in Court history deciding the case on free speech grounds rather than freedom of religion. The Court held that the government could not compel citizens to express beliefs without violating freedom of speech, and regardless of whether the objections to saluting the flag were religiously based or not, this freedom had to be respected. In language that has become First Amendment lore, Jackson wrote: “If there is any fixed star in our constitutional constellation, it is that no official, high or petty, can prescribe what shall be orthodoxy in politics, nationalism, religion, or other matters of opinion or force citizens to confess by word or act their faith therein.”

Court has upheld the words "under God" in the pledge

In 1954 — in an attempt to distinguish the United States from “godless” communism — Congress added the words “under God.” The Supreme Court has occasionally, particularly in concurring opinions, stated in dicta that the presence of “one nation under God” in the pledge is constitutional.

After September 11, 2001, a surge of patriotism swept the country; several states passed laws requiring the recitation of the pledge with, in some cases, a caveat that students did not have to stand if they did not wish.

The only challenge to the pledge that has reached the Supreme Court in the twenty first century is Elk Grove Unified School District v. Newdow (2004), in which Michael Newdow challenged the school district’s policy of teachers’ leading students in a voluntary recitation of the Pledge of Allegiance, including the words “under God.”

The Supreme Court, in an opinion authored by Justice John Paul Stevens, found that Newdow did not have standing to bring suit because he did not have sufficient custody over his daughter. Thus, the Court did not consider the constitutional question, and “under God” is still in the pledge that primary and secondary teachers are required to lead in some states.