By Roy B. Flemming (Updated August 2017 by David L. Hudson Jr.)
Other articles in Issues Related to Speech, Press, Assembly, or Petition 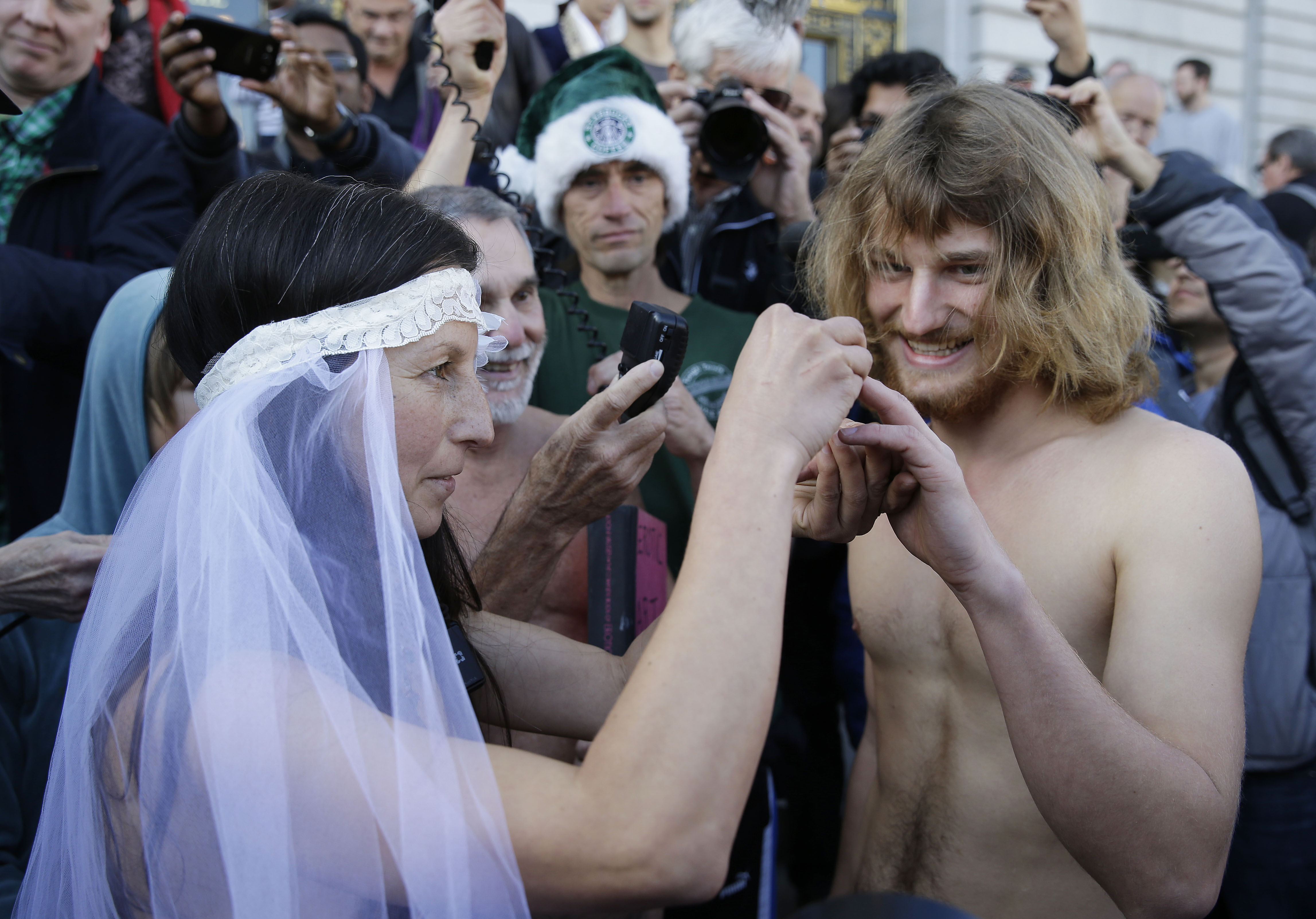 Gypsy Taub, left, places a ring on the finger of Jaymz Smith, right, during their nude wedding outside City Hall, Thursday, Dec. 19, 2013, in San Francisco. Taub, the face of San Francisco's nude rights movement, tied the knot outside City Hall and was later cited and released by police. Taub, a mother of three who conducts nude interviews on public access TV, has been arrested repeatedly for violating the city's public nudity ban. In 2017, the Ninth U.S. Circuit Court of Appeals upheld the city's ordinance in Taub v. City and County of San Francisco. (AP Photo/Eric Risberg, used with permission from The Associated Press)

Public nudity is typically banned as a matter of regulating morals. Almost every state has laws dealing with lewd behavior or indecent exposure. Enforcement of these laws, however, depends in part on context or situation (for example, artistic expression or commercial enterprise) and whether the activities are sexualized (for example, nude sunbathing or swimming as opposed to simulated or actual copulation among nude individuals).

Issues involving nonsexualized nudity can be analyzed in terms of giving “offense” rather than leading to “harm” as pornography is most generally treated. Only recently has the Supreme Court considered public nudity in terms of First Amendment freedom of expression.

The Court first directly addressed the issue in Barnes v. Glen Theatre,Inc. (1991), which asked whether state prohibitions of nudity in public places infringed on protected forms of expressive freedom. The Glen Theatre presented totally nude dancing that was not obscene under the Miller test from Miller v. California (1973). State law in Indiana, where the theater was located, banned nudity in public places and compelled nude dancers to wear pasties and g-strings. The Seventh U.S. Circuit Court of Appeals declared non-obscene nude entertainment was an expressive activity, protected by the First Amendment,and struck down Indiana’s law.

The Supreme Court’s 5-4 ruling reversed the lower court and upheld Indiana’s statute, but the majority fragmented into three separate opinions. A three-justice plurality, led by Chief Justice William H. Rehnquist, agreed that nude dancing as performed at the Glen Theatre was expressive conduct protected by the First Amendment but “only marginally so.” The plurality then applied the standard enunciated in United States v. O’Brien (1968), which had wrestled with communicative conduct or symbolic speech (in that instance, the burning of a draft card). Applying this test, the plurality concluded Indiana’s statute passed constitutional muster “despite its incidental limitations on some expressive activity” because as general law it did not target nude dancing per se and because of Indiana’s interest in “protecting societal order and morality.”

Justice Antonin Scalia in his concurrence disagreed that Indiana’s law implicated the First Amendment. He favorably quoted the court of appeals dissent that the statute did not regulate dancing but public nudity, noting that “Almost the entire domain of Indiana’s statute is unrelated to expression, unless we view nude beaches and topless hot dog vendors as speech.” Scalia therefore disagreed that more than normal scrutiny of the law was required and thus application of the O’Brien test was inappropriate. Justice David H. Souter’s concurrence relied on the secondary effects rationale—that city officials could regulate nude dancing because of the harmful secondary effects it might cause, such as decreased property values or increased crime.

The inability of five justices to agree on why Indiana’s law was constitutional was met with confusion. The Supreme Court tried a second time in City of Erie v. Pap’s A.M. (2000). A 6-3 majority sustained the Barnes judgment and upheld Erie’s anti-nudity ordinance, which was nearly identical to Indiana’s, against the desires of Kandyland, a nude dancing establishment run by Pap’s A.M., to engage in totally nude dancing. The plurality opinion relied primarily on the secondary effects rationale, however, rather than the state’s interest in regulating morality.

This article first published in 2009 and has been updated. The primary contributor was Roy B. Flemming, a Professor Emeritus in the Department of Political Science at Texas A&M University. It has been updated by the First Amendment Encyclopedia.