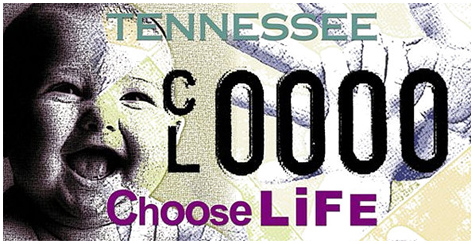 In the 1920s, states began placing messages and symbols, from state seals and mottos to animals and fish, on vehicle license plates.

Does the government’s attempt to force vehicle owners to display a message on license plates violate the owners’ First Amendment rights? Plaintiffs challenging specialty plates have argued that it does because a vehicle is private property.

Drivers are allowed to cover slogans on plates if they choose, Supreme Court said

In Wooley v. Maynard (1977), the Supreme Court agreed with this argument. The Court ruled that because New Hampshire’s “Live Free or Die” slogan was ideological rather than neutral, the state had to permit drivers to cover the message if they chose.

Recently, the courts have turned their attention to whether specialty license plates, which drivers can order to express their own points of view, contribute to viewpoint discrimination and whether the distribution of funds generated by a state specialty license plate program to specific religious or ideological groups violates civil rights protections.

The Sixth U.S. Circuit Court of Appeals accepted this argument when it rejected a challenge to Tennessee’s “Choose Life” license plates in American Civil Liberties Union of Tennessee v. Bredesen (6th Cir. 2006). “It is Tennessee’s own message,” the appeals court wrote.

He also reasoned that the public often associates specialty license plates with the States, as license plates are a form of government identification.  Breyer identified a third factor – that  “Texas maintains direct control over the messages conveyed on its specialty plates.”

The Court was sharply divided 5-4 in the case and Justice Samuel Alito authored a powerful dissent, warning that the majority’s “capacious” application of the government speech doctrine could threaten free speech.

The courts have gone back and forth on cases related to the “Choose Life” plate.

Like other states offering plates with an anti-abortion message, Louisiana did not provide plates with a pro-abortion viewpoint. Moreover, the state distributed funds raised from the sale of the “Choose Life” plates to anti-abortion Christian groups.

The Center for Reproductive Law and Policy (CRPL) challenged the one-sided message as a violation of the establishment clause of the First Amendment and won a federal injunction against production of the plates in 2000.

In 2003 a district court in Louisiana ruled that it was unconstitutional for the state to offer specialty license plates carrying the viewpoints of only those organizations approved by the legislature. But in Henderson v. Stalder (5th Cir. 2005), the Fifth U.S. Circuit Court of Appeals vacated the lower court’s decision, stating that it did not have jurisdiction in the matter because of Louisiana’s Tax Injunction Act.