By John R. Vile (Updated by Deborah Fisher in May 2019)
Other articles in Issues Related to Speech, Press, Assembly, or Petition 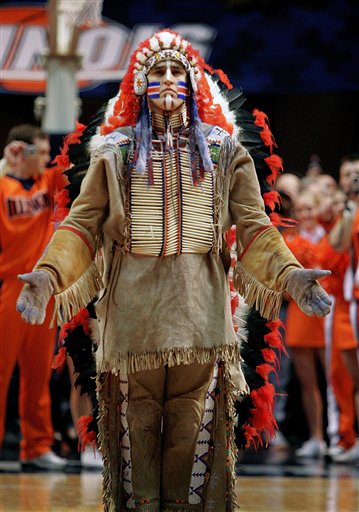 Sports mascots that may be offensive to Native Americans are generally protected by the First Amendment. But controversy has led the NCAA to discourage their use through sanctions, and some school teams have voluntarily changed names. Here, University of Illinois mascot Chief Illiniwek performs for the last time Feb. 21, 2007 during Illinois' basketball game against Michigan. Removing the chief frees the university of NCAA sanctions after the organization deemed Illiniwek — portrayed by buckskin-clad students who dance at home football and basketball games and other athletic events — an offensive use of American Indian imagery and barred the school from hosting postseason athletic events. (AP Photo/Seth Perlman, used with permission from The Associated Press.)

Sports logos and mascots using terms or images that may be offensive to Native Americans, African Americans, or other racial and ethnic groups are generally protected by the First Amendment.

Many schools and their sports teams — as well as some professional teams — have adopted Native American terms or images. In recent years, some Native Americans began to view these designations as derogatory, demanding that the references to them be eliminated.

Some school teams have dropped Native American mascots or logos

In the period from 1970 until about 2000, some 600 of 2,500 institutions using such designations made changes (Blankenship 2001: 455). Other schools continue to use designations, such as “The Rebels” (sometimes accompanied by Confederate flags), that may cause discomfort among African Americans or others.

The free speech clause of the First Amendment appears to support the right of teams to choose any designations, short of “fighting words,” they want.

But the amendment does not shield teams from the adverse publicity that such names might generate, nor does it necessarily prevent groups such as the National Collegiate Athletic Association (NCAA) from enforcing nongovernmental sanctions.

In 2005 the National Collegiate Athletic Association ruled that teams at 18 colleges and universities using Native American mascots would be ineligible to participate in NCAA postseason events.

It later reversed its judgments for the Central Michigan University Chippewas, Florida State University Seminoles, Mississippi College Chocktaws, and University of Utah Utes, because they had received support from the tribes after whom they were named. Five other schools became eligible for postseason play after they changed their teams’ names.

Officials at the University of Illinois at Urbana-Champaign won an appeal to the NCAA to keep using the names “Illini” and “Fighting Illini,” but in 2007 it dropped the use of its Chief Illiniwek mascot, whose “dance” was apparently not authentic to the tribe being depicted.

In an earlier case involving the university, Crue v. Aiken (7th Cir. 2004), the Seventh Circuit Court of Appeals had upheld a decision holding as impermissible the university chancellor’s attempt to avoid NCAA sanctions by forbidding faculty members unhappy about what they viewed as the university’s use of racially demeaning stereotypes of Native Americans from communicating with prospective student athletes on the matter. The court found the chancellor’s actions to be an overly broad, content-based prior restraint.

At the professional sports level, efforts to stop the use of the Washington Redskins mascot name by invalidating its trademark registration have been unsuccessful.

In 1992 a Cheyenne, Susan Harjo, filed a complaint with the federal Trademark Trial and Appeal Board that sought to withdraw the trademark of the Washington Redskins as a violation of Section 2(a) of the Lanham Act, the U.S. trademark law. The complaint suggested that the board could refuse to register trademarks that consisted of “scandalous matter” or that brought national symbols “in contempt, or disrepute.”

Despite Harjo’s initial success before the board, the District of Columbia Circuit Court of Appeals ruled in Pro Football, Inc. v. Harjo (D.C. Cir. 2005) that lower courts should consider whether Harjo’s initial claim was barred by the equitable doctrine of laches — that is, because of the delay in bringing up the matter, Harjo was no longer entitled to her claim.

Then, in 2014, ruling on another complaint, the United States Patent and Trademark Office’s (USPTO) Trademark Trial and Appeal Board canceled the Redskins trademark registration after finding that the petitioners showed it was disparaging of Native Americans, which federal law prohibited.

During the Redskins case appeal, another case involving a disparaging trademark name of a music band, The Slants, had made it to the Supreme Court. In that case, Matal v. Tam, the Supreme Court overturned the federal law that prohibited registration of disparaging trademark names, ruling the law was unconstitutional because “speech may not be banned on the grounds that it expresses ideas that offend.”

Based on the 2017 Supreme Court decision, the 4th U.S. Circuit Court of Appeals vacated the Redskins trademark ruling in 2018, ending the long legal battle over the name.

A handful of states have banned or restricted the use of Native American mascots in public schools and colleges. In 2019, Maine became the latest state to take such action. California's Racial Mascots Act which became law in 2017 prohibits using "redskins" as an athletic name or mascot.