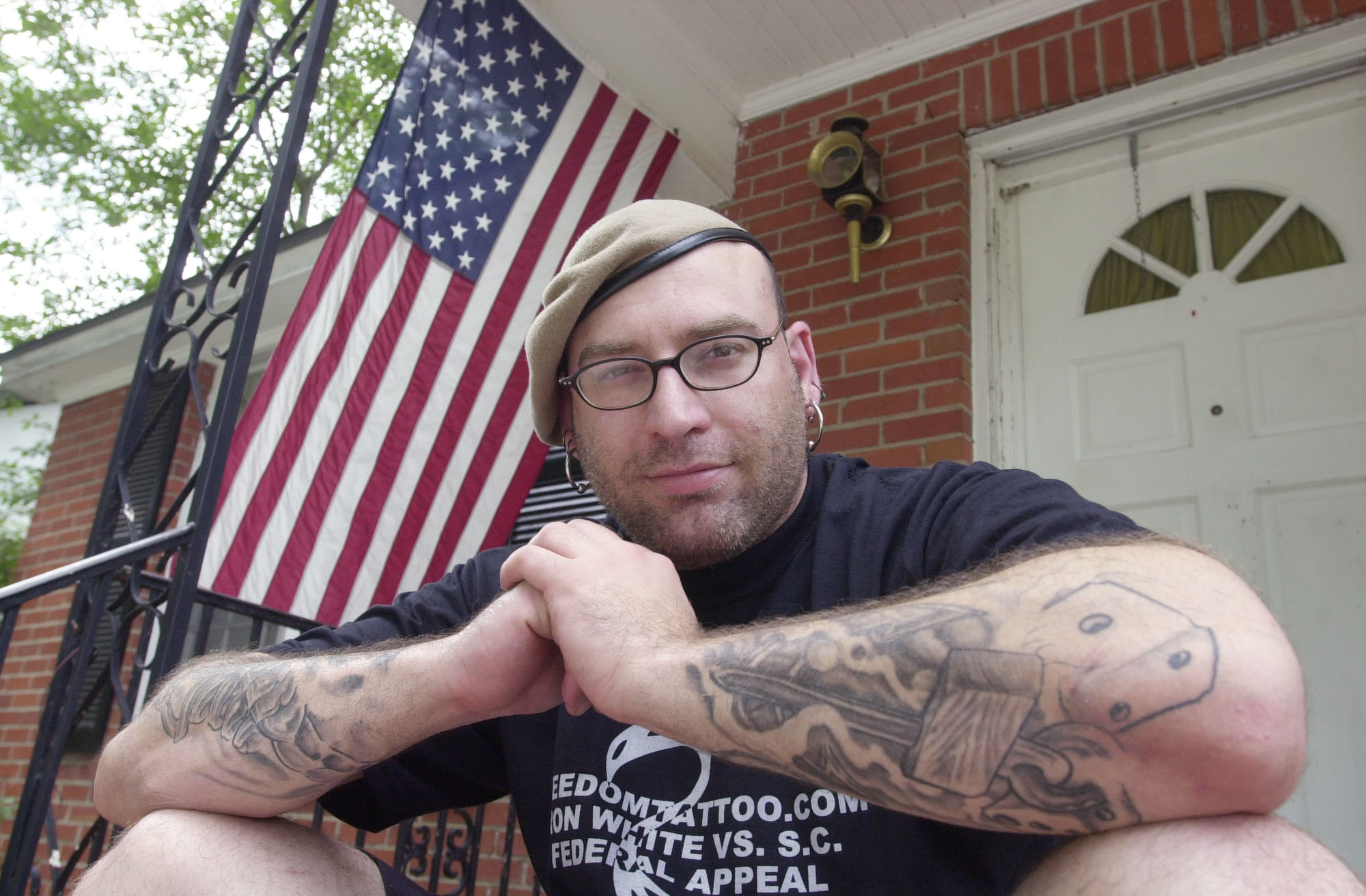 Ronald White, 33, a tattoo artist, unsuccessfully challenged South Carolina's ban on tattooing in State v. White (S.C. 2002). Two years later, however, South Carolina lifted the ban. In recent years, federal courts have invalidated city bans on tattoo parlors, finding that the tattoo and the process of tattoing are expressive conduct protected under the First Amendment. (Photo of White in Florence, S.C., in 2002 by AP/Mary Ann Chastian, used with permission from The Asssociated Press)

Tattoos, a form of body art in which a permanent or temporary mark or design is inscribed on a person’s skin, implicate the First Amendment because many municipalities have sought to impose restrictions on the art of tattooing. The restrictions range from total bans to bans on minors obtaining tattoos to zoning regulations to general public health, safety, and welfare concerns.

Although the word tattoo is generally traced to late eighteenth-century Polynesia, tattooing is an ancient art form. The earliest known tattooed body, found in the Austrian Alps, was from more than 5,300 years ago. Tattoos have been and continue to be part of many cultures worldwide, including in Greece, Japan, New Zealand, Rome, and South America (Frederick 2003:232). They often have a ritualistic or deeply personal significance beyond mere ornamentation. Whatever their purpose, tattoos represent a personal form of expression and self-identity for many who wear them and who feel that restrictions on tattoos infringe upon individual liberty and expression.

Courts have recently recognized tattoos as a form of speech

Traditionally, many earlier court decisions rejected challenges to tattoo bans.  Many determined that tattoos are not a form of speech sufficient to trigger First Amendment review, as in State ex rel. Medical Licensing Board of Indiana (Ind. App. 1986), and Yurkew v. Sinclair (D. Minn. 1980). In State v. White (S.C. 2002), the South Carolina Supreme Court rejected a challenge to a state law banning tattooing, determining that tattooing was not “sufficiently communicative to warrant protections and outweigh the risks to public safety.” Regardless, South Carolina became the 49th state to allow tattoos in 2004. In 2006, Oklahoma also lifted its ban on tattooing.

Other disputes involving tattoos have also raised First Amendment concerns. In Stephenson v. Davenport Community School District (8th Cir.1997), a federal appeals court invalidated a school district regulation against gang symbols that was challenged by an honor student who had a tattoo of a cross on her hand. The appeals court, however, invalidated the law on the basis of due process, not on First Amendment grounds. In Riggs v. City of Fort Worth (N.D.Tex. 2002), the courts rejected the First Amendment claims of public employees who had been forced to cover their tattoos in the workplace.