By Dale Mineshima-Lowe
Other articles in Groups and Organizations 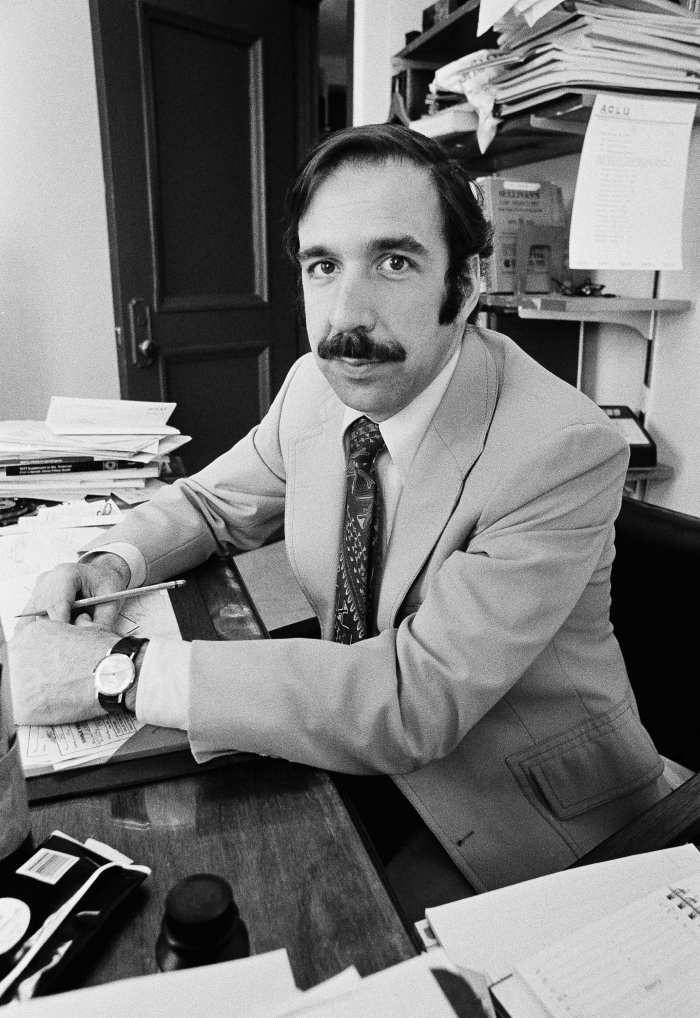 “Defending the rights of Nazis is one of the ugliest things a lawyer can do,” says David Goldberger, photographed in his Chicago office, on April 19, 1979. “But the First Amendment has to be protected.” The ACLU has sometimes drawn criticism for defending the First Amendment rights of unpopular groups, such as the Nazis who wanted to demonstrate in the heavily Jewish suburb, Skokie, Ill. (AP Photo)

The American Civil Liberties Union (ACLU) states as its mission the protection and preservation of First Amendment rights, equal protection under the law, due process, and the right to privacy.

It also works to extend rights to groups traditionally denied them. It seeks to do so through community outreach and education, legislation, and litigation.

Its participation in many of the major civil liberties cases in the United States has made it one of the most influential and controversial nongovernmental organizations in the country, drawing criticism from a cross-section of the political spectrum for its positions on contentious issues and its protection of the First Amendment.

ACLU founded after World War I with civil liberties under attack

The ACLU was founded in 1920 by a number of prominent figures, including Roger Baldwin (former head of the National Civil Liberties Bureau, a group born out of the American Union Against Militarism), Crystal Eastman, Albert De Silver, Helen Keller and others.

The ACLU also supported the Industrial Workers of the World (IWW), opposing government legislation that attacked the rights of the IWW and other labor unions to organize and meet. The ACLU’s predecessor, the National Civil Liberties Bureau, had opposed U.S. intervention in World War I and provided legal advice and assistance for conscientious objectors to the war and those being prosecuted under the Espionage Act of 1917 and the Sedition Act of 1918.

Notable episodes within the ACLU’s history include the barring of communists from leadership or staff positions within the organization in 1940, a policy that provoked much criticism from leftist attorneys and some of its later members.

More recently, the ACLU has been a strong voice in opposition to the USA Patriot Act of 2001, its renewal (Patriot II), and other legislation passed in response to the threat of terrorism following the al-Qaida attacks of September 11, 2001. The ACLU asserts that the law violates the letter and spirit of the Bill of Rights. The ensuing debate on the balance between the protection of civil liberties and security priorities has led to an increase in the ACLU’s activities as well as growth in its membership since 2001.

The ACLU, headquartered in New York City, has local chapters in each state. Each chapter has a certain amount of autonomy, allowing it to work independently of the national organization. In fact, many of ACLU’s cases originate at the local level and are handled by lawyers there who review state legislation on behalf of individuals or parties concerning civil liberties and First Amendment issues within the state.

In addition to its primary work on equal protection, due process and the First Amendment clauses concerning freedom of speech, assembly, and religion, the ACLU has also taken positions on a wide range of contentious issues, including desegregation, discrimination against gay, lesbian, bisexual, and transgender people, and the decriminalization of marijuana.

It has supported the separation of state and church by opposing government-sponsored displays of religious symbols on public property, affirmative action as a means of redressing discrimination, and reproductive rights of women.

Some of the ACLU’s more controversial stances involve its support of unpopular people or organizations in holding to its position that all citizens and residents of the United States be allowed to exercise their free speech rights.

For example, the ACLU defended the free speech rights for the Ku Klux Klan and neo-Nazi groups although these groups’ stances on other issues conflict with those of the ACLU. In another instance concerning the protection of free speech, the ACLU fought proposed anti-“spam” legislation in 2000 that it argued infringed free speech through the forced labeling of all e-mail.

ACLU has been involved with most major civil liberties cases

The ACLU’s most important activities have involved court tests of civil liberties issues.

The ACLU has been directly or indirectly involved in most major civil liberties cases contested in the courts since its founding, and it has been one of the most active and successful litigants before the Supreme Court in this arena.

These test cases include the 1925 Scopes monkey trial in Tennessee, in which it opposed a law against the teaching of evolution (1925); Hirabayashi v. United States (1943), where it unsuccessfully opposed curfews for Japanese American citizens during World War II; the landmark Brown v. Board of Education (1954), in which it successfully opposed racial segregation; and Loving v. Virginia (1967), where it successfully challenged state bans on interracial marriage.

Other cases handled by the ACLU include Roe v. Wade (1973), in which it successfully argued that a woman’s right to privacy extends to abortion; support in 1977 and 1978 for the efforts by the National Socialist Party of America, an offshoot of the American Nazi Party, to conduct parades and demonstrations in Skokie, Illinois; opposition to a 1981 Arkansas statute requiring that public schools teach the biblical account of creation as an alternative to the theory of evolution; and a challenge to Congress’s first major attempt to regulate Internet speech in Reno v. American Civil Liberties Union (1997).

In 2018, the ACLU adopted new case selection guidelines for deciding whether to take a speech case. The guidelines state that the ACLU should consider “the impact of the proposed speech and the impact of its suppression.” Factors militating against taking a case include, “the potential effect on marginalized communities; the extent to which the speech may assist in advancing the goals of white supremacists or others whose views are contrary to our values; and the structural and power inequalities in the community in which the speech will occur.”

The ACLU in 2021 represented Brandi Levy in a student free speech case. The Pennsylvania student had been suspended from the school cheerleading squad after she posted to Snapchat a profanity-laced rant over not making the varsity squad. One issue at play was whether the school could punish off-campus speech. The Supreme Court in June 2021 ruled that the school violated her First Amendment free speech rights, but did not foreclose a school from punishing off-campus speech in some circumstances.

This article was originally published in 2009 as written by Dale Mineshima-Lowe. It has been updated by First Amendment Encyclopedia staff as recently as June 2021. Mineshima-Lowe is managing editor for the Center of International Relations, researcher and associate lecturer in both the Department of Politics and Department of Geography at Birkbeck, University of London.