Americans United for Separation of Church and State

By Kevin R. den Dulk (Updated May 2017 by John R. Vile)
Other articles in Groups and Organizations 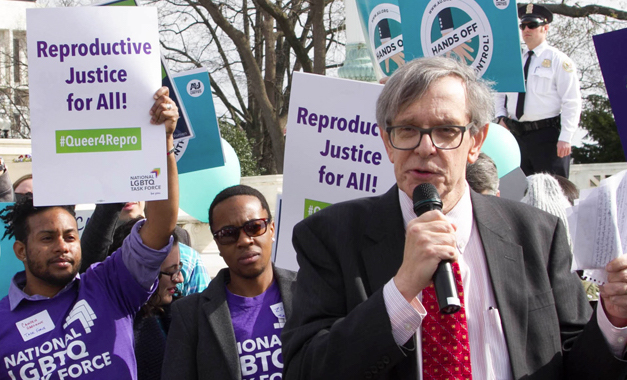 Americans United has been active in nearly every First Amendment church-state dispute, including fighting against government policy that is based on any particular religious group's theology, such as religious-based restrictions on women's healthcare. Its longtime executive director the Rev. Barry Lynn, pictured here, has been a high-profile advocate for the wall of separation between church and state. (Photo courtesy of Americans United for Separation of Church and State)

Americans United for Separation of Church and State is one of the oldest U.S. advocacy groups committed to the strict separation of government and religious institutions.

AU is committed to church-state separation

The organization was established in 1947 as Protestants and Others United, signaling its early fears of Catholic influence on U.S. democracy. Its change in name reflected the shifting political culture and a broader constituency, but its commitment to church-state separation remained unwavering.

Today, Americans United claims more than 50,000 members and representation in 4,000 places of worship. It has also matured into a professional organization, with a sizable permanent staff headquartered in Washington, D.C. Americans United has a tradition of irrepressible leadership, from Paul Blanshard, author of the controversial American Freedom and Catholic Power (1949), to Barry Lynn, an ordained minister in the United Church of Christ who maintains a high profile in the media on issues of church-state controversy.

During the past six decades, Americans United has been active in nearly every church-state dispute.

Much of its early work focused on state aid to parochial schools; indeed, the group was established soon after the landmark case Everson v. Board of Education (1947), in which the Court majority cited the language of strict separation while upholding a program that reimbursed parents who sent their children to parochial schools.

AU leaders feared that the case represented a harbinger of greater state support for Catholic schools.

By the early 1960s, Americans United had added school prayer and other church-state matters to its agenda.

The increasing prominence of religious conservatism in the late 1970s and 1980s became another issue of importance to Americans United’s efforts. Today, the group describes itself as leading "the fight against Religious Right groups that seek to tear down the wall of separation between church and state," taking positions on issues ranging from religion in public schools, government subsidies of religion, including through school vouchers, and religious-based objections to marriage or restrictions on women's healthcare.

AU has been involved in several First Amendment cases

Americans United is perhaps best known for its legal advocacy. It has taken part, either as an amicus curiae or case sponsor, in dozens of church-state cases at the state and federal levels.

It vigorously opposed the form of state aid at issue in the landmark Lemon v. Kurtzman (1971), and it was instrumental in Flast v. Cohen (1968), which established procedural rules for taxpaying citizens seeking to use the courts to challenge church-state partnerships.

In the case of Hosanna-Tabor Evangelical Lutheran Church and School v. EEOC (2012), Americans United joined with the ACLU and other groups others in urging the Court to limit the “ministerial exception” only to cases where adverse employment actions were religiously motivated.

AU is also involved in education on strict church-state separation

Legal advocacy is not the group’s only tactic. Indeed, in many ways its primary role is educational. Its monthly Church and State chronicles church-state conflict across the country and editorializes on timely issues from a separationist perspective.

The group generates innumerable press releases, legislative alerts, and e-mail communications across the spectrum of its concerns.

Most important, Lynn, the group’s executive director, has a national reputation in the media as the “go-to” person for a separationist view on a hot-button church-state dispute. Lynn, who headed the organization for 25 years, retired at the end of 2017.

This article first published in 2009 and has been updated. The primary contributor was Kevin R. den Dulk, a Professor of Political Science at Calvin University.