Commission on Obscenity and Pornography 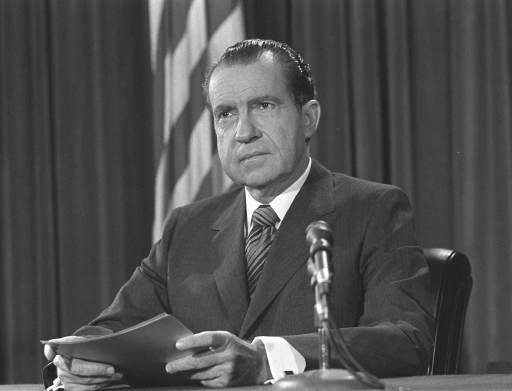 President Richard Nixon criticized the report realeased in 1970 by the Commission on Obscenity and Pornography, rejecting its "morally bankrupt conclusions and major recommendations." The report had recommended Congress focus its efforts on restricting access to pornography by juveniles, rather than targeting adults. (1970 file photo of Richard Nixon courtesy of Associated Press.)

The Commission on Obscenity and Pornography, established in 1968, recommended that Congress concentrate its efforts on restricting access to pornographic materials to juveniles and to adults wanting to avoid exposure to them rather than targeting consenting adults.

The commission’s report, issued in 1970, also recommended increased sex education and further research into the effects of pornography. The commission is perhaps best known for having its findings repudiated by the president during whose term it was released, President Richard M. Nixon.

The commission‘s report, which contained extensive social scientific findings, led one reviewer to observe, “The Report’s strong focus on data gathering is both a strength and a major weakness.” According to him, “the reader feels overwhelmed by the statistics...and they must be interpreted” (Maddock 1972: 231).

Keating, who had founded Citizens for Decent Literature (later Citizens for Decency Through Law) and who had sought an injunction that delayed publication of the original report, filed a dissenting report accusing the majority of being “dedicated to a position of complete moral anarchy.” He claimed to interpose common sense against the commission’s conclusions.

In a similar vein, Nixon said that he rejected the report’s “morally bankrupt conclusions and major recommendations.”

Asserted Nixon, “The Commission contends that the proliferation of filthy books and plays has no lasting harmful effect on a man’s character. If that were true, it must also be true that great books, great paintings, and great plays have no ennobling effect on a man’s conduct. Centuries of civilization and 10 minutes of common sense tell us otherwise.”

President Ronald Reagan would later appoint the Attorney General’s Commission on Pornography, which issued a much more negative report on the effects of pornography in 1986.