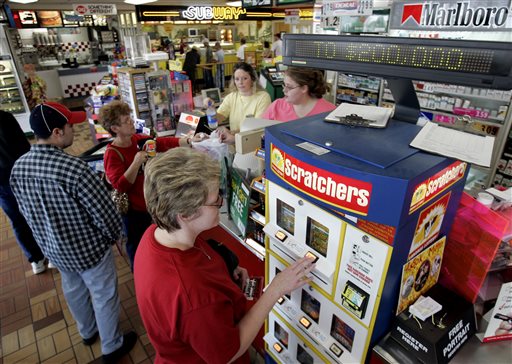 Joy Smith, of Kernersville, N.C., looks over the selection of Virginia Lottery scratch tickets in the E-Z Stop convience store in Ridgeway, Va., in this April 2013 photo. In 1993, the U.S. Supreme Court in United States v. Edge Broadcasting Co. upheld a federal law prohibiting the broadcasting of advertisements for state-run lotteries by broadcasters in nonlottery states. (AP Photo/Steve Helber, used with permission from The Associated Press.)

In Edge Broadcasting the Court specifically upheld a ban on a radio station’s advertisements for the Virginia lottery because the radio station was located three miles from the Virginia border in North Carolina (a nonlottery state).

Although advertising or commercial speech is a form of speech, it does not receive as much First Amendment protection as political speech. It is given some protection, however, and Justice Byron R. White applied the four-factor test for commercial speech developed in Central Hudson Gas and Electric Corp. v. Public Service Commission (1980) when delivering the opinion of the Court.

The threshold prong of the Central Hudson test “whether the speech concerns lawful activity and is not misleading” was assumed by the Court to have been met.

The second part of the test “whether the asserted government interest is substantial” was also met because the government does have a substantial interest in protecting state rights. In this case, the Court wanted to protect the right of a state to advertise its lottery if it has one, as well as the right of a nonlottery state to keep its residents from being exposed to lottery advertisements.

The third part of the test “whether the regulation directly advances the asserted interest” was also met; the Court wrote: “Although Congress surely knew that the stations in one state could be heard in another, it made the commonsense judgment that each North Carolina station would have an audience in that State, even if its signal reached elsewhere, and that enforcing the restriction would insulate each station’s listeners from lottery advertising and advance the government purpose in supporting North Carolina’s gambling laws.”

The fourth part of the test “whether it is not more extensive than is necessary to serve the interest” was also met; the Court reasoned that it should not apply standards more stringent than those used for political speech.

Justices John Paul Stevens and Harry A. Blackmun dissented, arguing that when speech is infringed upon, the interest being served must be proportional. “In my opinion, the Federal Government’s selective ban on lottery advertising unquestionably flunks that test; for the means chosen by the Government, a ban on speech imposed for the purpose of manipulating public behavior, is in no way proportionate to the Federal Government’s asserted interest in protecting the antilottery policies of nonlottery States.”

Other federal bans on lottery advertising, sports gambling struck down

In the 2018 decision, the Court had decided that Congress did not have power to dictate state policies with regard to sports gambling.

This article was originally published in 2009. Walter Huber is a Professor and Chair of the Department of Political Science and Criminal Justice at Muskingum University. He serves as the Director of the University's Center for Regional Planning and Development.