By Henry F. Carey
Other articles in Categories of Laws and Proposed Laws 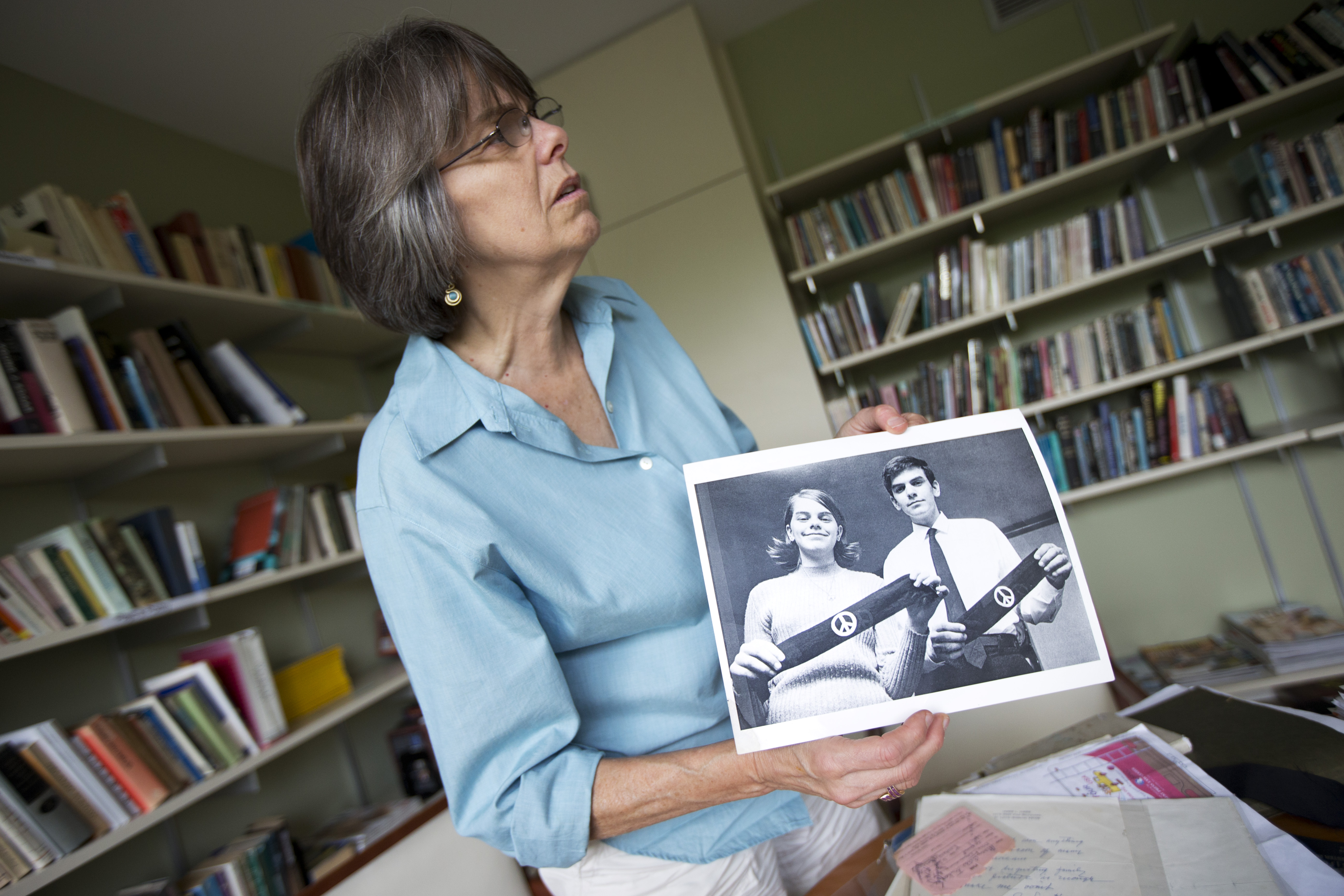 Dress codes are typically implemented by school districts and employers to promote learning, safety, and image. Although such regulations face First Amendment challenges by students, parents, and employees, the courts generally support the schools and employers. In this 2013 photo, Mary Beth Tinker, 61, shows an old photograph of her with her brother John Tinker to the Associated Press during an interview in Washington. In Tinker. v. Des Moines Independent Community School District (1969) the Court affirmed students’ First Amendment rights to free speech. Although the Court’s decision upheld students’ right to express themselves through certain items they wear, the Court has never specified whether that right bars uniforms, dress codes, or grooming requirements. (AP Photo by Manuel Balce Ceneta, used with permission from the Associated Press)

Dress codes are typically implemented by school districts and employers to promote learning, safety, and image. Although such regulations face First Amendment challenges by students, parents, and employees, the courts generally support the schools and employers.

School dress codes that merely exclude types of clothing, such as gang colors or provocative attire, tend to be enacted without controversy. When codes require uniform-like attire, however, many parents and children object.

Faced with increasing student-discipline problems, particularly from gang violence (involving gangs whose members often identified themselves through items of clothing) and a rise in more prurient clothing in the 1980s and 1990s, school systems in the 1990s began to introduce dress codes, school uniforms, and uniform-like dress codes.

In two State of the Union addresses, President Bill Clinton advocated public school uniforms, similar to those in parochial schools and many public schools overseas. The number of schools that adopted uniforms is not known, but in California, where they were first mandated, at least 50 schools abandoned their uniform requirements between 2000 and 2002.

Short of restricting pure political expression that does not disrupt learning, school officials have much constitutional latitude. The law in this area is far from settled, and the courts frequently side with the schools when dress requirements are challenged by students and parents.

In practice, however, the bitterness and the cost of litigation have reduced the practical maneuvers of school administrators and school boards.

If school officials attempt to punish students who exercise their expressive rights by wearing buttons, writing on fingernails, or protest messages on shirts, they could find themselves slapped with protected-speech or petition action lawsuits. In addition, in districts that have imposed incentives to increase participation in voluntary uniform and uniform-like dress codes, threats of or actual lawsuits have quickly emerged to halt this allegedly coercive practice.

Opponents of dress codes and uniforms are often fall into a few categories:

Similarly, the motives of advocates of mandatory uniforms or uniform-like dress codes vary from those who want to de-emphasize clothing and promote the egalitarianism implicit in similar clothing to those who primarily wish to avoid fights with their children over what to wear.

School administrators and teachers are divided on the issue. Some, particularly those in underperforming or less disciplined school environments, welcome uniforms and uniform-like dress codes. Supporters also argue that uniforms help identify intruders on school property.

Opponents contend, however, that uniforms also make it more difficult to identify distressed students, who may reveal symptoms of psychological disorders by wearing unusual clothing. They also point out that teachers often waste the first minutes of class trying to determine which of their students who are not in uniform have waivers and which are violating the code.

In addition, friction and discipline problems may worsen as rule breakers crowd the principal’s office. Over time, students may simply stop wearing the uniform or uniform-like dress, or they may mock the policy by wearing the uniform in a revealing way.

Scholars have studied the effects of uniforms and dress codes on discipline and academic performance, but their findings have been mixed: Researchers, including sociologist David L. Brunsma at the University of Alabama at Huntsville, have concluded that no relationship exists, that the uniform or dress code is much less important than most other factors, or even that uniforms lower test scores.

Employers can enact dress codes with a rational basis

Employers are entitled to enact dress codes, including uniforms, if there is a rational basis for the requirement, such as fostering a particular business image, encouraging harder work, or complying with public safety and health standards. They can ban anything reasonably deemed to be distracting from work, including body art.

Employers may also offer alternative dress codes, such as minimum requirements for “casual Fridays.” Although employees do not have a First Amendment right to dress in any way they choose to express themselves, they do have rights under the First Amendment to contest a dress code in a civil manner without fear of employer retribution.

The courts generally defer to employer judgments and have thus upheld prohibitions of torn clothing, sweat pants, short skirts or blouses, and hats.

Discriminatory dress codes would be struck down

Provided that the dress code is written clearly, is not excessive or onerous, is applied in a consistent fashion, and does not obviously discriminate on the basis of race, sex, religion, and perhaps ethnicity, the code is constitutional and does not violate Title VII of the Civil Rights Act of 1965.

A dress code that discriminated on the basis of gender would be struck down. However, dress codes that are consistent with social customs can be upheld. Thus, in Harper v. Blockbuster Entertainment (11th Cir., 1998), the 11th U.S. Circuit Court of Appeals upheld a rule requiring shorter haircuts for male employees.

This article was originally published in 2009. Henry F. Carey is Associate Professor of Political Science at Georgia State University.