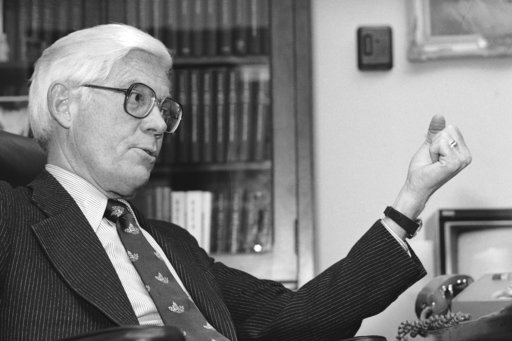 In this 1979 photo, Rep. John B. Anderson faces reporters in Washington. Anderson sought the Republican presidential nomination in 1980. He successfully fought hurdles to getting on the presidential ballot as a independent candidate in a First Amendment case that went to the Supreme Court, Anderson v. Celebrezze (1983). (AP Photo/John Duricka, used with permission from the Associated Press)

In Anderson v. Celebrezze, 460 U.S. 780 (1983), the Supreme Court struck down on First Amendment grounds a state law that imposed early filing requirements for an independent presidential candidate who wished to appear on the general election ballot.

With the Anderson decision, the Court created a test making it easier for candidates to secure ballot access when running for office.

In 1980, Rep. John Anderson of Illinois sought the Republican presidential nomination. After he lost the nomination to Ronald Reagan, Anderson announced in April 1980 that he would instead run for the presidency as an independent candidate.

To appear on the ballot as an independent, Anderson had to file petitions of candidacy in all 50 states. In some circumstances, he encountered resistance because of a variety of state law requirements, such as early filing dates or a minimum threshold of signatures from supporters in order to appear on the ballot.

In May 1980, when Anderson supporters sought to file nominating petitions to get him on the ballot in Ohio, election officials refused, pointing to a state law requiring independent candidates for president to file their petitions in March in order to appear on the ballot in November.

Writing for the Court, Justice John Paul Stevens asserted that in order to determine the constitutionality of the Ohio law, one had to weigh the character and magnitude of the injury to Anderson and his supporters’ First and Fourteenth Amendments rights against the interests asserted by the state in justifying the burden imposed by its law.

In this case, the First Amendment right of freedom of association of Anderson and his supporters had to be weighed against the state’s purported interest in early filing, which was to give its voters a sufficient period of time to consider the candidates before voting.

Because the burdens of the state’s interest were so severe, and because the law also had an impact on the national presidential election process, the Court found the early filing deadline unconstitutional.

The decision in Anderson led to the repeal of many state laws hindering ballot access for third parties and third-party candidates or to their being declared unconstitutional. The Court’s ruling made it easier for subsequent third-party or independent candidates, such as Ross Perot in 1992 and 1996, to appear on the presidential ballot.