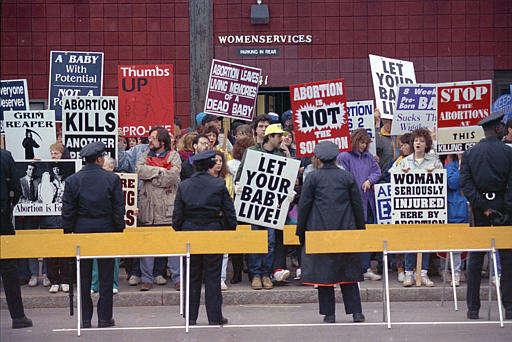 The use of RICO laws raises First Amendment issues implicating the right to freedom of association. For example, the National Organization of Women unsuccessfully tried to use the RICO laws to collect damages from Operation Rescue that used protests to shut down abortion clinics. In this photo, anti-abortion demonstrators protest ouside the Buffalo GYN Women Services Clinic in 1992. Police arrested about 65 abortion foes who blocked a back gate to the clinic as Operation Rescue prepared to wrap up a 13-day campaign of mass demonstrations aimed at shutting down the abortion clinics in Buffalo. (AP Photo/Bill Sikes, used with permission from the Associated Press)

Congress passed the Racketeer Influenced and Corrupt Organizations Act (RICO) of 1970 in an attempt to combat organized crime. The application and use of the law has raised important First Amendment issues implicating the right to freedom of association.

In addition, the law makes it an offense to conspire to engage in any of the above activities. Actions defined as racketeering under RICO include extortion, violation of the Hobbs Act of 1948, and other crimes that may interfere with interstate commerce.

RICO’s breadth is significant, applying to any “pattern of racketeering activity,” which is defined as having within the preceding 10 years committed two or more predicate acts — that is, such acts as mail fraud, murder, or trafficking in obscene material on which a subsequent RICO prosecution is based, or predicated. RICO has several civil law provisions that allow for private parties to collect damages if a violation occurs.

Although the main focus and use of RICO is directed toward organized crime, it has also been applied to various white-collar crimes, such as fraud prosecutions. But the most controversial application has involved activity traditionally thought to be covered or protected by the First Amendment.

For example, in Scheidler v. National Organization for Women (1994), the Supreme Court ruled that RICO could be used to collect damages against anti-abortion groups seeking to shut down women’s clinics.

In this case, the National Organization for Women (N.O.W.) sought to collect damages from Operation Rescue, an anti-abortion organization. The Court ruled that the racketeering activity need not have an economic motive. In subsequent decisions, however, including in Scheidler v. National Organization for Women (2006), the Court reversed ground, asserting that the protesters had not obtained property from clinics as required under the Hobbs Act in order to show extortion.

In Alexander v. United States (1993), the Court ruled that RICO forfeiture laws did not violate the First Amendment.

At issue was an individual convicted of RICO and federal obscenity laws. Because the owner’s conviction for the sale of several obscene products was deemed a pattern of predicate activity, he was ordered to forfeit his businesses and nearly $9 million obtained as a result of racketeering activity.

RICO laws continue to be used expansively to combat organized crime. Although the act can be used against protesters, courts and prosecutors are less likely to use it for that purpose than they have in the past.