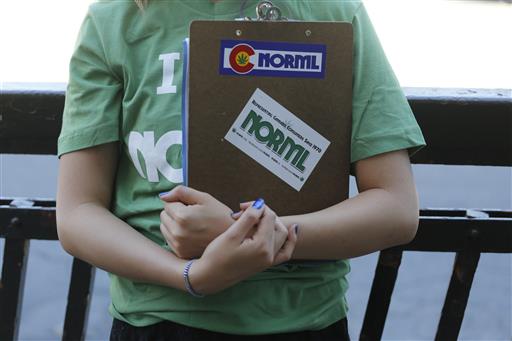 In Buckley v. American Constitutional Law Foundation, 525 U.S. 182 (1999), the Supreme Court struck down Colorado’s requirements that people circulating petitions to place items on the general ballot must be registered voters, wear identification tags with their names and addresses, and file lengthy monthly disclosures. In this June 11, 2016 photo, a marijuana reform advocate with the group NORML holds a clipboard while waiting for passersby to sign a petition to get a pot club initiative on the ballot in the next election, in Denver.  (AP Photo/Brennan Linsley, used with permission from the Associated Press)

In Buckley v. American Constitutional Law Foundation, 525 U.S. 182 (1999), the Supreme Court struck down Colorado’s requirements that people circulating petitions to place items on the general ballot must be registered voters, wear identification tags with their names and addresses, and file lengthy monthly disclosures.

The decision followed an earlier ruling in Meyer v. Grant (1988), in which the Court struck down the state’s prohibition of payments to individuals for circulating petitions.

In the majority opinion, Justice Ruth Bader Ginsburg wrote that restricting those who could circulate petitions to registered voters would severely limit the number of such individuals and produce “a speech diminution of the very kind produced by the ban on paid circulars at issue in Meyer.” Although it was relatively easy for those 18 and older to register, this did “not lift the burden on speech at circulation petition time.”

Acknowledging the state’s right to require those circulating petitions to file an affidavit stating their names and addresses, Ginsburg found that requiring them to wear badges “inhibits participation in the petitioning process.” She observed that the Court had struck down a ban on the distribution of anonymous campaign literature in McIntyre v. Ohio Elections Commission (1995).

Moreover, “the badge requirement compels personal name identification at the precise moment when the circulator’s interest in anonymity is greatest.”

Although the Court had upheld some campaign-disclosure provisions in Buckley v. Valeo (1976), it also required “exacting scrutiny” in such cases. Ginsburg argued that there was less danger of “ ‘quid pro quo’ corruption” when money was given to volunteers rather than to candidates and was also less at the petition stage than at the voting stage.

She agreed with the circuit court that “listing paid contributors and their income from circulation ‘forces paid circulators to surrender the anonymity enjoyed by their volunteer counterparts.’ ”

Justice Clarence Thomas wrote a concurring opinion arguing that the laws at issue should be subject to strict scrutiny and that Colorado’s did not meet this burden.

Other justices would have upheld parts of the bill

Chief Justice William H. Rehnquist would have upheld the provision requiring petition circulators to be registered voters as a means of preventing fraud and assuring that state citizens decided state issues; he would have also upheld the disclosure requirements, but he thought the badge requirements to be unconstitutional.

Justice Sandra Day O’Connor argued for striking down the badge requirements but felt that requiring state citizenship for circulators was “a permissible regulation of the electoral process.” She considered the disclosure requirements only an incidental burden on First Amendment rights.