By Leonard Williams
Other articles in Foreign Advocates of Freedom 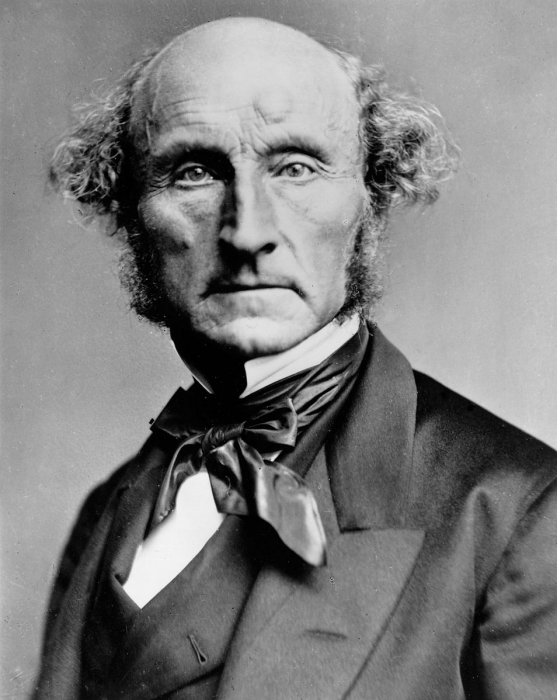 John Stuart Mill (1806–1873), one of the most influential philosophers of the nineteenth century, became a guiding light for modern liberalism and individual liberty. Mill’s arguments for freedom of thought and discussion, for liberty of tastes and pursuits, and for limits on the authority of society are often repeated in contemporary debates regarding freedom of speech and association. Practical applications of First Amendment principles often rest upon allusions to his ideas, most famously expressed in his essay On Liberty (1859). (Image via Wikimedia Commons, by the London Stereoscopic Company circa 1870, public domain)

John Stuart Mill (1806–1873), one of the most influential philosophers of the nineteenth century, became a guiding light for modern liberalism and individual liberty.

Mill’s arguments for freedom of thought and discussion, for liberty of tastes and pursuits, and for limits on the authority of society are often repeated in contemporary debates regarding freedom of speech and association. Practical applications of First Amendment principles often rest upon allusions to his ideas, most famously expressed in his essay On Liberty (1859).

Mill was a philosopher and writer

Mill was born in London, the son of James Mill, a prominent British intellectual. He was a child prodigy, with a gift for foreign languages and philosophical thought. As he wrote in his Autobiography, published posthumously, he suffered a mental breakdown in 1826 but continued to spend much of his time refining the philosophy of his father and his father’s friend, Jeremy Bentham, a noted reformer and utilitarian philosopher.

In addition to writing, Mill served for a time in Parliament. He was an advocate of women’s rights, including women’s suffrage, apparently influenced on this point by Harriet Taylor, whom he married in 1851. Among Mill’s works are A System of Logic (1843), Principles of Political Economy (1848), Thoughts on Parliamentary Reform (1859), and The Subjection of Women (1869).

Some view On Liberty as the intellectual precursor of the marketplace of ideas theory that still predominates in modern First Amendment jurisprudence. The purpose of Mill’s essay was to assert one principle: that self-protection is the only legitimate reason to interfere with another person’s liberty. In Mill’s words, “the only purpose for which power can be rightfully exercised over any member of a civilized community, against his will, is to prevent harm to others.” To assert the harm principle is one thing; to defend it, quite another. In his essay, Mill forswears the use of contractarian arguments or ideas of abstract right; instead, he defends individual liberties on utilitarian grounds — not the utility of Bentham and his father but “utility in the largest sense, grounded on the permanent interests of man as a progressive being.”

Mill’s utilitarian case for the liberty of thought and discussion was a forceful one. He asserted that the problem with any effort to suppress nonconforming viewpoints is that the guardians of orthodoxy wrongfully presume their own infallibility. What now appears unorthodox or even false may later turn out to be both widely accepted and true. Orthodoxy, if left unchallenged, becomes merely a “dead dogma” rather than a living truth. Only by encountering alternative ideas does a doctrine, no matter how true, have any meaning or vitality.

Ultimately, for Mill, progress requires that humanity reap as much truth as it can. The only hope for acquiring social and moral truth, though, is through the “reconciling and combining of opposites” or the “collision of adverse opinions” — that is, through what we label the marketplace of ideas. Because no one doctrine or belief contains the whole truth, society must remain open to any and all points of view if it has any hope of producing happiness.

Mill also argued for the need to respect individuality

Mill makes similar arguments regarding the need to respect individuality, as manifested not only in political beliefs but also in individual tastes and pursuits. He again claims that society should never interfere with anyone’s choices and habits, except insofar as they cause harm to others. Mill’s primary reason for this position is that experiments in living permit people to find their own paths to self-fulfillment. Experiments in living are a vehicle for the exercise of autonomy, enabling personal growth and moral development. By giving free rein to experiment and by encouraging eccentricity, society may progress toward the good life.

Mill’s critics focus on a number of his ideas. Some debate whether Mill is a consistent utilitarian, or whether he is an advocate of negative liberty — that is, of freedom from state control. Others question whether the distinction between self-regarding interests and those matters affecting others can be applied meaningfully in actual situations.

Still others quarrel with Mill’s very conception of free speech. As legal and literary theorist Stanley Fish contends, “There is no such thing as free speech.” Fish means that outside the academic seminar, there is no marketplace or situation where ideas exist or function autonomously and unconstrained, independent of the circumstances that make them intelligible in the first place. Every idea is an incitement; every word, potentially, a fighting word. There can be no valid sense in which speech is free. Speech is never free of state pressure; there are always limits to what is permitted. Speech is never free of consequences; it advances some interests over others; it matters. In other words, Mill’s harm principle is always already violated.

Still, Mill’s arguments on behalf of individual liberty have played an important role in fleshing out the doctrines underlying the First Amendment. The harm principle has been used to think through the question of whether there are permissible limits to speech — for example, limits associated with clear and present dangers, fighting words, hate speech, even threats to national security. Most often, though, Mill appears as a progenitor of First Amendment absolutism: “if all mankind minus one were of one opinion, and only one person were of the contrary opinion, mankind would be no more justified in silencing that one person, than he, if he had the power, would be justified in silencing mankind.”

This article was originally published in 2009. Leonard Williams is professor emeritus of political science with Manchester University in North Manchester, Indiana. He has taught courses in political theory and American politics, including constitutional law. His research work focuses on political ideologies, with a specialty in contemporary anarchist thought. His most recent book is Anarchism: A Conceptual Approach (co-edited with Benjamin Franks and Nathan Jun).