By Gene C. Gerard
Other articles in Scholars 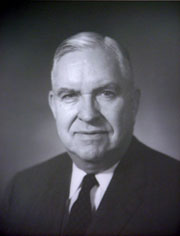 As solicitor general of the United States, Erwin Griswold argued unsuccessfully, in New York Times Co. v. United States (1971), that the publication of the Pentagon Papers threatened the security of the United States and that security concerns outweighed the First Amendment rights of a free press. (Image via Wikimedia Commons, public domain)

Griswold was born in East Cleveland, Ohio. After graduating from Harvard Law School in 1928, he worked in the Office of the Solicitor General of the United States as a staff attorney. From 1929 to 1934 he was a special assistant to the attorney general. He then taught at Harvard Law School, where he was dean from 1946 to 1967. In 1967 President Lyndon B. Johnson appointed him to serve as solicitor general. Richard M. Nixon asked him to remain in this position after he became president in 1969.

In 1971 the New York Times began to publish sections of a top-secret Defense Department study known as the Pentagon Papers, which Daniel Ellsberg, one of its authors, had leaked to the press.

The study, comprising 4,000 pages of documents and 3,000 pages of analysis, disclosed America’s political and military involvement in Vietnam from 1945 to 1967. The documents detailed air strikes over Laos, raids along the border of North Vietnam, and offensive military actions taken before government leaders had informed the American public of their actions. All of this had transpired while President Johnson’s administration was promising not to expand America’s involvement in the Vietnam War.

Both newspapers appealed, and the Supreme Court decided to hear both cases under New York Times Co. v. United States.

In his defense of the federal government, Griswold argued that continued publication of the documents would cause a “grave and immediate danger to the security of the United States.” In a 6-3 ruling in the case, the Supreme Court found that the injunctions imposed on the newspapers infringed on the First Amendment right to a free press, because the government had not overcome the “heavy presumption against” prior restraint of the press.

After resigning as solicitor general in 1973, Griswold joined a Washington, D.C., law firm.

While in private practice he wrote an op-ed article for the Washington Post, acknowledging that the release of the Pentagon Papers had not threatened the government and asserting that the public should view government demands for secrecy skeptically.

This article was published by Gene C. Gerard in 2009.