By John R. Vile
Other articles in Scholars, Lawyers 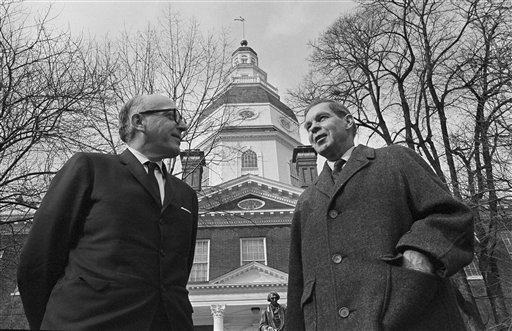 Leo Pfeffer, left, a New York attorney, and William Marbury, a Baltimore lawyer, stand in front of the Maryland Statehouse in Annapolis where they were on opposing sides in a suit challenging the use of public funds to be given to religious colleges in 1965. Pfeffer was one of the country's most active litigators on First Amendment separation of church and state issues. (AP Photo/William A. Smith, used with permission from the Associated Press)

Leo Pfeffer (1909–1993), one of the twentieth century’s most active litigators on church-state issues, was a prolific writer who advocated religious liberty and strict separation of church and state.

Born in Hungary, the son of a rabbi, Pfeffer immigrated with his parents to New York City when he was two. After attending a secondary school that later became Yeshiva University, he earned a bachelor’s degree at New York’s City College and a law degree from New York University.

Beginning in 1945, he served for most of his career in various staff positions at the Commission on Law and Social Action of the American Jewish Congress, which litigated for separation of church and state. He lectured at several universities and was as an attorney for the New York Committee for Public Education and Religious Liberty.

In Illinois ex rel. McCollum v. Board of Education (1948), Pfeffer successfully argued against the “released time” program in schools, in which students were given time for religious instruction. (Pfeffer’s parents had withdrawn him from public schools after confronting a similar program.)

He opposed the child benefit theory, on the basis of which states sometimes funneled money to families for textbooks and other expenses incurred as part of a parochial school education.

He presented arguments in an amicus brief in Lemon v. Kurtzman (1971), which led the Supreme Court to develop its three-part Lemon test that established rules for legislation concerning religion.

He was less successful in persuading the Court, in Tilton v. Richardson (1971), to oppose all aid to religious colleges and universities.