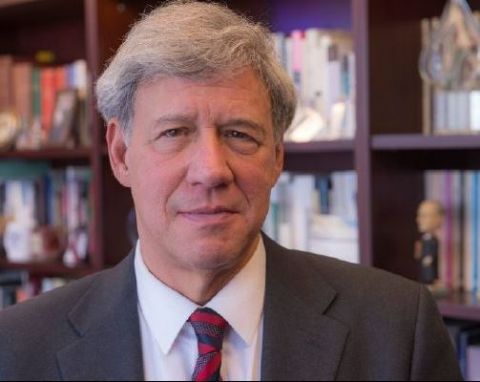 Geoffrey Stone (The University of Chicago)

Geoffrey R. Stone (1946– ), a law professor at the University of Chicago, is a leading First Amendment scholar. He has written or edited numerous books on a variety of free expression topics. Among them are Eternally Vigilant: Free Speech in the Modern Era, with Lee Bollinger (2001), and Perilous Times: Free Speech in Wartime from the Sedition Act of 1798 to the War on Terrorism (2004), an award-winning book that examines the phenomenon of wartime censorship throughout American history, Top Secret: When Our Government Keeps Us in the Dark (2007), and Sex and the Constitution: Sex, Religion, and Law from America’s Origins to the Twenty-first Century (2017).

Born in the Bronx, New York, Stone earned an undergraduate degree from the University of Pennsylvania and a law degree from the University of Chicago. He then clerked for J. Skelly Wright of the Court of Appeals for the District of Columbia (1971–1972) and for Justice William Brennan on the Supreme Court (1972–1973) before returning to Chicago. In 1978 he became a full professor at the university and has served as the dean of the law school and provost of the university. He is the Edward H. Levi Distinguished Service Professor.

Stone also has written scores of law review articles on First Amendment issues, including “Content-Neutral Restrictions” (1987), for the University of Chicago Law Review, which remains an oft-cited analysis of the Supreme Court’s content-discrimination principle in First Amendment jurisprudence. He is coeditor of the Supreme Court Review, an influential legal journal published at the University of Chicago.