By John R. Vile (Updated June 2017)
Other articles in Judges and Justices 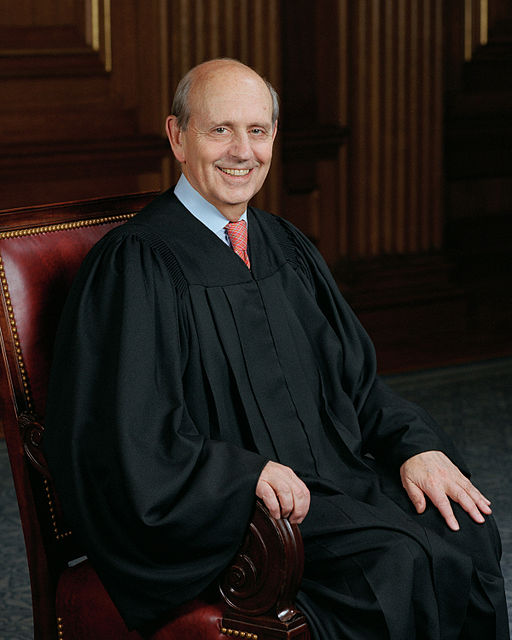 Justice Stephen Breyer's concurring opinions in freedom of speech cases have often advocated a more narrow reading of free speech rights than his colleagues, according to one analysis. Breyer also has been less supportive of commercial speech and of corporate campaign contributions than most of his colleagues. (Photo by Steve Petteway, Collection of the Supreme Court of the United States, public domain via Wikimedia Commons)

Stephen G. Breyer (1938– ) took his seat on the Supreme Court bench in 1994, replacing retired justice Harry A. Blackmun. Appointed by President Bill Clinton, he is generally regarded as a moderate liberal who decides cases pragmatically rather than on the basis of rigid ideology. His First Amendment jurisprudence reflects this approach, often making his votes more difficult to predict than those of fellow justices.

Born in San Francisco in 1938, Breyer was educated at Stanford University, Oxford University, and Harvard Law School; he later taught administrative law at Harvard as well. As a law clerk, Breyer wrote the first draft of Justice Arthur J. Goldberg’s concurring opinion on the right to privacy in Griswold v. Connecticut (1965). From 1965 to 1967, Breyer was a special assistant to Assistant Attorney General Donald F. Turner in the Justice Department, where he developed his expertise in anti-trust law. He then worked as an assistant special prosecutor during the Watergate investigations. Breyer served as a judge on the First Circuit Court of Appeals from 1981 to 1990 and was a member of the United States Sentencing Commission from 1985 to 1989.

Breyer has been involved in many First Amendment cases

Breyer concurred with the Court’s ruling in Bartnicki v. Vopper (2001) that prevented criminal liability from being imposed on those who published illegally intercepted wire communications. He stirred concern among some First Amendment experts, however, when he stated in his concurrence that ”the Constitution permits legislatures to respond flexibly to the challenges future technology may pose to the individual’s interest in basic personal privacy.”

He dissented in the Court’s upholding of the Copyright Term Extension Act of 1998 in Eldred v. Ashcroft (2003), emphasizing that the copyright clause must be read consistently with the First Amendment: “The Copyright Clause and the First Amendment seek related objectives — the creation and dissemination of information. When working in tandem, these provisions mutually reinforce each other. . . .At the same time, a particular statute that exceeds proper Copyright Clause bounds may set Clause and Amendment at cross-purposes, thereby depriving the public of the speech-related benefits that the Founders, through both, have promised.”

Justice Breyer joined Justice Stevens’ dissent in Citizens United v. Federal Election Commission (2010), thus siding with what they considered to be the free speech of individuals over that of corporations; he took a similar stance in McCutcheon v. Federal Election Commission (2014).  Breyer authored his own dissent in Holder v. Humanitarian Law Project (2010), reading a summation of his opinion from the bench expressing his view that the individuals involved in providing aid were attempting to use peaceful means to bring about change.

He issued the lone dissent in Brown v. Entertainment Merchants Association (2011), which, along with other opinions, showed special concern about the need to shield minors from pornography.  Breyer authored the Court’s decision in Walker v. Texas Division, Sons of Confederate Veterans (2015), which upheld the right of Texas to refuse to issue license plates with pictures of the Confederate flag.

Pomerance found that Breyer’s concurring opinions often advocate a narrower reading of free speech rights than opinions by his colleagues.  Breyer is far less likely to require that the Court apply strict scrutiny in such circumstances, in part because he appears to have greater faith in the motives of those who govern and in part because he believes that the laws should reflect popular sentiment.  Breyer is less supportive of commercial speech and of corporate campaign contributions than most of his colleagues.

Professor Eugene Volokh ranked Breyer in last place among the justices with regard to how often he issued pro–First Amendment opinions in free speech cases from 1994 to 2002.

Breyer wrote Active Liberty (first published in 2006) to explain his judicial philosophy of interpreting the Constitution, including criticism of originalist, or textualist, methods as a primary method for approaching difficult constitutional questions. In the book, he encourages citizens to increase their understanding of the Constitution. In 2010 he published Making Our Democracy Work, and in 2015 he published The Court and the World.  With the death of Antonin Scalia, Breyer is now the fourth-longest-serving justice on the current Court.