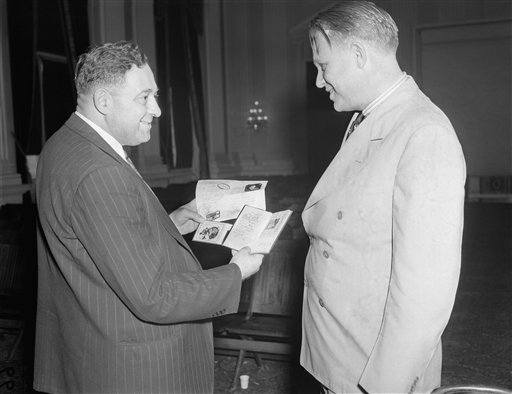 Walter Pollak's major contributions to First Amendment jurisprudence involved representing American Communists Benjamin Gitlow and Charlotte Whitney in free speech cases that went to the Supreme Court. In this 1939 photo, Gitlow who had since left the Communist Party shows House Un-American Activities chairman Martin Dies Canadian, Russian and Communist passports which were products of "passport factories" operated in Berlin and Moscow to provide forged credentials for world travel by secret agents and party workers. (AP Photo, used with permission from the Associated Press)

Walter Heilprin Pollak (1887–1940), one of the nation’s leading attorneys in the 1920s, was a strong supporter of the Bill of Rights and freedom of speech. He argued several important First Amendment cases before the Supreme Court.

Born in Summit, New Jersey, Pollak earned undergraduate and law degrees from Harvard University in 1907 and 1910. He was in private practice at several New York law firms, including Engelhard, Pollak, Pitcher, Stern & Clark, where he remained for 20 years. During World War I, he served on the War Industries Board.

Pollak’s major contributions to First Amendment jurisprudence lie in his advocacy for Benjamin Gitlow, in Gitlow v. New York (1925), and for Charlotte Whitney, in Whitney v. California (1927). Gitlow had been convicted of criminal anarchy and Whitney for helping to establish a Communist Party organization.

Although both Gitlow and Whitney lost their Supreme Court cases, the decisions remain lasting legacies of First Amendment jurisprudence. In Gitlow, the majority ruled against the defendant but established that freedoms of speech and press “are among the fundamental personal rights and ‘liberties’ protected by the due process clause of the Fourteenth Amendment from impairment by the States.”

Justice Louis D. Brandeis, in his Whitney concurrence, which reads more like a dissent, wrote perhaps the most eloquent justification for freedom of speech in the annals of First Amendment history.

Pollak also argued for the reversal of death sentences for the Scottsboro Boys in Powell v. Alabama (1932) and Norris v. Alabama (1935). His defense in these two cases exemplifies his commitment to the Bill of Rights.