By Martin Gruberg
Other articles in Judges and Justices 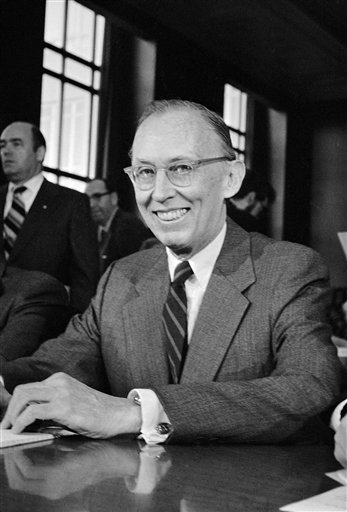 Justice Lewis F. Powell, Jr., at his confirmation hearing in 1971. He was basically conservative on matters of crime and law enforcement but a liberal on First Amendment matters concerning separation of church and state. (AP Photo/Henry Griffin, used with permission from the Associated Press)

Lewis F. Powell Jr. (1907–1998), who served on the Supreme Court from 1972 to 1987, was a thoughtful, pragmatic, and conciliatory justice. He was basically conservative on matters of crime and law enforcement but a liberal on First Amendment matters concerning separation of church and state.

Powell had a prolific pre-Court career

Lewis Powell, a Phi Beta Kappa, was first in his class at Washington and Lee Law School (1931) and earned a master’s degree from Harvard Law School (1932). During World War II he rose to the rank of colonel in the armed forces. He then became one of Virginia’s most distinguished attorneys, specializing in corporate law and litigation at a firm in Richmond, Virginia. From 1952 to 1961 Powell served as chairman of Richmond’s school board, where he was largely responsible for the city’s peaceful integration of the public schools.

As president of the American Bar Association, in 1964 and 1965, he proposed more support for legal aid to the poor. He was also president of the American College of Trial Lawyers (1969–1970) and the American Bar Foundation (1969–1971). During President Lyndon B. Johnson’s term, Powell served on the National Commission on Law Enforcement and Administration of Justice. In 1971 President Richard M. Nixon nominated him to succeed Hugo L. Black on the Supreme Court. The Senate confirmed his nomination, 89-1.

Powell considered Regents of the University of California v. Bakke (1978) to be the most important decision he rendered on the Court. With his swing vote he sided with the four justices who struck down the formula of minority set-asides at the Medical School at the University of California, Davis. Powell considered set-asides to be a quota. He later joined the other camp in upholding considerations of race in university admissions.

In terms of First Amendment cases, Powell sided with the property rights of a private shopping center over the rights of those who wished to distribute leaflets in Lloyd Corporation, Ltd. v. Tanner (1972), a 5-4 decision. However, in Virginia State Board of Pharmacy v. Virginia Citizens Consumer Council, Inc. (1976), he invalidated a law that had limited the ability of pharmacists to advertise, thus opening the way to providing more protection for commercial speech. Powell wrote the decision in Gertz v. Robert Welch, Inc. (1974), holding that Elmer Gertz, the defendant’s lawyer in a murder case, was not a public figure as defined by the standard of libel established in New York Times Co. v. Sullivan (1964).

Powell was never on the losing side of a religion case

In the 30 religion cases in which Powell participated, he was never on the losing side. In Aguilar v. Felton (1985), he was part of the majority that struck down parochial-aid programs in New York City and in Grand Rapids, Michigan. Similarly, in an earlier case, Wolman v. Walter (1977), he had joined in upholding an Ohio parochial-aid law.

Powell was the author of a unanimous decision, Board of Directors of Rotary International v. Rotary Club of Duarte (1987), that affected First Amendment rights of association by stating that the Constitution did not protect sex discrimination by most all-male clubs, especially those used for business purposes or by nonmembers.

After retiring from the Supreme Court in 1987, Powell served as a federal appeals court judge until 1996.