By John R. Vile
Other articles in Religious Perspectives and Churches 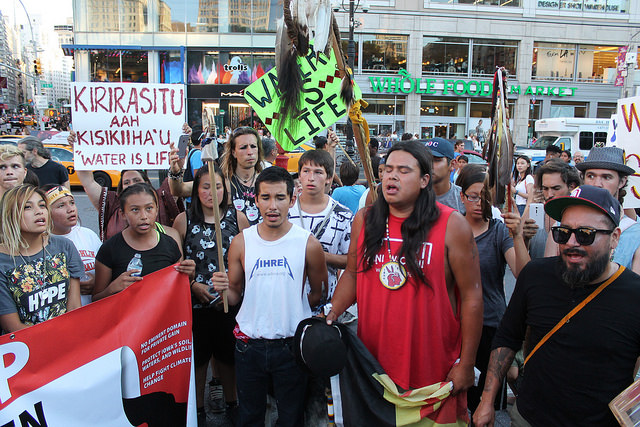 Sioux youth from the Standing Rock Indian Reservation in North Dakota rallied with supporters in Union Square in New York in August 2016 after running 2,000 miles across the United States to protest the proposed Dakota Access Pipeline. (Photo by Joe Catron, via Flickr, CC-BY-NC 2.0)

Although some Europeans arrived in the American colonies with the idea of converting Native Americans to Christianity (which by itself led to resistance), most arrived with designs on Indian land. Thus throughout much of U.S. history, these groups have had a hostile relationship. At times, national and state governments have denied rights to Native Americans, including those protected by the First Amendment. In turn, Indian religious beliefs have sometimes posed dilemmas for the application of such freedoms.

Government moved Native Americans to reservations to be governed by tribes

Most Native Americans regarded the land as something that belonged to everyone, but Europeans brought with them the idea of individual property ownership. As the population of European immigrants increased (often because the diseases they brought with them decimated the Native American populations) and their claims to the land expanded, Native Americans were forced to fight or retreat, and frequently had to sign treaties that recognized the rights of the federal government to their lands. Over time, the government moved many Native Americans to reservations, where the tribes exercised powers not unlike those the states exercised over their own citizens.

In the document that emerged from the 1787 Constitutional Convention, “Indians not taxed” were exempted from being counted in the formula for representation in the U.S. House of Representatives. Also, Congress was given the explicit power to regulate commerce with Native Americans as well as to enter into treaties with them. In 1800, not long after adopting the Sedition Act, Congress also adopted “An Act for the preservation of peace with the Native American tribes” that limited First Amendment speech and press freedoms as a way of suppressing Native American criticism of U.S. policies and preventing Europeans from stirring them to action.

Courts have struggle with the government relationships of Native Americans

Over time, the courts have struggled with the relationship between Native American nations and the U.S. federal and state governments. In Cherokee Nation v. Georgia (1831), the Supreme Court recognized that the tribes constituted “denominated domestic dependent nations.” In Worcester v. Georgia (1832), the Court tried to intervene to protect missionaries in Cherokee Indian Territory whom Georgia was trying to evict because of their support for the Cherokees’ resistance to removal from tribal lands. The case was largely mooted, however, when President Andrew Jackson agreed to the removal of the Cherokee to Oklahoma—a decision that resulted in many deaths along the Trail of Tears.

In the 1880s, Roman Catholics became involved in efforts to educate Native Americans, sometimes with the help of the federal government. After some Protestants objected, Congress adopted an Indian Appropriations Act in 1896 that ended the funding, although some support continued through trial trust and treaty funds.

Congress did not extend citizenship to all Native Americans until 1924. Even though they have remained citizens, government policies toward them have shifted several times. Law professor Rennard J. Strickland (1992) has divided federal policies into five eras:

In recent decades, Congress has adopted numerous laws relevant to Native Americans. The Indian Civil Rights Act of 1968 extends all of the provisions of the First Amendment (except the establishment clause, which might disadvantage tribal religions) and most other provisions of the Bill of Rights to Native Americans. Another law protects sacred Indian shrines. In 1978 Congress adopted a largely hortatory statement of policy in the American Indian Religious Freedom Act. And in other laws it has set aside certain lands in trust for Native Americans and protected Indian graves and funeral objects. Congress has also given Native Americans access to the feathers of American eagles (otherwise forbidden in an attempt to save the species).

Native American religious practice has led to conflict with the government

In part because of past efforts at Christianization, modern Native Americans have a pluralistic religious life that mirrors the larger society. Since the end of the nineteenth century, the Native American religion has often been associated with the ceremonial ingestion of peyote, a mildly hallucinogenic product of cacti. This practice has led to conflict with the war on drugs.

In Employment Division, Department of Human Resources of Oregon v. Smith (1990), the Supreme Court ruled that states were not required to exempt Native Americans who ingested peyote from the general application of its criminal laws (however, in 1994 Congress amended the American Indian Religious Freedom Act to allow Native Americans to ingest peyote for religious purposes). This decision followed Lyng v. Northwest Indian Cemetery Protective Association (1988), in which the Court refused to prohibit the federal government from building a road through a site in a national forest that was sacred to Native Americans.

In 2016, Native Americans were involved in protests over a pipeline in North Dakota that many believed threatened drinking water. Police eventually used pepper spray and dogs to subdue protestors. President Donald Trump, who has touted the pipeline as part of America’s energy policy, has subsequently expedited pipeline construction, which prompted a protest in Washington, D.C. in March 2017.

One recent issue involving Native Americans involves whether a provision in the Lanham Act enabling the United States to reject Patent and Trademark applications that “may disparage” persons or institutions violate the First Amendment. The Lanham Act has been the basis for rejecting some trademarks using Native-American names like “Redskins,” “Braves,” “Chiefs,” “Warriors," and the like.