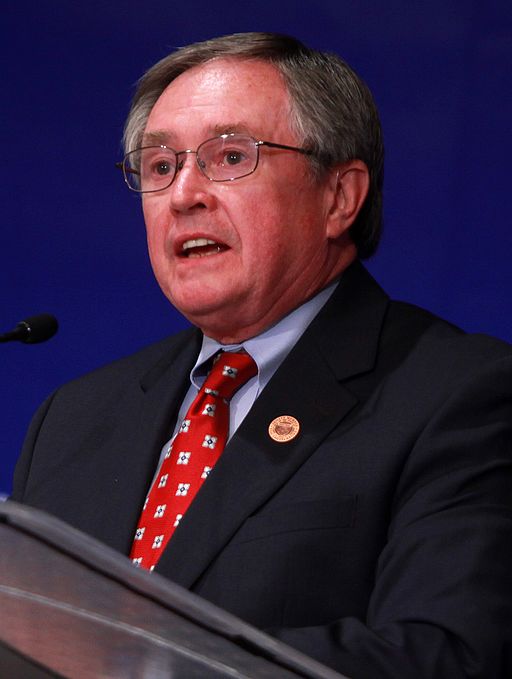 State Representative John McComish, center, was one of the plaintiffs in the Arizona case. (Photo by Gage Skidmore licensed under CC BY-SA 3.0)

The provision supplemented public monies originally given to candidates who accepted public financing once a privately financed opponent, and/or independent expenditures made on their behalf, exceeded this amount, essentially matching dollar per dollar up to a total limit of $64,437 in state funds per candidate.

Petitioners included five past and future Arizona candidates for office in Arizona and independent groups that spend money on candidates.

A substantial burden on speech v. state's interest in leveling the playing field

The federal district court had concluded that the equalizing payments constituted a substantial burden on speech and issued a permanent injunction against the law. The 9th U.S. Circuit Court of Appeals reversed, claiming that the law imposed only a minimum burden and was designed for the substantial interest of combatting corruption.

Chief Justice John Roberts wrote the 5-to-4 majority opinion. He cited the decision in Buckley v. Valeo (1976) to indicate that discussions of public issues are integral to the operations of government. Laws burdening such speech thus required a “compelling interest,” which is narrowly tailored to achieve this interest.

Roberts cited numerous precedents where the Court had invalidated laws that it thought imposed such burdens, including its recent decision in Citizens United v. FEC (2010), which had lifted the ban on corporate independent expenditures. The Court had also upheld limits on individual contributions and disclosure requirements.

Petitioners claimed that their speech is burdened in a similar way as a law that was struck down by the Court in Davis v. Federal Election Commission (2008).

In Davis, the Court struck down the so-called “Millionaire’s Amendment,” which allowed opponents of those who spent more than $350,000 of their own money on a campaign to accept higher contributions than were otherwise permitted. Roberts agreed.

Roberts reasoned that candidates who raised more money were penalized

As in Davis, Roberts found that the Arizona law imposed a “penalty” on candidates who raised more money. Indeed, the Arizona law is even more constitutionally problematic than the millionaires’ amendment because the state gave publicly funded candidates extra money without them having to raise it.

Moreover, privately funded expenditures might result in matching funds for several opponents, thus having a “multiplier effect.” Candidates about to trigger the law might decide to engage in less spending (and thus less speech) rather than doing so.

Roberts was unpersuaded by any of the rationales that Arizona offered. Rather than increasing speech, the Arizona subsidies simply increased the speech of publicly funded candidates, thus benefiting them at the expense of others.

Unlike disclosure requirements, this law results in “a cash windfall to his opponent.” Roberts indicated that the court record contained examples of how this could curtail spending by privately funded candidates.

Arizona said that it was seeking to level the playing field, but this is not a compelling state interest.  Roberts quoted Davis to say that “(l)eveling electoral opportunities means making and implementing judgments about which strengths should be permitted to contributed to the election,” which he identified as “a dangerous enterprise.”

As to efforts to combat corruption or the appearance of corruption, the state does not further this interest by reducing a candidate’s expenditures, especially of his own money, which the Court has said does not result in corruption. Roberts was not objecting to public funding per se but to a system that seeks to equalize expenditures on behalf of all candidates.

Justice Elena Kagan authored the dissenting opinion, which focused on Arizona’s attempts to eliminate public corruption. She did not think that Arizona’s law interfered with the desire “to foster a healthy, vibrant political system full of robust discussion and debate.”

She observed that about a third of the states had adopted public financing plans to combat corruption and that these plans sought a “sweet spot” between wasting public money by giving candidates too much or discouraging them from accepting money by giving them too little. An earlier Arizona law designed to limit campaign contributions had proven ineffective.

Rather than serving to cap speech, Kagan believed that the law “subsidizes and so produces more political speech.” It does so by enabling publicly funded candidates to respond to speech with additional speech that they might otherwise be unable to fund.

Those who refused to accept funds demonstrated chutzpah in challenging amounts distributed to those who would accept them. Kagan thought that “the very notion that additional speech constitutes a ‘burden’ is odd and unsettling.” To some degree, any system of public funding imposes a burden on those who do not accept it, but this does not make such laws unconstitutional. The provisions differ little from disclosure and disclaimer requirements that the Court has upheld in other cases and certainly do not exceed the burden of campaign contribution limits.

Kagan further disputed the relevance of the Davis decision to this case: “In Davis, the candidate’s expenditure triggered a discriminatory speech restriction, which Congress could not otherwise have imposed consistent with the First Amendment; by contrast, in this case, the candidate’s expenditure triggers a non-discriminatory speech subsidy, which all parties agree Arizona could have provided in the first instance.”  Moreover, the opinion in Davis specifically focused on this discriminatory impact.

Kagan further emphasized the importance of combatting corruption and its appearance, which was a clear goal of the Arizona law. Even if the law also had the purpose of equalizing the playing field, that would not undermine the importance of this interest.  The Arizona law “discriminated against no ideas and prevented no speech” and thus should be upheld.