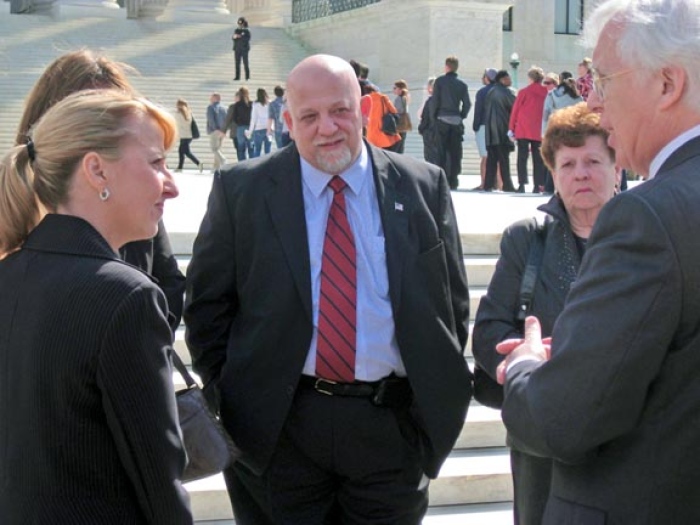 Charles Guarnieri was reinstated as police chief, but sued after the borough of Duryea issued what he said were retaliatory directives meant to punish him. In Borough of Duryea v. Guarnieri (2011), the Supreme Court addressed the issue of speech and petition by public employees under the First Amendment. The Court said petitions should involve a public concern. (Photo courtesy of The Citizens' Voice.)

The U.S. Supreme Court decision in Borough of Duryea v. Guarnieri, 564 U.S. ____ (2011), addressed the issue of speech and petitioning by public employees.

After the borough of Duryea, Pennsylvania, fired its police chief, Charles Guarnieri, he filed a union grievance that led to his reinstatement. The borough council subsequently issued him 11 directives, including prohibitions against working overtime or using his police car for unofficial business. Guarnieri filed and won a lawsuit that alleged that the council had issued these directives in retaliation for his first union grievance, which he argued was a petition protected by the First Amendment Petition Clause and by 42 U.S.C. Sec 1983.

The court had instructed jurors that Guarnieri’s lawsuit and grievances were protected by the Constitution and that it could find the council liable if it found an adequate connection between these actions and the alleged retaliation.

The borough appealed on the basis that Guarnieri’s grievance did not address matters of public concern but merely his own private employment concerns. Although other circuit courts had ruled that such retaliation was only invalid if it concerned a matter of public concern, the 3rd U.S. Circuit Court of Appeals had ruled that “a public employee who has petitioned the government through a formal mechanism such as the filing of a lawsuit or grievance is protected under the Petition Clause from retaliation for that activity, even if the petition concerns a matter of solely private concern.”

Justice Anthony Kennedy authored the majority decision on behalf of seven justices. Citing the decision in Connick v. Myers (1983), he noted that cases brought under the Free Speech clause of the First Amendment involving public employees required individuals to show that they were addressing matters of public concern.

In Pickering v. Board of Education (1968), the Court had ruled that courts should balance employee speech against “the interest of the State, as an employer, in promoting the efficiency of the public services it performs through its employees.”

Guarnieri had brought his suit under the Petition Clause of the First Amendment, and the case was litigated on the basis that this clause covers lawsuits. Under the 3rd Circuit’s interpretation, the Court would apply different standards to the Free Speech and Petition Clauses, but although they are not identical in “their purpose and effect,” Kennedy recognized that they “share substantial common ground.”

Thomas v. Collins (1945) recognized that they were “cognate rights.”  Similar interpretation of the two clauses are dictated by “the extensive common ground in the definition and delineation of these rights.” Moreover, “Petitions, no less than speech, can interfere with the efficient and effective operation of government.”  This is particularly true of a lawsuit that demands a response and may be particularly disruptive.

Kennedy feared that “[u]nrestrained application of the Petition Clause in the context of government employment would subject a wide range of government operations to invasive judicial superintendence.”

In this case, he noted that Guarnieri’s attorney had “invited the jury to review myriad details of government decisionmaking,” and had even made an emotional appeal on behalf of Guarnieri’s dog.

Acknowledging that many petitions to Colonial legislatures involved “matters of purely private concern,” Kennedy believed that such petitions “assume an added dimension when they seek to advance political, social, or other ideas of interest to the community as a whole.”

Kennedy argued that “[t]he framework used to govern Speech Clause claims by public employees, when applied to the Petition Clause, will protect both the interests of the government and the First Amendment Right.” He accordingly remanded the case to see how Guarnieri’s complaint would fare using this standard.

Other justices doubted lawsuits could be classified as petitions

Justice Clarence Thomas wrote a concurring opinion doubting that lawsuits could properly be classified as “petitions” under the First Amendment. He further doubted the wisdom of importing the public concern doctrine of Connick v. Myers into the Petition Clause. Even in cases where public employees petition the government in its capacity as sovereign (rather than employer), Thomas would still balance employee rights against the government’s need for efficient management.

Justice Antonin Scalia’s partial concurrence and partial dissent took issue with the Court’s view that a lawsuit was a form of petition, which he thought had never been properly decided by the Court.

Moreover, he thought that the phrase historically was “directed to the executive and legislative branches of government, not to the courts.” Scalia also thought it was unwise to conflate two clauses, which the Founders chose to list as separate rights. He said that “[r]ather than shoehorning the ‘public concern’ doctrine into a Clause where it does not fit, we should hold that the Petition Clause protects public employees against retaliation for filing petitions unless those petitions are addressed to the government in its capacity as the petitioners’ employer, rather than its capacity as their sovereign.”

Scalia thought that the Court should reverse that part of the 3rd Circuit opinion upholding Guarnieri’s claim of retaliation for filing his union grievance (a quintessential employee matter) but affirm his claim filed under 42 U.S.C. Sec 1983.