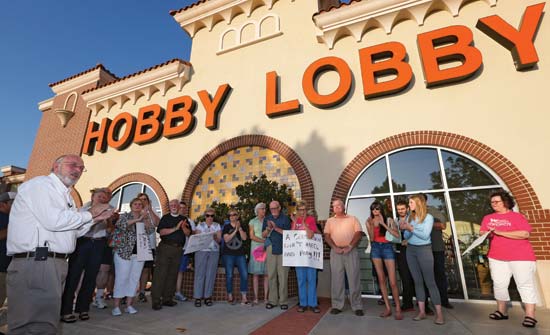 Rev. Bruce Prescott, left, leads a vigil outside a Hobby Lobby store in Edmond, Okla., Monday, June 30, 2014, in opposition to Burwell v. Hobby Lobby Stores, Inc. (2014) in which the Court said that some companies like the Oklahoma-based Hobby Lobby chain of arts-and-craft stores can avoid the contraceptives requirement in President Barack Obama's health care overhaul, if they have religious objections. (AP Photo/Sue Ogrocki, used with permission from the Associated Press)

In Burwell v. Hobby Lobby Stores, Inc., 573 U.S. ____ (2014), the U.S. Supreme Court had to decide whether the Religious Freedom Restoration Act of 1993 (RFRA) permitted the Department of Health and Human Services (HHS) to require that three closely held corporations provide coverage under the Patient Protection and Affordable Care Act of 2010 (ACA) for forms of contraceptives that violated the owners’ beliefs against the use of abortifacients.

Justice Sonia Sotomayor had denied a preliminary injunction against the law in Hobby Lobby v. Sebelius (2012). But in this case, Justice Samuel Alito wrote the decision for the 5-to-4 majority, exempting the closely held corporations from this part of the law.

The cases were brought by owners of the Conestoga Wood Specialties (owned by Mennonites), and the owners of Hobby Lobby stores, who had similar religious convictions.

The Religious Freedom Restoration Act was adopted in the aftermath of the Court’s decision in Employment Division v. Smith (1990). The law prohibited government from substantially burdening an individual’s religious exercise unless it could show that it furthered a compelling state interest and used the least restrictive means in so doing.

The Patient Protection and Affordable Care Act, as applied by the Health Resources and Services Administration (HRSA), required businesses to provide contraception coverage for methods, including IUDs and morning-after pills, that the businesses considered to be abortifacients. If businesses provided health insurance (as these businesses did), the ACA required they must supply the full range of covered services or pay hefty fines.

Court said corporations were persons under the law

Since the Religious Freedom Restoration Act  applied to persons, the Court had to decide whether closely held corporations were legally so classified. Alito ruled that corporations were persons under the law, and that this legal fiction was designed to protect the rights of individuals.

Other cases had already established similar rights for nonprofit corporations, and Alito could see no reason under the law to interpret the law differently for the two. Alito did think it was appropriate to distinguish closely held corporations from publicly traded corporations without similar religious foundations and objectives.

Alito believed that the regulations at issue did substantially burden the exercise of religion of the owners of the closely held corporations, who faced the prospect of either providing coverage that violated their owners’ consciences or paying heavy fines. Alito did not think it was the business of the Court to question the sincerity or the content of the owner’s beliefs.

In examining whether the regulations furthered a compelling governmental interest, Alito cited the government’s desire to promote public health and gender equality, but noted that the government had provided exceptions for:

Alito denied that exempting coverage in this case would necessarily lead to exempting those who opposed immunizations or who favored racial discrimination.  He further denied that the case was equivalent to requiring everyone to contribute to Social Security.

In a brief concurring opinion, Justice Anthony Kennedy denied that the decision had the broad implications that the dissenters attributed to it.

Ginsburg believed that the majority had interpreted RFRA too broadly in in contradiction to the Smith opinion. Ginsburg did not believe that the law should be extended to cover profit-making corporations, which she considered to be very different from churches.

She determined that the link between an employer’s provision of birth-control coverage and the decision of employees to use it “is too attenuated to rank as substantial.”

Moreover, she viewed the interests in providing such coverage to be “concrete, specific, and demonstrated by a wealth of empirical evidence.”

She also rejected Alito’s least restrictive means analysis and feared that the decision would have vast implications for a broad variety of religious beliefs. She believed the decision in United States v. Lee (1952), requiring participation in Social Security despite religious beliefs, was controlling.

Justices Breyer and Kagan did not join the part of the Ginsburg’s decision that would exclude nonprofit corporations or their owners from bringing claims under RFRA.