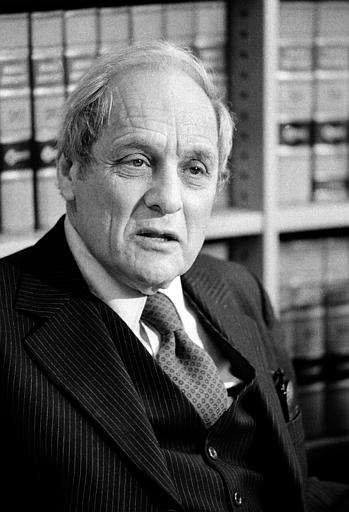 Leonard Boudin argued many First Amendment cases before the Supreme Court. He was also a prominent civil liberties attorney, and among his clients were Daniel Ellsberg, who was charged in connection with the theft of the Pentagon Papers.

A native of Brooklyn, New York, Boudin obtained his undergraduate degree from City College and his law degree from St. John’s Law School. Upon his graduation from the latter in 1936, Boudin practiced law with his uncle, Louis Boudin, a well-known constitutional lawyer and socialist. In the late 1940s, Boudin formed a law firm with another young lawyer, Victor Rabinowitz, and the two handled many high-profile labor law and then civil liberties cases.

Through the years, Boudin represented many celebrities and controversial clients, including actor Paul Robeson, pediatrician Benjamin Spock, and former Teamsters leader Jimmy Hoffa. Boudin also represented Daniel Ellsberg, who was charged in connection with the theft of the Pentagon Papers.

His son, Michael Boudin, is chief judge of the First Circuit Court of Appeals, and his daughter, Kathy Boudin, is in a New York prison for her participation in the 1981 armed robbery of an armored truck.