By Matthew M. Caverly
Other articles in Presidents 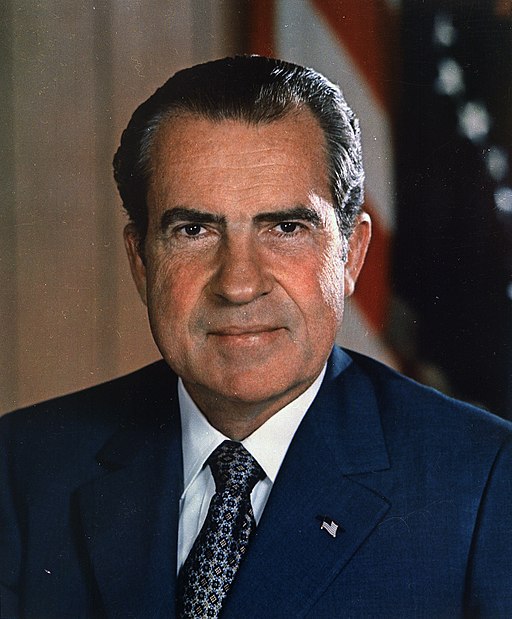 Richard Milhous Nixon (1913–1994), the 37th president of the United States, served from January 20, 1969, to his resignation on August 9, 1974 — a tumultuous period marked by ongoing civil rights upheavals, protests against the Vietnam War, and executive wrongdoing and investigations. For many observers, Nixon’s conduct during this time typified executive abuse of power, even at times threatening the freedoms of speech, press, and political association.

Nixon, a World War II Navy veteran who was born in California, had a long political career that included service in both the U.S. House of Representatives (1947–1950) and U.S. Senate (1950–1953). He also served as President Dwight D. Eisenhower’s vice president (1953–1961). During his service in the House, Nixon helped to expose State Department official Alger Hiss as a Soviet spy. Playing off the fears generated by McCarthyism, he moved to the Senate by painting his opponents as “pink.”

Nixon lost the presidential election of 1960 to Democrat John F. Kennedy, and he failed to win the governorship of California in 1962. He then resumed practicing law (he had graduated from Duke Law School) and contributed to First Amendment jurisprudence by arguing for the Hill family before the Supreme Court in Time, Inc. v. Hill (1967).

Although the Hill family had won damages in a lower court, the Supreme Court rejected the idea that a Life magazine article about the hostage ordeal endured by the family portrayed it in a “false light” for which it should be able to sue.

In 1968 Nixon once again entered politics and won the presidential election. He served one and a half terms before resigning in the wake of the Watergate scandal.

As president, he is remembered positively for his many foreign policy accomplishments, including ending U.S. combat in the Vietnam War, opening diplomatic relations with China, and establishing détente with the Soviet Union.

Nixon seemed to operate above the law in domestic policy

In the domestic policy arena, however, Nixon is reviled for his perceived and real excesses, some of which were tied to his attempts to maintain secrecy in matters related to foreign affairs.

Nixon’s administration seemed to operate above the law. Revelations about the use of both the Central Intelligence Agency (CIA) and the Federal Bureau of Investigation (FBI) to infiltrate and spy on social activist groups, ranging from civil rights organizations to consumer protection groups and especially the anti-war movement, threatened freedom of association and contributed to the perception of Nixon as Machiavellian.

The president’s “enemies lists” of civil rights and anti-war leaders, as well as liberal activists, politicians, journalists, and fund-raisers, enhanced his image as an officeholder who personalized his opposition and justified use of the power of his office to counteract their efforts.

In June 1971, the Nixon administration began a campaign to discredit RAND analyst Daniel Ellsberg, who had leaked to the New York Times a secret history of the Vietnam War (known as the Pentagon Papers) that contained admissions of lies and cover-ups about the conduct of the war. Among other things, administration operatives broke into the office of Daniel Ellsberg’s psychiatrist in California to retrieve damaging information on Ellsberg. In New York Times Co. v. United States (1971), the Supreme Court held that the government did not have the right to invoke prior restraint on the New York Times and the Washington Post for publishing excerpts of the Pentagon Papers.

The problems afflicting the Nixon administration extended to campaign practices as well. Irregularities, especially in fund raising in the 1968 presidential election, ultimately led to congressional passage of the Federal Election Campaign Act (FECA) in 1971.

Nevertheless, the 1972 election was rife with corruption, which culminated in what came to be known as the Watergate scandal, but included earlier wrongdoing.

Two well-known efforts to subvert the political process were the creation and operation of the “plumbers” unit, a group dedicated to “plugging leaks” within the administration, and of the Committee to Re-Elect the President (CREEP), which engaged in “dirty tricks” to stymie the political and personal opposition to Nixon and his administration. One such trick was the break-in by members of CREEP at the 1972 national headquarters of the Democratic Party in Washington’s Watergate Hotel; the burglars were seeking campaign intelligence.

During the hearings of the Senate Watergate Committee, a special committee convened to investigate the Watergate burglary and the surrounding scandals, the President lost yet another court decision in which the Supreme Court upheld a 1974 ruling in United States v. Nixon that the president had to surrender tapes of his personal conversations to the special prosecutor appointed to investigate administration activities.

These tapes contained the “smoking gun” that revealed Nixon had orchestrated the Watergate cover-up. To avoid certain impeachment by the House and conviction by the Senate, the president resigned from office.

This article was originally published in 2009. Matthew M Caverly is a lecturer at Middle Georgia State University. He teaches courses in American civics including an extensive section on the "1st Amendment Freedoms." Caverly received his Ph. D. in political science from the University of Florida.