By Kenneth J. Knirck
Other articles in Publishers or Subjects of Attempted Censorship 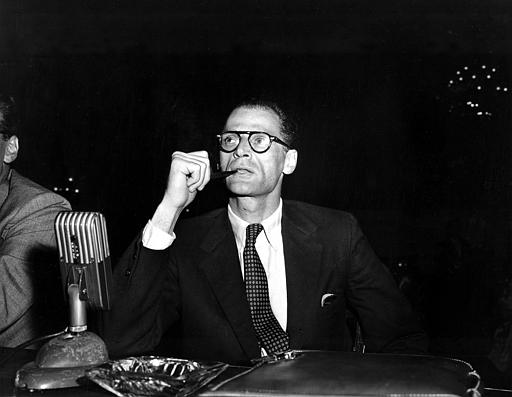 Arthur A. Miller (1915–2005) was one of the most talented and influential American playwrights of the post–World War II era.

In his work, he displayed an ability to tap into the American zeitgeist and write characters and plots that captured the social and moral uncertainty of the era. Many of his plays examined the plight of the working class and illustrated the pursuit of false values that led to the destruction of American families.

His veiled criticisms of McCarthyism not only produced an award-winning play but eventually led to a congressional investigation, where he stood by his First Amendment rights of association.

Born in Manhattan to Jewish parents whose business failed during the Great Depression, Miller earned his own way to the University of Michigan. While there, he wrote several award-winning plays and edited the university’s student newspaper. He graduated with a degree in English in 1938.

Miller’s college successes were followed by failure in his professional debut on Broadway.

The Man Who Had All the Luck (1944) was a disaster and closed after only four performances. Miller was devastated and vowed never to write another play. But he came back with the award-winning All My Sons (1947), a play about a war-profiteering businessman who sells defective airplane parts to the United States during World War II.

Miller’s writings were filled with cultural and social commentary, much of which he mirrored in his personal life.

In his most successful play, Death of a Salesman (1949), which won a Pulitzer Prize, Miller’s lead character is Willy Loman, a downtrodden businessman whose obsession with success and unsuccessful climb up the corporate ladder leads to a crisis of conscience.

In 1953 Miller wrote The Crucible, which depicted the mass hysteria of the 17th century witch trials in Salem, Massachusetts. This play was a thinly veiled commentary about Miller’s disdain of the communist witch hunts during the 1950s led by Sen. Joseph McCarthy.

During this period dozens of writers, actors, and directors were blacklisted in Hollywood and were unable to work in the entertainment business. Miller left Hollywood and concentrated his writing efforts on Broadway, where the effects of blacklisting were minimal.

In 1956 the House Un-American Activities Committee subpoenaed Miller to testify about communist sympathizers in the entertainment industry.

Miller refused to name people whom he knew to be “fellow travelers.” He was cited for contempt of Congress and was sentenced to jail, but his conviction was later overturned.

This article was originally published in 2009 while Kenneth J. Knirck was a graduate student at California State University, Chico.