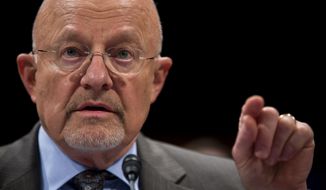 The 5-4 U.S. Supreme Court decision in Clapper v. Amnesty International, 568 U.S. ____ (2013) deals chiefly with issues of legal standing. One ground that the petitioners advanced for such standing centered on the possible “chilling effect” that wiretaps conducted under §1881a of the Foreign Intelligence Surveillance Act (FISA) of 1978 might have on their First Amendment Rights.

FISA provided the Attorney General and the Director of National Intelligence (James R. Clapper) with authority to get approval to conduct surveillance of foreign powers or agents for periods of up to one year.  The petitioners were lawyers, human rights workers, and journalists who sought an injunction against the law, which they thought violated their First and Fourth Amendment (protects against unreasonable searches and seizures) rights as well as separation of powers.

Petitioners, who had numerous overseas contacts, argued that there was “an objectively reasonable likelihood” that the government would acquire their communications, and that this risk had led them to pursue costly alternatives like foreign travel rather than phone calls.

The federal district court had dismissed the case for lack of standing, but the Second U.S. Circuit Court of Appeals had reversed this ruling. Justice Samuel Alito wrote the decision for five members of the Court, and Justice Stephen Breyer filed a dissent joined by Justices Ruth Bader Ginsburg, Sonia Sotomayor, and Elena Kagan.

Court said petitioners lacked standing and could not prove harm

Alito observed that the doctrine of standing was designed to preserve separation of powers by preventing judicial usurpation.  It requires individuals to show concrete injury based in this case on “an objectively reasonable likelihood that their communications with their foreign contacts will be intercepted under §1881a at some point in the future.”

He rejected all five of their arguments as “highly attenuated.”

In Laird v. Tatum (1972), the Court had rejected similar claims that an army surveillance program, in and of itself, had a “chilling effect” on speech.  He further cited Meese v. Keene (1987) for support and rejected the idea that the Court had to accept standing in order for individuals to challenge the law and pointed out several other avenues by which he thought this might be done.

Dissent argued that plaintiffs had standing to challenge wiretap law

Breyer’s dissent did not think the attempt to establish standing was based on mere speculation and questioned the majority’s insistence that respondents proved that interceptions were “actual or imminent.”

Breyer concluded that “certainty is not, and never has been, the touchstone of standing,” and that courts have previously accepted standing in cases “aimed at preventing future activities that are reasonably likely or highly likely, but not absolutely certain, to take place.”  Moreover, it has accepted standing in cases where the injuries were less likely than in this case.  Breyer declined, however, specifically to address the constitutional claims raised in this case.