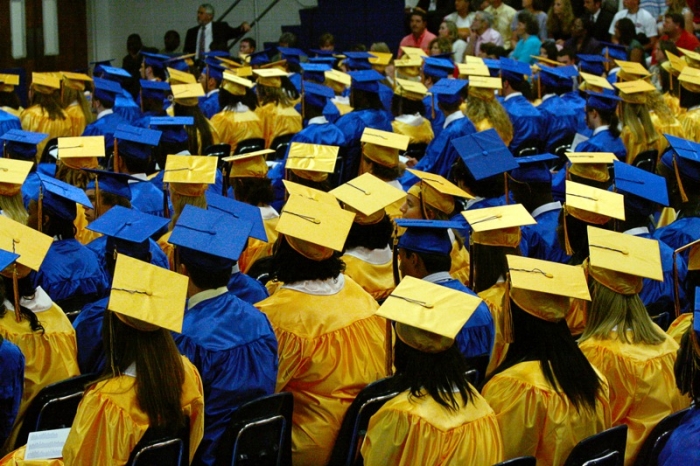 The Ninth Circuit Court of Appeals held that it was reasonable for school officials to limit religious-themed music at a high school graduation where there was a captive audience. The U.S. Supreme Court declined to review the case. (Photo by Chris Monkus, Flickr, CC BY-SA 2.0)

In Nurre v. Whitehead, the U.S. Supreme Court, 559 U.S. 1025 (2010), declined to review an appeal filed by an Everett, Washington-based high school student, who alleged her free-speech rights were violated when school officials refused to allow band students to perform an instrumental version of “Ave Marie” at high school graduation. Justice Samuel Alito dissented from the denial of certiorari and wrote an opinion explaining his decision.

Kathryn Nurre was a high school student and a member of the band’s wind ensemble. The students selected “Ave Marie” as their song of choice. Ave Marie is Latin for Hail Mary. The school principal feared that the song’s religious overtones would upset some members of the community, as a religious-themed piece the year before had led to complaints. The principal rejected the student’s choice, and they performed another more secular song at the graduation.

Nurre sued school officials, claiming they had violated her free-speech rights and expressed hostility toward religion in violation of the Establishment Clause. She alleged that school officials had created a limited public forum by allowing students to choose the music at their graduation. A federal district court granted school officials and the school district summary judgment.

A divided three-judge panel of the Ninth U.S. Circuit Court of Appeals agreed. The majority reasoned that purely instrumental music was a form of speech under the First Amendment. However, the Ninth Circuit held that it was reasonable for school officials to limit religious-themed music at a high school graduation where there was a captive audience. The majority also determined that school officials did not show any hostility toward religion in violation of the Establishment Clause. A dissenting judge on the Ninth Circuit panel wrote that there was a free-speech problem with the decision but would have concurred with the judgment based on qualified immunity.

Nurre then petitioned for Supreme Court review. The Court denied certiorari. Justice Alito explained why he voted to review the case. “But when a public school purports to allow students to express themselves, it must respect the students' free speech rights,” Alito wrote. “School administrators may not behave like puppeteers who create the illusion that students are engaging in personal expression when in fact the school administration is pulling the strings.”