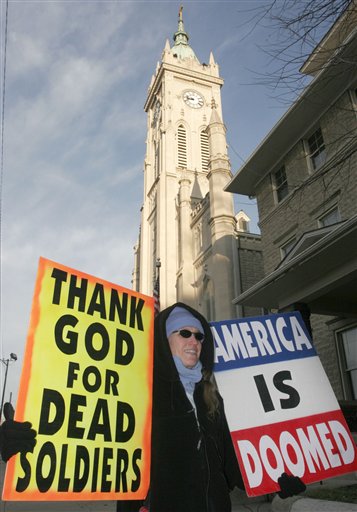 The Kansas-based Westboro Baptist Church regularly picketed military funerals to advance their views that God was punishing the United States for its toleration of homosexuality. The family of a slain Marine sued after church members picketed their son's funeral and was awarded a total of $5 million in damages. The Supreme Court, however, upheld the church's First Amendment free-speech rights. In this 2006 photo, Westboro Baptist Church member Shirley Phelps-Roper holds signs in front of the St. Julie Billiart Catholic Church before a funeral for Army Pfc. Adam Shepherd in Hamilton, Ohio.  (AP Photo/David Kohl, used with permission from the Associated Press)

In Snyder v. Phelps, 562 U.S. 443 (2011), the U.S. Supreme Court ruled 8-1 that the First Amendment prohibited the imposition of civil liability upon a church and its members who picketed the funeral of a slain Marine. The Court reasoned that the highly offensive expression was speech on a matter of public concern, uttered peacefully and lawfully on a public street.

The Kansas-based Westboro Baptist Church and its founder Fred Phelps regularly picketed at military funerals to advance their views that God punished the United States for its toleration and promotion of homosexuality by killing the country’s soldiers.

Phelps, two of his daughters, and four of his grandchildren picketed at the funeral of slain Marine Matthew Snyder, killed in the line of duty in Iraq. The Phelps clan conducted themselves peacefully and pursuant to police orders. However, their signs included messages, such as “God Hates Fags,” “Thank God for IEDs,” and “America is Doomed.”

Albert Snyder, the father of Matthew, sued the Westboro Baptist Church, Phelps, and his daughters for defamation, publicity given to private life, intentional infliction of emotional distress, intrusion upon seclusion, and civil conspiracy.

A federal district court granted summary judgment to defamation and publicity given to private life. The other three claims proceeded to a jury, which awarded Snyder $2.9 million in compensatory damages and $8 million in punitive damages. The federal district court judge remitted the punitive damage award to $2.1 million for a total of $5 million.

Phelps appealed to the Fourth U.S. Circuit Court of Appeals, which reversed on First Amendment grounds. The appeals court determined that the Phelps’ expression was speech on a matter of public concern.

Snyder appealed to the U.S. Supreme Court, which affirmed the appeals court. Writing for the majority, Chief Justice John G. Roberts, Jr. emphasized that the defendants’ speech touched on matters of public concern or importance. He also emphasized that the protestors conducted themselves peacefully on public streets pursuant to police directives.

Addressing the intentional infliction of emotional distress claim, Roberts focused on the requirement of outrageousness. He relied on the Court’s decision in Hustler Magazine, Inc. v. Falwell (1988) for the principle that outrageousness is a “highly malleable” standard that is too subjective when applied to speech on a matter of public concern.

Court noted that church members stayed 'well away' from funeral

Roberts next addressed the intrusion claim, a form of invasion of privacy. Snyder had argued that he was a captive audience to the offensive and repugnant messages of the defendants.  However, Roberts noted that “Westboro stayed well away from the funeral” and that the captive audience doctrine generally applies only to protect the privacy rights of homeowners. He also rejected the civil conspiracy claim.

Roberts concluded with language that has become First Amendment lore:

“Speech is powerful. It can stir people to action, move them to tears of both joy and sorrow, and – as it did here – inflict great pain.  On the facts before us, we cannot react to that pain by punishing the speaker. As a Nation we have chosen a different course – to protect even hurtful speech on public issues to ensure that we do not stifle public debate.”

Justice Stephen Breyer wrote a concurring opinion.  He acknowledged that a state sometimes can regulate picketing on matters of public concern. However, he balanced the First Amendment values and state-protected interests to reach the same result.

Justice Samuel Alito filed a solitary dissent. “Our profound national commitment to free and open debate is not a license for the vicious verbal assault that occurred in this case,” he wrote.