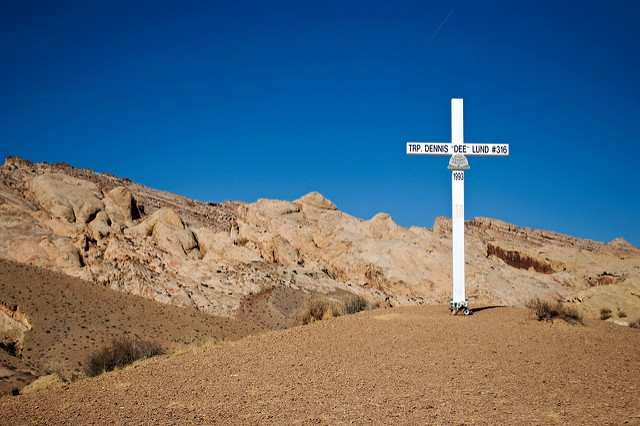 The Utah Highway Patrol had erected white crosses like this one along highways to memorialize slain police officers until the Tenth Circuit Court of Appeals said the practice could be viewed as an endorsement of religion in violation of the First Amendment's religious establishment clause. The highway patrol appealed the decision to the U.S. Supreme Court, who declined to hear the case. (Photo by Jessica Petersen, via Flicker, CC BY-NC 2.0)

However, Justice Clarence Thomas wrote an opinion, dissenting from the denial of certiorari expressing concern over an Establishment Clause jurisprudence he termed “nebulous” and described as “in shambles.”

In 1998, the Utah Highway Patrol began posting white crosses on roadsides.  American Atheists, Inc. and some of its members sued several state officials, contending that these cross memorials posted on government property violated the Establishment Clause.

After the Utah Highway Association unsuccessfully petitioned for en banc, or full panel review, they petitioned for review by the U.S. Supreme Court.  As mentioned, the Court denied review, but Justice Thomas explained in a separate opinion why the Court should have taken the case.

“Our jurisprudence provides no principled basis by which a lower court could discern whether Lemon/endorsement, or some other test, should apply in Establishment Clause,” Thomas wrote.  “Some of our cases have simply ignored the Lemon or Lemon/endorsement formulations.”

He also wrote that both the Lemon test and the endorsement test were “utterly indeterminate” and caused courts to reach “inconsistent results.”  He noted that five of his sitting colleagues had criticized either test in prior opinions.

Thomas believed the Court needed to review the case to “clean up our mess.”