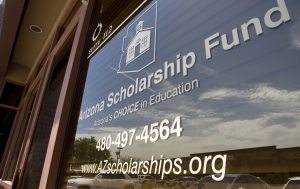 A group of Arizona taxpayers objected to this system of tax credits on the basis of the Establishment Clause of the First Amendment, which provides for separation between church and state. The taxpayers contended that much of the tax credits would be for contributions to religious schools. The Supreme Court upheld the program. This photo shows an organization taxpayers could donate to in order to receive the tax credit. (Photo courtesy of East Valley Tribune in Tempe, Arizona)

In Arizona Christian School Tuition Organization v. Winn, 563 U.S. 125 (2011), a sharply divided (5-4) U.S. Supreme Court ruled that state residents did not have standing as taxpayers to challenge a program that provided tax credits for contributions to school-tuition organizations.

A group of Arizona taxpayers objected to this system of tax credits on the basis of the Establishment Clause, which provides for separation between church and state. The taxpayers contended that much of the tax credits would be for contributions to religious schools.

Court said taxpayers did not have standing to challenge system

Writing for the majority, Justice Anthony Kennedy reiterated the general rule from Massachusetts v. Mellon (1923), which provided that one’s status as a taxpayer generally did not grant one standing to challenge a law.

However, the challengers invoked the Court’s decision in Flast v. Cohen (1968), where the Court did find that taxpayers had standing to challenge a government spending program as violative of the Establishment Clause.

But Kennedy distinguished Flast as a case involving government spending, rather than a tax-credit program. “The distinction between governmental expenditures and tax credits refutes respondents' assertion of standing,” wrote Kennedy. “When Arizona taxpayers choose to contribute to STOs, they spend their own money, not money the State has collected from respondents or from other taxpayers.”

Justice Antonin Scalia, joined by Justice Clarence Thomas, wrote a concurring opinion, emphasizing that Flast “is an anomaly in our jurisprudence.”

Justice Elena Kagan authored the opinion for the Court’s four dissenters. She disagreed with the majority that Flast was distinguishable. “This novel distinction in standing law between appropriations and tax expenditures has as little basis in principle as it has in our precedent,” she wrote. “Cash grants and targeted tax breaks are means of accomplishing the same government objective — to provide financial support to select individuals or organizations.”

Many legal commentators agreed with Kagan.

For example, two scholars wrote: “The Court's distinction between the spending program in Flast and the tax credit in Winn is also not credible. There is no principled difference between the injuries a taxpayer incurs when she is required to subsidize religious schools and those she sustains when she is forced to subsidize the credits given to others to support religious schools.” (Marshall and Nichol, 252). However, Professor Nicole Garnett termed the decision a victory for “educational pluralism.” (Garnett, 31).