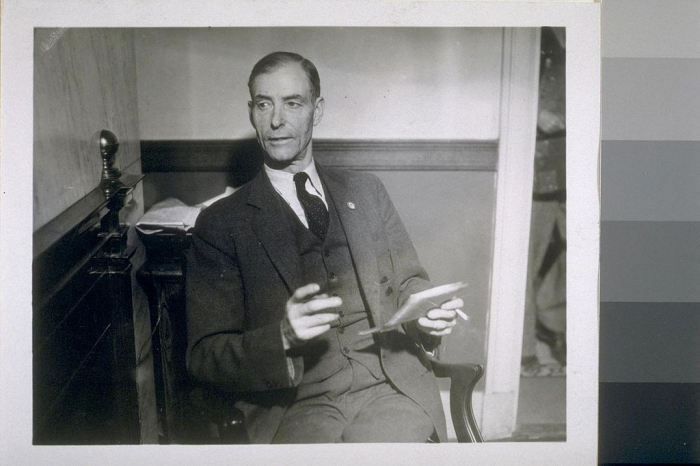 Harry Bridges, in a photo taken by the San Francisco News-Call Bulletin, as chairman of the strike committee during the 1934 West Coast Longshoremen's Strike. In Bridges v. Wixon, 326 U.S. 135 (1945), the U.S. Supreme Court ruled that the U.S. attorney general could not deport Bridges, an immigrant from Australia who had entered the United States in 1920, for his affiliation with the Communist Party. The Court said legal aliens had First Amendment rights. (Public domain)

In Bridges v. Wixon, 326 U.S. 135 (1945), the U.S. Supreme Court reversed a decision by the 9th U.S. Circuit Court of Appeals denying a writ of habeas corpus to Harry Bridges. The Court ruled that the U.S. attorney general could not deport Bridges, an immigrant from Australia who had entered the United States in 1920, for his affiliation with the Communist Party.

An initial deportation attempt had been blocked when the government could not prove that Bridges had been a past member of the Communist Party. Congress had responded by adopting a statute permitting deportation for individuals affiliated with the Communist Party. The attorney general marshaled evidence that Bridges had such affiliations in connection with his work as a labor organizer with the Marine Workers’ Industrial Union.

Justice William O. Douglas wrote the Court’s majority opinion in which he deferred ruling on potential First Amendment issues on the basis that those investigating Bridges had denied him adequate due process by including hearsay and other questionable evidence.

In a statement that continues to be relevant to the rights of aliens, however, Douglas observed that “Though deportation is not technically a criminal proceeding, it visits a great hardship on the individual and deprives him of the right to stay and live and work in this land of freedom. That deportation is a penalty – at times a most serious one – cannot be doubted. Meticulous care must be exercised lest the procedure by which he is deprived of that liberty not meet the essential standards of fairness.”

Justice Frank Murphy wrote a concurring opinion that further addressed the First Amendment rights of aliens. Distinguishing the rights of those seeking entry from those who are in the country, Murphy argued that:

"… once an alien lawfully enters and resides in this country he becomes invested with the rights guaranteed by the Constitution to all people within our borders. Such rights include those protected by the First and Fifth Amendments and by the due process clause of the Fourteenth Amendment. None of these provisions acknowledges any distinctions between citizens and resident aliens. They extend their inalienable privileges to all 'persons' and guard against any encroachment of those rights by federal or state authority. Indeed, this Court has previously and expressly recognized that Harry Bridges, the alien, possesses the right to free speech and free press and that the Constitution will defend him in the exercise of that right." (p. 161).

Court said this deportation was illegal

Murphy reiterated that the Bill of Rights applied both to citizens and aliens: “It protects them as long as they reside within the boundaries of our land. It protects them in the exercise of the great individuals rights necessary to a sound political and economic democracy. Neither injunction, fine, imprisonment nor deportation can be utilized to restrict or prevent the exercise of intellectual freedom” (p. 165).

Chief Justice Harlan Fiske Stone wrote a dissenting opinion, joined by Justice Owen Roberts and Felix Frankfurter, in which they deferred to what they considered to be Congress’s “plenary power” over issues of deportation.

The Supreme Court has yet to sort out the rights of aliens residing legally or illegally in the United States (Kagan 2016).