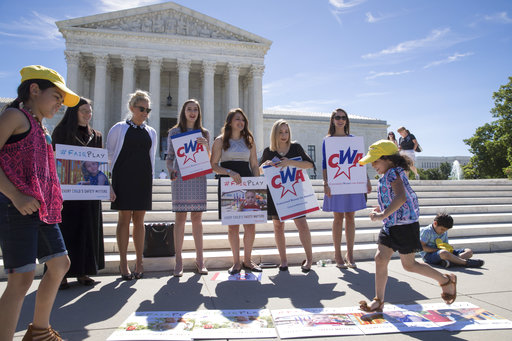 On the final day for rulings at the Supreme Court, a group from the Concerned Women for America, a Christian women's activist group, shows their support as the justices ruled 7-2 for Trinity Lutheran Church of Columbia, Mo., that churches have the same right as other charitable groups to seek state money for new playground surfaces and other non-religious needs in Trinity Lutheran Church of Columbia, Inc. v. Comer on Monday, June 26, 2017, in Washington. (AP Photo/J. Scott Applewhite, used with permission from the Associated Press)

In Trinity Lutheran Church of Columbia, Inc. v. Comer, 582 U.S. ____ (2017), the U.S. Supreme Court relied on the free exercise clause of the First Amendment in order to rule that Missouri had improperly excluded the Trinity Lutheran Church Child Learning Center from a grant that would have enabled it to replace the pea gravel on its playground with a pour-in-place rubber surface provided under its Scrap Tire Program.

In writing the Court’s 7-2 decision, Chief Justice John Roberts observed that the free exercise clause was designed to shield religious institutions from discrimination and that any such discrimination required strict judicial scrutiny. Roberts relied on Church of Lukumi Babalu Aye, Inc. v. Hialeah (1993) [invalidating laws that affected animal sacrifice], Everson v. Board of Education (1947) [public provision of bus transportation to parochial schools], and McDaniel v. Paty (1978) [no exclusion of pastors from state constitutional provisions], to establish this principle. He further distinguished such cases from those that involved free exercise claims that violated state laws.

Roberts viewed the law as presenting the day care center with the choice of either participating in a governmental program or remaining a religious institution. He further argued that Trinity Lutheran was “not claiming any entitlement to a subsidy” but simply asserting “a right to participate in a government benefit program without having to disavow its religious character. Roberts further distinguished this case from Locke v. Davey (2004), where the Court had permitted a state to exempt a ministerial student from state scholarship funds. The state’s interest in the case at hand was not significant enough to justify its discriminatory policy.

Justices Clarence Thomas and Neil Gorsuch wrote concurring opinions in which they suggested greater reservations about the decision in Locke. Gorsuch specifically observed that the free exercise clause “guarantees the free exercise of religion, not just the right to inward belief (or status).”  Justice Stephen Breyer’s concurring decision further drew on parallels between this decision and that in Everson.

Dissenters thought the state should avoid establishment of religion

Justice Sonia Sotomayor, joined by Justice Ruth Bader Ginsburg, authored a dissent in which she emphasized past decisions denying direct aid to churches and church-related institutions. She reviewed a host of early state laws, which had over time rejected such aid. Sotomayor thought that accommodating the desire to avoid the establishment of religion provided the compelling interest that the majority sought. She further argued that this was more consistent with the decision in Locke v. Davey.

This decision may signal a retreat from the Court’s general reluctance to interpret the free exercise clause independently of other First Amendment rights and may pose a challenge to state Blaine laws.