By John R. Vile (Updated November 2018)
Other articles in Judges and Justices 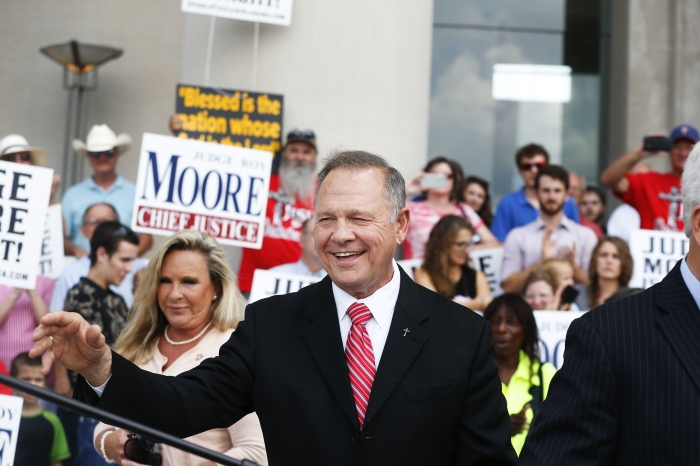 Alabama Chief Justice Roy Moore speaks to the media during a news conference in Montgomery, Alabama in 2016. He was accused of breaking judicial ethics during the fight over same-sex marriage in the state. Moore has earned notoriety for his conservative stances surrounding religious liberty. (AP Photo/Brynn Anderson, used with permission from the Associated Press)

Moore was controversial as chief justice of the Alabama Supreme Court

He first served from January 14, 2001, through November 13, 2003, after which he was removed by the Alabama Court of the Judiciary after refusing a federal court order to remove a giant granite monument of the Ten Commandments, which he had installed in the rotunda of the judicial building in Montgomery.

After being re-elected to the office, he served from January 15, 2013 to April 26, 2017, at which time he was suspended for instructing probate judges to refuse to issue licenses for same-sex marriages after the U.S. Supreme Court invalidated state laws prohibiting them.

Moore has earned notoriety for his conservative stances

Moore graduated from the U.S. Military Academy, served in Vietnam, and earned his law degree from the University of Alabama.  He served as a circuit judge in Alabama from 1992 to 2000, where he achieved notoriety for hanging a wooden plaque with the Ten Commandments over his bench and beginning his sessions with prayer.

Moore has earned extensive notoriety for his conservative stances and was associated with The Constitution Restoration Act, which was designed to strip federal courts of their jurisdiction over matters involving certain religious liberty matters (Fitzgerald, 2017, p. 512).

Moore was a featured speaker at a conference in Washington, D.C. in 2005 on “Confronting the Judicial War on Faith.”  A number of participants called for impeaching some sitting Supreme Court justices, including Anthony Kennedy, who had written an opinion opposing capital punishment for juveniles and citing international norms (FitzGerald, 2017, p. 514).

Moore, who has launched at least one unsuccessful bid for the Presidency, sought to get the Republican nomination for the U.S. Senate seat vacated by Jeff Sessions of Alabama, who was serving as U.S. attorney general.  The governor had appointed Luther Strange to this position when Sessions resigned. Moore won the Republican nomination, but lost the race to Democrat Doug Jones.

After Moore denied an accusation by a woman who had accused Moore of initiating an unwelcome sexual advance when she was still a minor, she filed a defamation suit against him. Moore countersued. Both Moore and his accuser testified, but in February 2022, an Alabama jury concluded that there was insufficient evidence either to award the monetary damages that Moore had sought or to declare that she had been defamed.