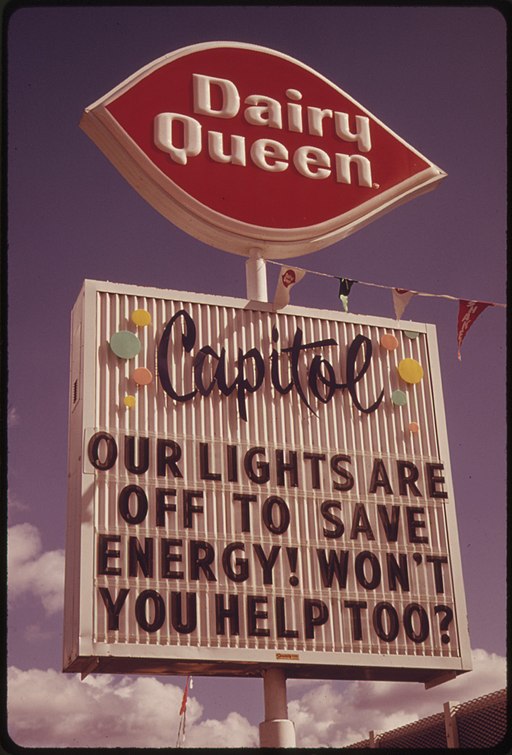 The Central Hudson test was developed by the Supreme Court to determine when commercial speech could be regulated under the First Amendment. It arose from the 1973 energy crisis when New York ordered utilities to stop advertising as a way to try to reduce consumer demand and consumption. In Oregon, the governor banned neon and commercial lighting displays to conserve energy. This 1973 photo by David Falconer for the Environmental Protection Agency shows how Oregon firms used their unlit signs to convey energy-saving messages during the ban. (Image via Wikimedia Commons, public domain.)

The Central Hudson test is the Supreme Court’s test for determining whether a regulation of commercial speech satisfies First Amendment review.  It comes from the decision bearing its name, Central Hudson Gas & Elec. Co. v. Public Serv. Comm. of N.Y.

Commercial speech used to receive zero free-speech protection. The Court declared in Valentine v. Chrestensen (1942) that “[w]e are equally clear that the Constitution imposes no such restraint on government as it respects purely commercial advertising.”

The Court did not overrule this principle until Virginia State Pharmacy Bd. v. Virginia Citizens Consumer Council (1976). In that decision, the Court declared that the old rule was of  “doubtful validity” and declared that “the free flow of commercial information is indispensable.”

While the Court recognized that commercial speech received free-speech protection, it did not create a test for evaluating such restrictions. The Court did so in the Central Hudson case, involving the constitutionality of a New York rule banning “promotional advertising” by electrical utilities.

"At the outset, we must determine whether the expression is protected by the First Amendment. For commercial speech to come within that provision, it at least must concern lawful activity and not be misleading.  Next, we ask whether the asserted governmental interest is substantial. If both inquiries yield positive answers, we must determine whether the regulation directly advances the governmental interest asserted, and whether it is not more extensive than necessary to serve that interest."

The Central Hudson test has a threshold prong – does the speech concern lawful activity and is it non-misleading.  If it meets these requirements, then there are three other prongs:

Justices have criticized the test

The Central Hudson test remains the dominant test in commercial speech jurisprudence.  However, several justices have criticized it.

Most forcefully, Justice Clarence Thomas called for its abdication in his concurring opinion in 44 Liquormart v. Rhode Island (1996), writing: “In my view, the Central Hudson test asks the courts to weigh incommensurables -- the value of knowledge versus the value of ignorance -- and to apply contradictory premises -- that informed adults are the best judges of their own interests, and that they are not. Rather than continuing to apply a test that makes no sense to me when the asserted state interest is of the type involved here, I would return to the reasoning and holding of Virginia Bd. of Pharmacy.”

In the same decision, Justice Antonin Scalia wrote that he “share[d] Justice Thomas’ discomfort with the Central Hudson test, which seems to me to have nothing more than policy intuition to support it.”

In recent years, the Court has increased free-speech protections for commercial speech in decisions such as 44 Liquormart and more recently in Sorrell v. IMS Health (2011). However, the Central Hudson test has survived and is still good law.