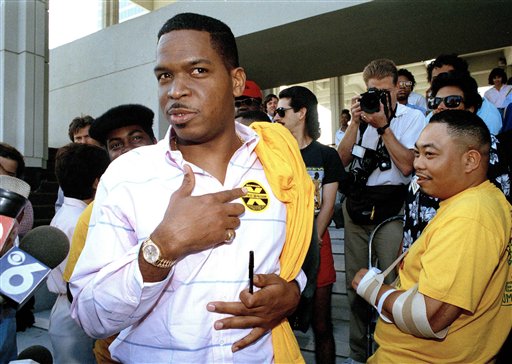 Luther Campbell, leader of hip hop group of 2 Live Crew and president of its record label, points to the warning sticker on his shirt, identical to the one on the group's controversial album "Nasty As They Wanna Be" outside federal court in Fort Lauderdale, Florida, in 1990. In Luke Records v. Navarro, the 11th U.S. Circuit Court of Appeals ruled that an album by the group was not legally obscene. (AP Photo/Beth Keiser, used with permission from the Associated Press)

In Luke Records v. Navarro, the 11th U.S. Circuit Court of Appeals ruled that an album by the rap group 2 Live Crew was not legally obscene.

The decision stands for the principle that music has serious artistic value and, as such, does not rise to the level of obscenity even if it is filled with profanity and misogynistic language.

The controversy began when Broward County, Florida, Sheriff Nick Navarro took actions to prevent record store owners from selling the 2 Live Crew’s album As Nasty As They Wanna Be.

In response, the group — comprised of performers Luther Campbell, David Hobbs, Mark Ross, and Charles Wongwon — filed a lawsuit in federal district court, seeking a declaratory judgment from the court that the album was not obscene and an order from the court enjoining the sheriff from taking further actions limiting the sale of the album.

The federal district court enjoined the sheriff from taking further actions limiting the sale of the album but the court also declared that As Nasty As They Wanna Be was obscene.

The group’s record company, Luke Records (formerly Skyywalker Records) appealed the finding of obscenity to the 11th Circuit.  On appeal, a three-judge panel of the 11th Circuit unanimously reversed.

11th Circuit Court said As Nasty As They Wanna Be was protected by First Amendment, not obscene

The 11th Circuit applied the U.S. Supreme Court’s test for obscenity – known as the Miller Test – from Miller v. California (1973).

That three-pronged test focuses on whether the work as a whole, under contemporary community standards:

Sheriff offered no proof that album was obscene

The 11th Circuit was troubled by the fact that the federal district court judge determined the album was obscene himself without a jury.   The appeals court also expressed concern that the sheriff at the district court level presented no proof of contemporary community standards, prurient interest, or serious artistic value.  The only evidence the sheriff presented was the tape itself.

On the other hand, Luke Records called four expert witnesses, including a psychologist, two music critics, and a Rhodes Scholar who testified to the artistic value of the music.  The 11th Circuit relied on this testimony and noted that the Sheriff presented no evidence to refute the expert testimony that the rap album had serious artistic value.

“A work cannot be held obscene unless each element of the Miller test has been met,” the appeals court wrote. “We reject the argument that simply by listening to this musical work, the judge could determine that it had no serious artistic value.”