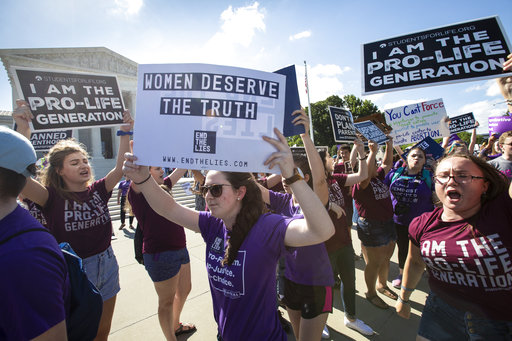 Advocates demonstrate in front of the Supreme Court early Monday, June 25, 2018. The justices handed down a decision that said crisis licensed pregnancy centers in California could not be forced to inform patients that the state ofers programms with several family planning services, including abortion. Many of the facilities were established by pro-life organizations around the country to counsel women against abortion. (AP Photo/J. Scott Applewhite, reprinted with permission from The Associated Press.)

In National Institute of Family and Life Advocates v. Becerra, 585 US ___ (2018), the U.S. Supreme Court struck down two provisions of the California Reproductive Freedom, Accountability, Comprehensive Care, and Transparency Act (FACT Act), that required clinics that provide health service to pregnant women to include certain notices. The Court narrowly ruled 5-4 that those notices amounted to content-based, compelled speech in violation of the First Amendment or were an unduly burdensome disclosure requirement.

On further appeal, the U.S. Supreme Court reversed. Writing for the majority, Justice Clarence Thomas addressed the notice for licensed clinics first. He categorized this notice as a content-based restriction on speech subject to strict scrutiny. “By compelling individuals to speak a particular message, such notices alter the content of speech,” he wrote.

Thomas rejected the 9th Circuit’s approach of applying a lower level of scrutiny to the compelled speech because it amounted to professional speech." This Court’s precedents do not recognize such a tradition for a category called ‘professional speech,’” he wrote.

Thomas reasoned that professionals receive less protection in two instances – when professionals have to disclose factual, noncontroversial information in their commercial speech under Zauderer v. Office of Disciplinary Counsel of Supreme Court of Ohio (1985) and when states regulate professional conduct that only implicates speech.

The FACT disclosure requirement for licensed clinics did not fall into either of these two exceptions. Thomas reasoned that Zauderer did not apply, because “[t]he notice in no way relates to the services that licensed clinics provide.”  He also reasoned that the disclosure notice “is not an informed consent requirement or any other regulation of professional conduct.”

Thomas further warned that when the government regulates professional speech, it could interfere with the marketplace of ideas and discriminate against disfavored subjects. He further reasoned that the disclosure requirement would not even pass intermediate scrutiny because it was “wildly underinclusive.”

Court found the requirement for unlicensed clinics to be 'unduly burdensome'

Thomas then addressed the notice required of unlicensed clinics. He reasoned that even under the deferential Zauderer standard, this requirement was “unduly burdensome” because California had not demonstrated any justification that was more than “purely hypothetical.”

Justice Stephen Breyer wrote a dissenting opinion for the four dissenters. He questioned the majority’s approach, warning that it “could radically change prior law, perhaps placing much securities law or consumer protection law at constitutional risk, depending on how broadly its exceptions are interpreted.”

He reasoned that such laws regarding the availability of medical services are constitutional, citing the Court’s decision in Planned Parenthood v. Casey (1992). He also reasoned that the notice for unlicensed clinics was not unduly burdensome under Zauderer.